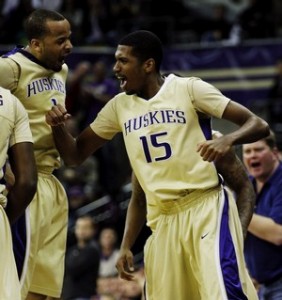 Scott Suggs felt a pop and it turned out to be a stress fracture in his right foot. The Washington guard is expected to miss 8-12 weeks with the injury, a potentially tough loss for a developing Husky squad depleted of 58% of last season’s scoring.

First, let’s put a little context to Sugg’s role as a Husky. He’s a senior and co-Captain of a team touting eight freshman. He scored 7.4 ppg last year and fired a team high 45% from beyond the arc. His three point shot – by percentages – was third best in the conference. He is a senior who has played in and seen it all: two sweet sixteens, won two Pac-10 Tournament titles, and one regular season title. He’s been a part of Husky success. Suggs is a 6’6” shooter and plays a huge role whether he fills up the stat sheet or not. Leadership, particularly on a young team, is critical.

He’s a projected starter, the captain, and lethal from distance. UW needs him so Suggs’ injury can’t be good for the Huskies, right?

Wrong. Suggs’ injury is going to make this team better and here’s why.

The injury allows this young team to develop its identity. It’ll put players like Tony Wroten, Terrence Ross, and Abdul Gaddy into new situations. Gaddy’s been able to play understudy to Isaiah Thomas and, to an extent, Venoy Overton (no one should take life lessons from Venoy); Ross has talent but hasn’t been the man in a UW jersey yet; and Tony Wroten, for all the hype, is still a freshman. Suggs brings classic senior stability to a lineup of question marks – question marks that could quickly become exclamation points – but having him out of the lineup should help to expedite the learning curve.

It could also let the Huskies develop another one of their freshman crop, perhaps Hikeem Stewart, or simply up the confidence of Suggs’ fellow sharp shooter, CJ Wilcox. Ultimately, the Huskies stand to benefit from Suggs’ absence as the senior knows his role and will not throw any wrinkles into the equation upon his return.

Suggs is expected to be back in time for a brutal NYC swing in which the Huskies visit Madison Square Garden to take on Marquette (12/6) and then Duke (12/10). That gives UW six games –all cupcakes besides a trip to Reno to play a tough Nevada squad – to figure out how good they can be without their senior leader.

They should be just fine.