En route, I received a text from my buddy Walter: “Dude, what are you up to tonight?”

“Normal stuff like a HS basketball game,” was my response. Walter went on to throw a party with a “fog machine, strobe light, and lasers!”

Because that’s normal, right? Yeah, both are a little odd and I guarantee you that four mid-20’s males never planned their Saturday night around any game I ever played in.

But that’s exactly what myself and three friends did last Saturday as we headed to Sacred Heart Preparatory for a game featuring Arch Bishop Mitty’s Aaron Gordon. This kid:

As you can tell, the hype is justified and this Bay Area recruit will not soon be overlooked a la the incessant and annoying discussion over who missed out on Jeremy Lin. The ensuing 32 minutes plus 4 overtime minutes were proof enough of Gordon’s talent.

When it comes to uber talents, the gymnasiums tend to fill quickly. Such was the case in 2006 when I saw two Chase Budinger games in San Diego and so we arrived about 50 minutes early to the Gordon show. You know what happens when you show up 50 minutes early to a High School basketball game? You watch a half of JV basketball.

Anyhow, the JV game wrapped and the Varsity squads took the floor. Mitty opened with a four corners drill and when that progressed into some complex variation of a layup line, Gordon opened with a failed but no less impressive reverse dunk in which he dropped the ball between his legs, somewhere down around his feet and powered the ball to the rim. His first move in the layup line equaled all the athletic moves I’ve ever made. Combined.

After a few other thunder moves, the entire officiating crew, took Gordon aside and they all laughingly discussed him no longer touching the rim. It was clear from early on that the emerging (arrived?) super star was a magnet, attracting any and all as new friends. The officials wanted to be his friends, the JV wanted to buddy up, the opposing parents palled around and took photos of their kids with him as they requested autographs of the 16-year-old.

One time a kid asked me for a high-five as I ran past during a half-marathon.

But I’ll cut to the chase. I’m no scout so you can read all about what Gordon is capable of at Scout, Rivals, and 247sports but I’d recommend just finding youtube videos of the kid. Wow. By the way, he’s a Washington lean with Arizona on their heels.

The aforementioned chase I’m getting to is simply the atmosphere of amateur, live basketball. It was raw and pure and fun to be a part. We waltzed into senior night. Do you remember your last home game in a HS uni?

It’s something special and Josh Fox made sure his senior night was indeed that. With just 5.7 ticks left, from just in front of their own bench, Sacred Heart drew up a cross court baseball heave of a pass to find Fox in the distant corner where the mop headed kid hit a flat footed three to tie the game.

Naturally, the home stands erupted as the game was headed to overtime. An extra period in which these final 40-seconds happened:

Gordon delivered, scoring his 27th and 28th points as the game expired. It was over and, the weirdest part of it all, while momentarily rejected, the kids were smiling no matter whether they were winners or losers. Because they were just that: kids playing basketball perhaps for the last time competitively in front of their friends and family, for their school.

The Gordon kid may go on to bigger things but it’s sometimes hard to say he’ll go on to better. It’s tough to beat that Fox shot but game winners are few and far between. No doubt a special moment for the 16-year-old. For everyone.

After all, it was just a fun Saturday night for a couple-a dude’s past their primes.

OK, now two final notes. First, the game footage came courtesy this article. Secondly, you have to look closely at this picture but please notice the keeper of the clock and why, despite 3 or 4 significant timekeeping blunders, no one was able to give her an earful like perhaps you can $30/game HS ref: 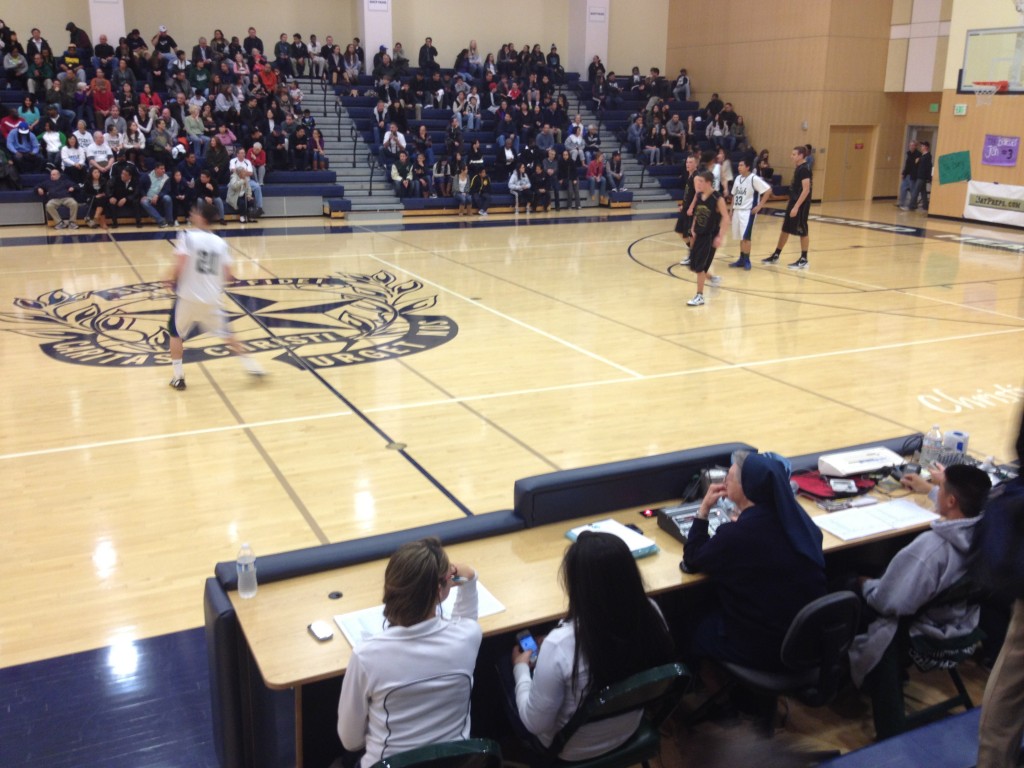