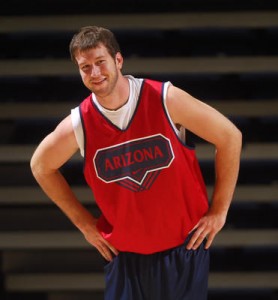 There will be a few more games to play and who knows whether or not they’ll be on CBS or Tru TV or ESPN.

That’s to say, the Wildcats could be dancing or whatever you call an NIT appearance. However you frame it, there’s still a brief amount of season remaining, the slightest bit of Alex Jacobson’s Arizona career to unfold.

The big boy out of Mater Dei, aptly referred to as “Tree,” hasn’t played much at Arizona. He’s battled back injuries and some talent hurdles but by all accounts he’s been nothing short of a great kid, a diligent worker, and dedicated to the program.

He’ll get his degree, five seasons of college basketball, a trip to the elite eight and sweet sixteen, and probably some free drinks somewhere along the way. So what of this seven-footer who once shot 83% from the field and 57% from the line in a season? Who scored fifty career points, grabbed sixty career rebounds, and dished six career assists?

Jacobson is the last recruit of Lute Olson’s to wear an Arizona jersey.

Before the medical leave or KO or Pennell or Sean, Jacobson enrolled at the University of Arizona; a promising center joining the 2007 class of Jerryd Bayless, Jamelle Horne, Laval Lucas-Perry, and Zane Johnson. It was the eighth rated class in the nation that year. Tree was joining a preseason top-20 team with sights on big things.

It happened and here we are, watching the last of the great Lute Olson’s recruits complete his time in the program.

And so when Alex “Tree” Jacobson removes the cardinal and navy for the last time; when a new number 50 is hitting the weights and the track and the Richard Jefferson Gym; whenever that happens, a part of Arizona Basketball history will become complete.

Maybe it’s an era, tenure or the legend of it all. Whatever you want to call it, a piece of Wildcat-lore will become complete, a fond memory building upon countless others, meant to be recounted over-and-over-and-over again as part of a glorious past that’s delivered us to this point today.

No matter where Jacobson suits up for the final time as a Wildcat, remember why he ever suited up in the first place. And how you ever became an Arizona fan.

Olson’s last recruit may be finishing, but Olson’s built something far bigger than a 2007 recruiting class.