If we were to have a preseason montage in the mold of One Shining Moment it’d be full of dudes lifting weights and sprinting and sweating and academically qualifying and shooting mundane jumpers against brooms.

And I’d watch the hell out of it.

Ok so that’s not going to get produced unless Kickstarter makes an accounting error and my grandma’s $25 dollar check gets deposited as $25k. If that does happen, can someone please drop me Vandross’ digits? I got a montage to make. 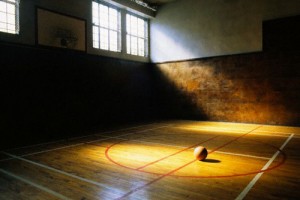 It’s here. Your team will soon be practicing like a Rich Rodriguez off-season workout and you couldn’t be more upset with the pundits’ preseason evaluations; you’re higher on your freshman class’s upside than Vitale on Duke (unless you’re Washington who’s devoid any pups); you’re scrounging the interwebs for sources on team chemistry and you’ve evaluated the best road games to attend and booked a hotel block in Vegas for early March.

But I struggle with this Friday.

It’s practice. Bounce passes and defensive drills and whistles and laps. There isn’t a scoreboard telling me my team is better than yours; the ultimate reason I’m a fan. Sure, I could attend a practice and tell you that guard X looks tough on defense and forward Y appears really bulked up. But until whatever happened since the last buzzer sounded in March manifests itself in Novermber, it’s all speculation. Because even Yi Jianlian’s chair looked filthy in practice.

And I’ve thought a lot about what this Friday means. Is it the beginning of the season? Sorta. I’m still going to be watching football all day Saturday. In moments of off-season jubilation I’d hashtag question #IsItNovemberYet – a meme I didn’t realize had political connotations. So there has got to be a reason I wasn’t curious whether or not it was October.

Well my curiosity rests around November because I want ball games and competition and all of the storylines to unfold. I want to see Sean Miller and Ken Bone in suits, not sweats. I want to see Ben Howland call a timeout. I want to see Tad Boyle killing large game animals. God dammit, I want to see Johnny Dawkins smile.

I get none of that on October 12 (but my birthday is the 14th so I’m definitely getting new clothes – thanks, Mom – and the sappiest damn card – love you too, Pops).

But you know what we do get on 10/12? We get a taste. Just the slightest morsel to chew on for one more month but it’s finally something tangible. It’s like shaking your gifts the night before Christmas to see what’s inside (someone confirm this for me? I’m Jewish). That first official practice is our first opportunity to stop reading about 2016 recruits and start fathoming real things like tempo-full and tempo-free stats. Oh, and wins. Because that’s all that really matters, right?

We’re not there yet. We’ve just arrived at Oz’s emerald gate and now the little guy’s just got to let us in. But that’s pretty damn close.

And I’ll be sure to let y’all know if my Kickstarter funding comes through.