I don’t navigate Palo Alto too well so we were a few minutes late to meeting my pals at The Old Pro. But once we arrived, we crushed a couple pitchers, a sampler platter, and some chicken nachos that tasted a lot more like shredded pork and headed out.

En route to Maples we saw no scalpers.

Our Box Office purchase was little more than entry into the stadium as we wound up sitting darn well wherever we please which reads a lot more assertive than our bleachers-behind-the-shot-clock choice would suggest. 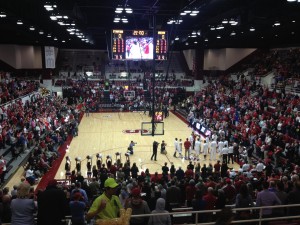 We caught the middle of the Cardinal introductions and were acutely aware of the high school vibe Maples seems to propagate. This isn’t a bad thing. By many accounts Cameron Indoor successfully accomplishes the same, there’s nothing wrong with intimacy. It just makes it somewhat easier to overlook that one of the teams on the floor is the tenth rated team in the nation. Because the crowd certainly did not indicate such.

They more embodied the home team – understandably – as a group with great potential (I’m always curious the earning potential of the Stanford student section) not yet achieved. Nonetheless, the stage was set for a big night as Musburger and Walton had the nationally televised call.

Is it just me or is that a remarkably power tandem for a Wednesday night 11pm EST ESPNU tip?

Alas, the ball was tipped and before possession was even acquired, Oregon had a turnover. I suppose that was going to be the case in this Dominic Artis-less offense but don’t let that be the rationale for the transpiring 40-minutes. What Stanford did was impose their defensive will and contest every shot, force uncomfortable runners, and for Oregon so far out of its comfort zone that they stood little to no chance.

It was a defensive masterpiece that happened to coincide with quite the shooting night. The Cardinal shot a cool 52% from the field and 57% from deep, which is to say they got theirs inside and out. Dwight Powell and Josh Huestis asserted themselves basically everywhere while Aaron Bright was unquestionably in control of the game at all times.

And here was my favorite sequence. With 15:16 remaining in the game and some semblance of an Oregon chance still lingering, the following occurred:

Time elapsed? Twenty seconds to jump that lead to a devastating 22-points. And had Andy Brown’s three fallen coming out of that Oregon timeout it literally would have been my all-time favorite back breaking sequence.

Oregon played poorly, they did, but Wednesday was Stanford’s night. Now I will be curious to observe  exceptions and rules. I don’t think 35% shooting and 20 turnovers is the rule for Oregon. The same applies for Stanford.

But this could be the Cardinal’s tipping point; the moment they remember they are a deep, tough, and talented team.

For Oregon, I see this game as a heat check. They’ve played some terrific basketball but also an unsustainable model. They’d been squeaking past opponents, meddling about the middle of the conference in scoring margin. So like a said, a heat check, perhaps an opportunity to straighten their collar and tighten their tie because the Ducks still have a stranglehold on this conference.

As for me? It was so great to get into that live atmosphere again. It goes without saying but being there is a completely different experience than the television. You’re reminded of the size of these players and the quickness it requires to go three-point line to rim; the explosiveness of a flatfooted dunk; how physical an off-ball screen is.

I love getting to tell these stories because there’s so much going on in that 94×50 foot rectangle of hardwood that I just can’t get enough.

One thought on “A Trip To Palo Alto: Ducks and Beers Crushed”