Their colors alone have been known to evoke a visceral reaction. It’s been said that they develop billboards that will make you scratch your head. They have attended fewer NCAA tournaments than Arizona has Sweet Sixteens. Their antics have been celebrated by the Daily Show. The brand they’ve created has been associated with a Chicago gang.

They are…the least interesting basketball program in the world.

To say that Wildcats dislike Sun Devils (and the converse) is an understatement.

So I went to Ezra, Brad, and Scott, three with Navy and Cardinal blood and Bear Down hearts, to tell me what they thought about it. Ezra (EA) is a great writer at PointGuardU and a knowledgeable twitter follow; Scott (SC) also delivers it on the twitter and contributes to SB Nation’s hoops coverage; Brad (BH) and I have been through the trenches of Wildcat fandom and have exchanged fourteen copies of War & Peace worth of texts, gchats, emails, and verbal communication re: Wildcat hoops.

I will note that any efforts to get a Sun Devil involved in this Q&A went unresponded to. Anyhow, I’ll let these guys take it from here:

Do you hate ASU? If yes, why? If no, why not? I challenge you to be brief.

SC: Yeah, I’d say I’m not too fond of our sister school up north. It’s just a shame their basketball program isn’t worth a damn, because I’d love a natural in-state rivalry where one team hasn’t won 95 percent of the games over the past three decades.

EA: Hate is a forceful word and one that shouldn’t be used on a basketball program that has reached the Elite Eight just once in the past half-century.

BH: This strikes me as an opportunity created by @pachoopsab for @pachoopsab to talk about doing a lap around Wells Fargo after Sean Miller’s first team waxed the Sun Devils in Tempe. I’m not sure I have a favorite memory, but if I had to choose, I would pick between two: 1) Arizona fans packed into Wells Fargo arena wearing shirts that simply said “1997” (I don’t remember the outcome of the game); or 2) Lute Olson responding to classless ASU fans by pointing at the scoreboard. 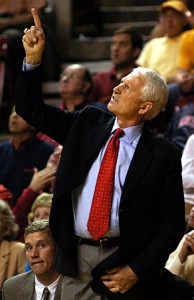 I wonder what those numbers mean?

SC: Salim Stoudamire drilling a jumper from the elbow to sink ASU at home back in 2005. It was loud in the arena that day, and when Stoudamire’s shot went in, there was nothing but silence from those wearing gold.

EA: It has to be Salim Stoudamire’s signature, last second jumper to beat ASU in March of 2005 to clinch Lute Olson’s record breaking 305th Pac-10 victory and an 11th conference title. Despite 25 points from Ike Diogu and a double digit second half comeback, the Sun Devils couldn’t help but watch the All-American Stoudamire smoothly drop in the dagger.

BH: I’m going with Bill Frieder here. Bill was the kindly in-state coaching foil for Lute Olson during a few years in the 1990’s, and even experienced some limited success. However, there was never any question that Lute had the upper hand (even in local commercials satirizing the “rivalry” between the coaches). To put it another way Bill coached the Generals and Lute coached the Globetrotters.

SC: I always liked James Harden, even if he killed Arizona throughout his career. His game is just so smooth.

EA: I’m going with an unconventional choice here with Derek Glasser. A key part of the historic Three Game Win Streak up in Tempe, Glasser was annoying as heck on a few spring afternoons but it’s impossible to not respect what he did under Herb Sendek’s offense. He finished his career as the ASU record holder in assists and games played, a sign of his durability and knowledge of the game. At 6’1, he was never destined to be NBA material but had everything a fan could want in a college point guard.

There was some Twistophere spice going on between Jahii Carson and Mark Lyons (I think one of you started it), what do you expect to see from these two on Saturday?

BH: If we’re talking about Lyons on Sunday, we’ll be talking about his defense. Maybe we’ll see Nick Johnson and Lyons double team Carson—worked for DePaul. But then, does Arizona’s already porous perimeter defense risk leaving Carrick Felix or Evan Gordan open beyond the arc? My expectation: post-game pub is directed at someone not named Lyons or Carson.

SC: I think they get after each other all game long. Lyons has the size and strength advantage, while Carson is incredibly quick and seems to play at a crazy level when at home. I’d be surprised if both players don’t have upwards of 15 points.

EA: Although crazy things are always known to happen in rivalry games, I expect much of the norm from both of the starting point guards. Lyons will continue to frustrate Wildcats fans at one moment with sloppy passing or contested layups and then awe them the next with a dazzling drive to the bucket. Carson will be asked to put up another 20 point, five assist type performance to keep the Sun Devils offense facilitating.

What do you love about this Arizona team?

SC: After essentially playing all last season with one player in the rotation above 6’6, the size Arizona has in the paint is a welcome addition. And other than the San Diego St. championship game in Hawaii, UA has shot free throws very well all year. That’s always nice for one’s blood pressure.

EA: Without hesitation, the answer is Lyons. Although he can often force up NBA range threes and drives to the lane only supposed to be attempted by Derrick Rose, he knows how to close games out. After seeing Arizona struggle in the final minutes of play repeatedly last season, it’s a relief to know there is a guy on the roster who has all the confidence in the world that he will make the game-winner.

If you had one super power what would it be?

SC: The power to make Kate Upton love me.

EA: This is a question I’ve pondered since second grade literature arts class and in the years since, only one superpower stands out above the rest: time traveling. I mean who wouldn’t want to be able to revisit in person Eddie House’s 61 point night in Berkley or Miles Simon’s 3/4 court “Do You Believe In Miracles WHAT?” buzzer beater?

Give me your tears gypsy thoughts on the freshman class now halfway through their first season in Tucson.

BH: They’re probably doing about as well as we should have expected. That being the case Arizona has won games in spite of them, not because of them this year. They’ve shown flashes of greatness on par with their potential, but as fans we’re still waiting for the monorail we were pitched. But if one or all of the freshman can steadily improve between now and March this team will be hard to beat rather than just dangerous.

SC: It’s been a mixed bag so far, although they’ve all shown flashes of being studs. Jerrett and Ashley really got after it against Oregon State after being challenged following a lackluster showing in Eugene. As they continue to get accustomed to the grind of a college season, the sky is the limit.

EA: Not all freshmen are going to be Anthony Davis, something Big Blue Nation is learning a lot harder fashion than Arizona fans this year. As for the trio of big men in Tucson blooming like the flowers on prickly pear cacti, patience is the key word. While all three have shown glimpses of their potential, inconsistent play is inevitable. Even when not playing at the level Sean Miller expects of them this point in the season, Tarczewski, Ashley, and Jerrett still bring much needed size that Arizona fatally lacked the last time it drove up Interstate 10 to play the Sun Devils.

Alright, I know you guys watch all the games so you know best…what happens Saturday in Tempe?

BH: I think Arizona feels like it has something to prove after getting out gunned in Eugene. If they can channel that into some defensive intensity I like their chances. On the other side: this is the Super Bowl for ASU and its fan base. I look for ASU to come out swinging and land a few punches early; I expect attendance to increase 200% (and still not sell out); and I expect ASU to lose by 8. In short: if the Cats keep Jahii from doing his thing (which they can, just ask Kenny Boynton) the Sun Devils will have more problems than they always have. Arizona wins 78-70.

SC: I think it’s a pretty close game throughout. I wouldn’t be surprised to see ASU move out to an early lead with the crowd behind them, but their lack of depth will show in the second half. In the end, UA’s experience and talent advantage off the bench leads them to a 77-73 win.

EA: Predictable at this point, Arizona State will keep things close and probably hold the lead for a good portion of the game. Bachynski should torment Tarczewski in the paint and the Sun Devil shooters always seem to feel a little bit hotter from behind the arc when the opponents are wearing navy blue and cardinal red. In the final minutes however, Arizona’s depth and the dominance of Solomon Hill will be just too much for ASU. It is a rivalry game so anything can happen but come Saturday night, I don’t think Carson will be typing out any snarky 140 character comments.

As our contributors note, Wells Fargo will be unrecognizably rocking; the game tight and competition fierce. The Wildcats should win. I’ve been there for this one, as BH mentioned. I wish I could be there Saturday and I hope that you are. Tweet me some pics and wish me luck streaming this thing on an SWA flight sitting right next to the best Wildcat I know, baby brother.

One thought on “An Arizona Rivalry Breakdown: Q&A with Cats”