In case you missed it, I’m heading to Boulder and the only thing I know about the game is that I’ll be in red and cheering for the red and blue team and wearing every jacket I own. So I reached out to Ben Burrows (@Rumblinbuffalo), a great Buffs fan and hoops ambassador and the mastermind behind The Rumblings of a Deranged Buffalo, for a little guidance. Mind you, Ben’s blog is a daily read and dives deep into the depths of beers to drink during CU football games, fandom, and the state of his beloved HoopBuffs. Enjoy.

A Visitor’s Guide to the Coors Event Center.

The Coors Events Center may not be on anyone’s list of great college basketball venues, but, as I’ve discovered over the years, it can be a great place to watch a game.  Called everything from the Keg to the Foam Dome, what I simply label as the CEC has recently become one of the toughest arenas in the West to steal a road win from.  To whet your appetite for Thursday’s CU/Arizona grudge match, let me introduce you to the “Home where the Buffalo Roam.” 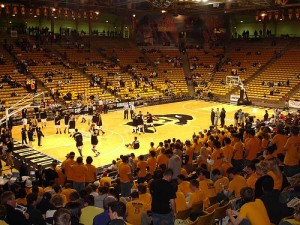 Built in 1979 to replace the antiquated Balch Fieldhouse, the CEC stayed mostly the same for its first 35 years of existence.  A bleak concrete exterior lead many to believe it was the campus fallout shelter.  Quite the contrary, as the CEC has been the exclusive home to CU’s indoor teams, the site of countless tests and finals for entry-level classes, and host for big events like two rallies for the President last year.  The CEC was where I received my BA in the winter of 2006, and I even saw a Cake concert there a few years back.

Recently, the athletic department has decided to put some real money into the old girl, sprucing up both the interior and exterior.  Since the mid 2000s CU has added dedicated coaching facilities (basketball offices used to be located across campus at the football stadium), a new winter sports weight room, new locker rooms, new video and ribbon boards, a brand new media center, new ticketing areas, and, most importantly, an $11 million practice facility completed in 2011.  It’s no coincidence that CU’s fortunes on the court started to perk up as each step of the facelift was completed.  As a result, we got to further spruce up the interior this fall: 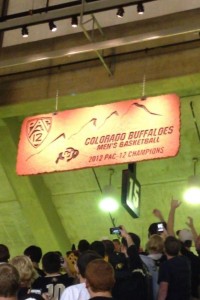 Of the 11,064 seats in the building, there isn’t a single one that I would call a bad seat.  There’s no obstructed views, no wasted space around the court, and, much like the Pit in Albuquerque, the seats drop from the entrance level, creating a sweaty cauldron of sound.

The elephant in the room is altitude.  The arena famously sits at 5,345ft of Rocky Mountain high altitude. For the purposes of competitive psychology, any Colorado sports fan is quick to tell you that, at over a mile above sea level, you’re taking in about 17% less oxygen with each breath.  We’ll eagerly spin tales about headaches and lethargy, warning that your favorite team could possibly drop dead simply by running out of the tunnel.

I hate to ruin the surprise, but it’s mostly bunk.

Unless we suddenly decide to start playing in Vail, there’s little risk of altitude sickness effecting play.  In all honesty, you’re probably better off breathing our rarified air than the smog-filled stuff in Los Angeles.  Just drink a little bit more water (my first lesson in the CU Marching Band: water is your friend), and you’ll avoid most of the side-effects.

Then again, maybe there is something to it.  In the #RollTad era alone, the Buffs are 41-5 against all opponents, and all CU sports win at a 70% clip in the CEC.  Call it altitude, basic home court advantage, whatever… the Buffs are just damn good at home.

So, feel free to come up to Boulder.  We’re (mostly) friendly, and, other than your favorite team losing, you’ll have a great time

If you do decide to pop out to Boulder for a game, here’s a quick guide for out-of-towners.

Just like in monopoly, it’s free.  Yep, free.  CU reserves a few lots for donors, but otherwise it’s fair game.  This fact alone makes CU basketball one of the best sporting entertainment values in the region.  Traffic control on the exit is a little rough, however.  Be prepared to sit for 10-15 min.

I had always been a fan of the hot dogs at the CEC, but I think they changed the supplier.  They’re simply  substandard this season.  In their stead, overall concourse offerings have improved with the inclusion of a carvery station (east side), an asian-esque noodle option (SE corner), and a BBQ stand (west side).  Nothing too special, to be honest.

Not available, unless you can sneak into the club room located in the bowels of the stadium.  For season ticket holders only, the club room serves beer and wine in addition to a rotating menu of pre-game meals.

In game cheer/band things to look for –

The Buff Basketball Band has become semi-famous in recent years for being obnoxiously large and loud.  At a maximum of 125 pieces, they may be the biggest group in the country.  Their “Tuba Cheer” at the 8-min second half timeout has been a staple for years.

The C-Unit.  I may have talked down to them a few weeks back, but they’re legit.  Of their many shenanigans, the “roller coaster” right before the start of the second half may be the best.  Make sure you’re back in your seats for that.  Also, their big heads are getting better every week.  The Spencer Dinwiddie with the spinning mustache is probably the best.

The closest and best is the World Famous Dark Horse.  A 15-minute walk away from the stadium, it’s your typical dive, only with “character.”  The dark, wooden, junk-filled interior has seen plenty of craziness over the years, and that place is my #1 recommendation for visiting fans.  Need a few whiskeys to prepare you for the madness?  They’ve got you more than covered.

They also happen to make some of the best burgers in town.  My favorite is the Jiffy Burger.  Topped with provelone, bacon, and peanut butter (yes, peanut butter), it’s much better than it sounds.  For those of you with more traditional palates, try the fried egg and ham burger (what it sounds like) or the royale burger (ham, BBQ sauce, and an onion ring).

Outside of the Horse, there are plenty of options over on Pearl Street in downtown Boulder.  For drinks, check out the Sundown Saloon (cheap beer, pool hall, dive), the Attic (try the “Fat Albert”), and the basement bar at Salt (expensive, but fantastic cocktails).  Johnny’s Cigar Bar is a great place for a cocktail and a victory smoke.  Food?  The best combination of price, quality, and options is at the West End Tavern.  The Kitchen, and it’s accompanying bistros Upstairs and Next Door, is also great, if a little pricy.

Still haven’t found anything you like, try The Sink up on the Hill.  It’s good enough for the President.  Half Fast Subs has an extensive sub list, and great pitchers.  Try the “Strong Island.”

With that, I know exactly what to do at The Keg: wear my red shirt, Bear Down, and eat a buffalo burger. And now I know where and how to do all of that in style.

Big thanks to Ben! Give him a follow and a read.