The sixth ranked Wildcats head to the arena formerly known as Cox tonight. They’ll give just one point in taking the court against a team, SDSU, who has beaten them in two of their previous three encounters. Does Fish have Sean’s number? I’m not sure but I’m trying to get to the bottom of all things SDSU – a school with which I shared a city whilst a collegian. I’ve attended a game @SDSU and it was hilariously fun. I don’t usually preview games but when I do, I want it from the horse’s mouth and so I’ve grabbed co-worker, friend, and SDSU alum, Steve McDevitt, about his alma mater. After all, today is his birthday.

Now it’s worth noting that Steve recently became Poppa McD (otherwise known as “dad”) to the handsome and jet setting, Logan. He tells you about their adventures, misadventures, and beer on his blog, Pampers N Pints. And now he he answers my inquiries about SDSU hoops:

On a scale of one-to-there’s-a-statue-of-him-outside-of-Pauley-Pavilion, how much does Steve Fisher look like John Wooden? 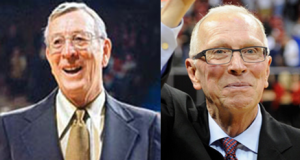 The only show unfortunately on in my house these days involves catty, orange debutantes donning seven pounds of makeup and more extensions than the Geico claims department. I’m going to have to phone a friend here, Regis, and bring Aztec aficionado and starting power forward of my wedding party, Tony Busalacchi.

This is the part where we introduce you to Tony with an anecdote from him on his fandom:

Best story I have is I went to the Spurs vs Kings game when Jimmer and Kawhi faced off for the first time in the NBA,  Malcolm Thomas and Kawhi were on the Spurs.  I yelled at Malcolm across the court and yelled Aztec4life and pointed at my SDSU shirt.  Malcolm pointed my way and gave me a nod.   There really is a special bond between the players, students, & Aztec die hards that have witnessed a team that only won 3 games in Fisher’s first year to consistently being one of the top teams out West.

So basically I’ll be interviewing Steve and an Aztec fan from here out. “T” represents Tony. “S” represents Steve. Genius.
So to you, Tony, your thoughts on The Show?
T: I used to sit with The Show back in 2000-2001 when it was just a few members, but I was never a part of The Show.  I remember heckling Bobby Knight when he was the coach of Texas Tech and got him to look my way with a mean stare.  I  personally love the creativity of The Show. They are the original creators of the big heads. They truly intimidate visiting teams and do a great job getting under their skin.  The show also does a great job getting the rest of the fans into the game and developing a great home court advantage for the Aztecs.

Moving on to actual round ball, Jamaal Franklin sure was good, so good in-fact I read he was the only D-1 player to lead his team in points, rebounds, assists, and steals. How are the Aztecs going to replace that production, along with that of Chase Tapley and DeShawn Stephens? This is otherwise known as the what is SDSU good at question.

T: Last year Maal was Mr everything for the Aztecs.  Tap was just  plain clutch. Early on will be a challenge as the team develops an identity.  As the year goes on, I feel we will be much more balanced and in fact have a better year even though we lost some key players.

I read somewhere that Josh Davis is basically Kawhi Leonard. Is Josh Davis an NBA runner-up?

T:  Josh Davis does play like Kawhi & actually looks like him also.  He is a tenacious rebounder, freakishly athletic, & has a nose for the ball.  Josh will create his own legacy before the year is over

How awesome was The Beachcomber’s Thursday night, $1 You-call-its in college?

S: I don’t remember so… yeah… it was pretty awesome.

S: Back in 2004 or so, Arizona visited SDSU and we discovered that we could buy $3 student tickets and sell them to Arizona fans for $125 a pop. Rivalry? Not so much as we were gladly taking 800% better than our Jamba Juice salary. Although a battle between an Aztec warrior and a Wildcat might be a good match in the wild, so yes, I’d say it is a rivalry after all.

T:  I think AZ vs SDSU is going to become one of the best rivalries on the West Coast.  These are going to be THE two premier teams out West for years to come.  Shepard will be a breakout player for us this year.

Well that’s going to do it. Thank you Steve and thanks for jumping in Tony. Vegas says it’s going to be a ball game. I think we’ve got two teams that match wildly similarly: defensively oriented with a knack for rebounds. The x-factor could boil down to guard play where Arizona has an advantage with McConnell and Johnson above senior and WSU transfer, Xavier Thames. But here’s one additional thought: As both teams tout their strengths in the front court, this game could boil down to a power of wills. Strength vs. strength. Such match-ups often turn into epic games (see: 68-67, Arizona in Maui last year, also see below). As Tony mentioned, 6’8″ Winston Shepard is poised for a big year. The Aztecs are going to out-size many opponents and that will bode well for them in the MWC. This is the Pac-12 and Arizona has an NBA-esque front court that will gladly bang with the Aztecs (KALEB WANT CONTACT).

Worth noting: there’s a rostered SDSU player who’s last name is U’u and I think The Show is trolling at its best/worst/core.

One thought on “Interview with an Aztec: Previewing SDSU”