If you’re not familiar with Grantland’s Year in Holy S***!!!, familiarize now. In a swift Bart ride back to my house I was taken out of the stat holes of KenPom and hoop-math and reminded that SPORTS! Watch that Steph Curry highlight reel and tell me you don’t get goosebumps as he drops trey on the Nuggets, turning to their bench before net.

Alas, this is a Pac-12 blog and holy shit happens here, too. We’re about to dive into it. But to further preface this reactionary and sudden expulsion of disbelief; before unveiling the moments that had as out of our chairs, jaws gaping, eyes wide, SMHing all over; prior to that, I’d just like to say that these are the things that have us coming back. Fandom, for better or worse or otherwise, allows us to get lost. Why we stand and shout. Holy shit. Bravo.

Here are a handful of those times from Brad, Ben, Matt, Jason, and me in no particular order.

Jason of AllBuffs.com– The Monitors at McKale moment game started late for me.  I was in the car in a part of Colorado that severely tested KOA’s claim of “3 countries/38 states” motto.  When I arrived at my destination, not exactly civilization, but a place that does have DirecTV, (luckily the game was on ESPN) I turned on the TV and my first “Holy Shit” moment occurred.  CU was up, by double digits, in McKale, “Holy Shit indeed”.  Over the remaining 15 minutes of the game, the rest of my party arrived, the beers and wine were flowing and then the FT’s started clanking, oh those FT’s. When Mark Lyons made his second free throw with 10 seconds left, I stood up and I didn’t sit down for several minutes.  Sabatino Chen ended up with the ball in his hands with 3.5 seconds left, it wasn’t pretty, it wasn’t designed, it was….. BANKED, but it did go in.  There were high fives and then a “wait a minute, they’re reviewing it”.  It was good, it was definitely good was being echoed throughout the room.  Then it began, the slow walk toward the TV, the room was hushed, the volume was cranked and everybody was gathered around a 52 inch high-definition TV. 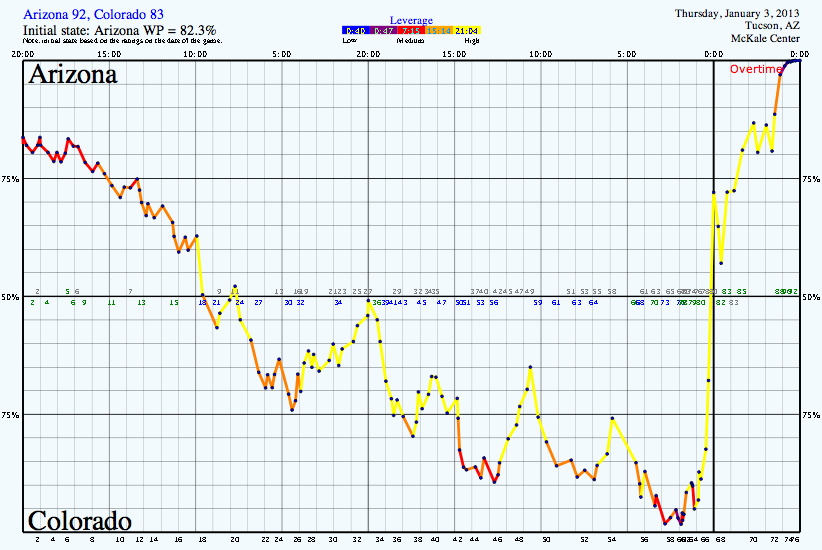 Over and over we watched, angle after angle, hands now ON the TV, “no-it’s out right there, it’s good, the red light isn’t on yet”.  Then it happened……”HOLY SHIT” they called it no good.  F-bombs were dropped; BS’s thrown around and the air had been let out of the room.  I don’t remember the last 5 minutes of the game, all I know was that CU lost, but I will never forget that “HOLY SHIT” moment and that I was in the middle of nowhere, with high-definition TV while the refs  standing courtside were stuck with the standard-definition variety

Adam – I’d watched as my Wildcats made a furious comeback from the most three pointers the Buffaloes would hit in a single game all season. Well, it was going to be the most until Chen happened. Head down dribbling out the clock he heaved it up and you know the rest. I was here with friends and had conceded Arizona’s loss. We watched all of the angles and I even broke things down for my houseguests exactly how, if I were one of the officials, I’d bury my head in the monitor, confirm the call with field goal arms and bolt off the McKale floor. I bolted out of my living room to demonstrate. But when I returned, the officials were waving the whole damn thing off and…HOLY SHIT. Hey, Cats win and Mark Lyons doesn’t give a rats ass about how nice Sabatino’s hair is.

He Touched the Ball x5 and Cancun

Adam – From my Vegas vantage point following the UCLA-Arizona game I had this to tweet which, as you’ll notice, when unreplied, retweeted, or favorited. For shame.

Really intrigued to see the Sean Miller presser. Wouldn’t be surprised if L. Scott had to talk to SM afterward

Well then what happened?

AND THAT’S SOME STRAIGHT NOSTRADAMUS ACTION PEOPLE. Anyhow, in our hotel room, we watched that presser another 3-to-fifteen-hundred times because oh my holy shit goodness Sean Miller wasn’t happy. There’s more spice in that presser than an Indian dish. There’s more heat in Miller’s words than a dutch oven under plastic covers. There’s more flame in those eyes than under Ken Bone’s seat. Ask the Pac-12 representative Miller “didn’t” berate but rather who was the closest in proximity as he screamed innocuously down a hallway. And then Goodman’s news broke and maybe this is the true holy shit of it all? We wound up with an officiating scandal that I had to digest in phases. $5k and a trip to Cancun is some watered down Illumanati action. And now replay the presser.

Jahii Drops 40 on The Strip

Adam – Sure it was a career high and sure the Devils needed every one of his double-score scoring output from Carson. That’s undoubtedly some MVP stuff. Carson connected on 16 of his 25 shots inside the Thomas and Mack and that’s a pretty damn efficient 40 points. But wait, there’s holy shit coming. Because the 5’10” Carson made 14 of those 16 shots as layups which basically just says to me that Carson stared down the Rebels and their 7 blocked shots per game to announce to everyone that, “I AM JAHIISUS. I AM SO GREAT THAT I HAVE FORCED HERB SENDEK OF SLOTH PACED OFFENSES TO COMPLETELY BURY THE FOUNDATION OF HIS OFFENSIVE PHILOSOPHY AND THE STYLE IN WHICH HE BUILT HIS CAREER IN ORDER TO KEEP HIS JOB AND LOCAL TALENT. AT LEAST HE CAN NO LONGER LAMENT JAMES HARDEN’S DEPARTURE. I AM JAHIISUS.” And then he beat Marquette in Tempe to secure the first Sun Devil win over a ranked opponent since before Todd Graham was associated with other coaching jobs. Harden, who?

Askia Booker Doesn’t Give a Jayhawk

If safeties-free, all-balls performances like 17 points as a freshman in the NCAA Tournament, or a sizzling domination of a non-conference run in Charleston as a sophomore didn’t let you in on the secret, let me clue you in: Askia Booker was born to get buckets.  Important buckets.  Season-defining buckets.

So, when Kansas, dominator of all things Colorado Basketball for generations, makes the mistake of getting into a see-saw affair in the snake-pit-that-Tad-built, who else could CU turn to with the game on the line?  Not Josh Scott.  He’s too smooth, too nice.  Not Spencer Dinwiddie.  He’s too conventional, too ‘efficient.’

No, you need insanity.  You need a player with no conscience, no understanding of the stage upon which he steps.  You need, to be brash, a player who does not give a f***.

And so, 80-feet from the basket, with three seconds left on the clock against that team, the under-recruited dynamo from South LA – off-center goatee, and all – was the player in silver getting the ball.

One dribble, two.  Still too far from the hoop.  Better euro-step to cover some ground.  Square up, leap, let fly.

Watch the gif.  Count the fucks given by Booker.  There are none to be found.  After release, he just stands there, as if waiting for the oncoming train of noise.  Waiting for us, the fans, to realize what he has just pulled off.  He was born to hit that shot.  He was born to euro-step into that shot.

Almost four years ago, Colorado was in a similar situation against the hated Jayhawk.  Clock ticking down, tie game, ball in hand, CU had a shot to stun the #1 team in the land in the time-before-Tad.  In that moment, it was Cory Higgins who was called upon.  Higgins, the program’s co-leader in scoring, wasn’t up to the moment, and air-balled his dance with history.  Looking back, it all makes sense.

Booker is everything that Higgins is not.  Higgins was calm, cool, collected.  Indeed, sophisticated.  James Bond in shorts.  Booker is the junkyard dog, barking at everything in sight.    John McClane in Black and Gold.  Higgins may have been more talented, but Booker has the want, the need to hoop.  The balls to steal headlines from future NBA bonus babies.  The grit to walk across broken glass when needed.

I could twist myself in knots talking about how the game, the win, the shot meant something for Colorado, for Booker.  In the end, there’s nothing but the inbounds, the euro-step, and the pure, un-adulterated brashness of Ski and his moment.

Matt of AddictedtoQuack.com – Given Oregon’s lack of depth in the front court this season, the addition of a quality player like Mike Moser was definitely a wanted surprise to Duck fans.  Keeping him away from Washington was just an added bonus. Moser brings leadership, talent, and immediate play-ability to a position that was vacated by fan favorite, Arsalan Kazemi. Moser also fits perfectly into Dana Altman’s high-post wheel offense.  His ability to stretch the floor, handle the ball, and pull bigger defenders away from the hoop compliments Oregon’s guard focused offense. To say that Moser joining the Ducks this off season was a Holy Shit moment is putting it lightly.

Brad of Portland –  If you were watching that dunk you were like, HOLY-SHIT-KNOCK-KNOCK-WHO’S THERE-BOOOM-SHAKALAKA-F***-YOU-DARREN-SHARPER-HOLD MY DICK! Then you put a hand over your mouth, made a noise like you were watching Kevin Ware shoot a jumper in a regional final, and wept like you saw a double rainbow.

RHJ doesn’t dunk his nigiri in the soy sauce, he slams that shit down so hard he cooks the fish. He is not a role model. Just because he can dunk a basketball does not mean he should raise your kid. Anyone raisin’ that kid is laughing their way to the bank faster than Earl Woods. The rest of us are just wiping our own kid off the Christmas card and sending a photo RHJ posterizing the entire Aggies basketball team instead.

RONDAE!
Larry Drew Two’s Icy Veins Meet Icy Shabazz
Adam – LD2’s season in and of itself was a giant surprise. He was the rock his coach couldn’t quite be and the his prima dona wing wouldn’t be. For all the heat he’d taken in leaving Carolina across 12-13 Drew was a leader and it was fun to watch. And then to see those who we cheer for and appreciate succeed is great! So as Drew took that pass and slashed through the lane and hit a fading, elbow jumper to sink the Dawgs and maintaining their spot atop the conference – the conference they’d go on to win – I was impressed and jaw dropped. Holy shit as it were.

But in that gif you’ll notice the sulking shoulders of a neon shoed gentlemen. He’s left handed and was no where near a position to necessarily get a basketball with a waning clock and whining attitude. And yes I just said “whining attititude” which is the same crap my dad would drop on the Blue Rhinos – my 11-and-under baseball team.  Whiny attitude is a phrase reserved for juveniles but that’s about what not getting the ball when you want the ball equates to. It was the moment that perhaps personified everything that we didn’t know but felt UCLA’s season would become. Holy shit did he really just big league his own team off an icy cold buzzer beater? He did, and now it’s Steve Alford’s team (which was a holy shit in and of itself).
Two Teams AND Two Numbers
Adam – With two, citations of the number two, this. But when Oregon visited Pauley on Saturday January 19, 2013 it was the first Pac-12 Conference game featuring two ranked opponents since March 2009. What two words come to mind here? Holy and shit. Four years it took to get to this place and it was 21 vs. 24? And the road team won? Man oh man had this conference hit rock bottom. There would be just one more contest between ranked opponents that season (see: Ball, He Touched the)
What did we miss (lots no doubt)?