The Golden Bears of Cal have jumped out to a 4-0 conference record. Three of those wins are on the road and I love road victories. I also love getting swept up in momentum and the promise of what could be despite a slight sample set. Hey, getting lost in the moment is part of being a fan. Beautiful, right?

But there might be something bigger than just a moment or momentum to what these Bears are doing. It might be worth thinking about it because:

@Drake4444444 @pachoopsab Remember back when Gottlieb picked Cal as like #10 in the nation preseason? Don’t seem so crazy all of a sudden.

Alas, we could have a full conversation about Gottlieb but that not the point although I think he did have a point with regards to their team.

I love Cal’s lineup and I said as much in October. Veterans, youth, big, small, shooters, bangers, these Bears have pieces that can do some of everything. The only question was would they show up? Namely, would Richard Solomon please stand up? He has.

Solomon has the eighth highest DR% in the nation – an increase of more than eight percentage points from last season. He’s improved his eFG% by more than 20% (48.1% to 58%). And he’s decreased the number of fouls he commits extrapolated across 40 minutes by 27% (5.2 down to 3.8). As I’ve said before, the immediacy of graduation can be a confidence stimulator.

And if tempo-free isn’t your thing, Solomon is averaging a double-double each night on the court (12/10) which naturally are both career-highs. And speaking of double-doubles, he’s recorded six of them this season. In 79 career games prior to this year’s 15 games, he recorded just two. To pile on, he’s doubled the number of basketballs he steals per game.

I also see it as no coincidence that amongst Cal’s four losses, Solomon didn’t play in two of them and in the other two he posted his worst and third worst ORtg games. Did I mention he’s improved his ORtg by 8%? Dick Solo is doing work. 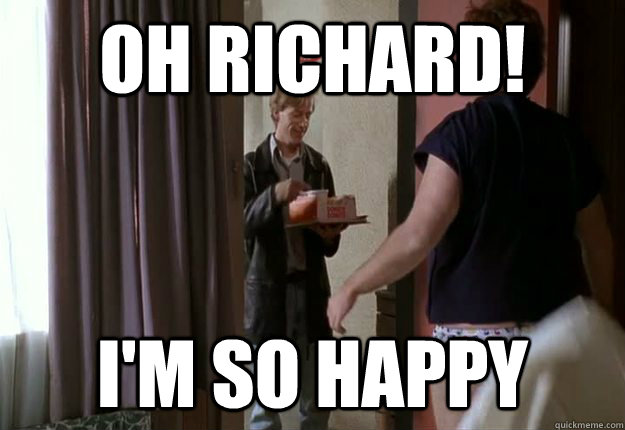 Furthermore, if you’ve paid attention to the blog, you’d know I have something of a crush on hoop-math.com. It’s where I got to learn about things like:

Very important site that allows me to create awesome charts that my friend Jamie hates and others seem to like (tangent). What I mostly love about hoop-math is that it allows us to understand the obvious. More succinctly, it confirms our hypotheses that things like “taking more shots at the rim will increase your offensive efficiency.” Which is indeed a theory of mine and one of the first things I check when examining a player or team’s improvement or otherwise.

Well to this point we’ve discussed the gross improvement of a certain Cal Golden Center to which I present Exhibit Solomon: 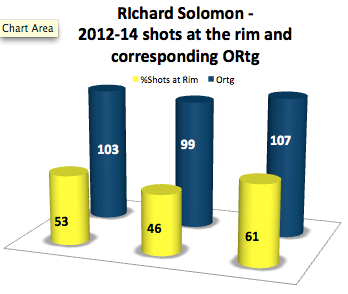 First, and to be honest, I’m still refining my Excel game so bear with me as our X-axis is devoid context (it’s last three seasons). Secondly, notice the correlation between Solomon’s shots at the rim (yellow) and that same season’s ORtg (navy). When he’s around the basket he’s more effective. Solomon is putting up the highest offensive rating of his career (apologies that hoop-math doesn’t go beyond the 2011-12 season) while putting up the most shots he’s ever taken at the rim.

Richard Solomon was going to be a big reason Cal did whatever they were going to do this season.

And thus far he’s been big.