For some time now I’ve speculated about the Oregon Ducks’ defense. I’ve had my concerns about it but I was having a difficult time picking on a team that was 13-0. I also couldn’t pinpoint the issue. If any at all. Perhaps I need to up my criticism game? But since winning their lucky thirteenth, the Ducks have stopped exactly no one from scoring.

Without the advantage of having watched a ton of Oregon basketball and with the advantages of having a social life and a highly analytical mind (which behooves me in sports and torments me in dating), I’ve come to the following conclusion about Oregon’s defense: they’re the perfect storm of bad. I’ll explain.

On Dana Altman’s roster, there are just a shade under two million guards. Loyd, Artis, Joseph, Calliste, and Dotson make up one of the most formidable back courts I’ve ever heard of. Offensively that is. Otherwise they’re a group contributing to the nation’s 152nd best defense. My assumption has been that the guards aren’t carrying their weight considering four of their top five players in terms of %min are guards. So I don’t think they’ve done their light front court any favors.

I’ll begin anecdotally and tell you that, certainly in their conference games, this perimeter group hasn’t done much to limit dribble penetration. It’s what my Buffalo friends told me. My Cal friends told me it had to do with an inability to protect the paint. Even my Oregon compatriots confirmed.

But anecdotal tales of a perimeter defense lost at sea aren’t going to cut it here. This is PacHoops and while I talk to some of the most brilliant and trusted minds in Conference of Champion theory – seriously, my g-chat windows are to Pac-12 thought what Cafe Trieste was to the Beatniks – we need more than perception. This is some Ginsberg, Kerouac shit.

Let me begin by saying we’re going to go ahead and agree and assume that Oregon’s front court is already not the best defensively. They’re undersized and undermanned with Mike Moser (6’8″) and Richard Amardi (6’8″) getting the lion’s share of big man tick. Size doesn’t dictate defensive prowess but sometimes being the 11th worst defensive rebounding team in the conference (and 230th worst in the nation) while combining to commit more than 11 fouls per forty minutes can support that assumption. Ben Carter was expected to have a bit more impact but he sold his shoes and so he’s just now getting to lace them back up. Let’s move on.

Here is what Oregon’s defense breaks down to: 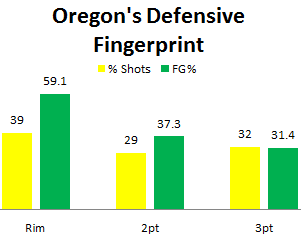 I’ll get this started with the jump shooting defenses and leave the rim stuff for later. The rim stuff is my favorite so we’ll call it dessert. The shooting D is slightly below average. The yellow indicates they allow an average amount of twos and threes as well as an average 3FG% against (158). That’s fine. Average defense masked by a superior offense can get things done. But that’s only on threes which is generally not the most exciting defense to discuss because, as KenPom explains, sometimes taking a three is like playing the lottery. Thus, three point defense becomes an interesting point of defensive philosophy. For the Ducks it seems to be a shot they’ll let opponents take a comfortable amount of, letting them gamble a little but not a lot.

So with regards to my porous perimeter theory, I’m left to see that against that very average number of two-point jumpers, teams are hitting a very un-average percentage of them. Opponents are shooting 37.3% in the two-point jumper range and that ranks 251st in ‘Murica. To me, and in an effort to support my theory, this suggests that the already undersized and undermanned front court is being confronted with the defensive challenge of stopping dribbling guards. To stop the same guys who’ve just blown past a Duck guard and who are now able to do one of two things:

Oregon is allowing 39% of shots against them to come at the rim which ranks 205th in the nation and 11th in the Pac-12. Now this doesn’t necessarily mean they do a poor job of defending the rim so we can cite their opponents’ FG% at the rim. This is 59.1%, 186th in the nation and 9th in the conference. Those powers combined – high percentage of shots at the rim and high percentage being made – and you have the perfect storm of bad defense. Penetration leads to easy jumpers or a shot at the rim.

Furthermore – and this might be the toughest part of it all – the Ducks are allowing the 226th highest free throw rate in the nation meaning – and this is a very loose description – opponents are getting to the line on about 43.1% of their possessions. This of course isn’t taking into account all of the factors that define a game’s possessions but it’s how I’ve chosen to explain FT rate in this context. It gives us an idea not a fact, chill out.

But why it further contributes to this poor Duck defense is that Oregon is playing with the 18th most possessions per game in the nation. Ipso facto, Duck opponents are getting more possessions too and if they’re getting fouled on those – or easily to the rim – then they’re going to score more points. More points = bad defense.

Defense is so difficult to quantify and it’s really tough to pinpoint a single weakness without watching all of their games, breaking down tape. I’m not going to watch all of their games. And I won’t soon tell you Oregon is a good defensive team. We’ve gone pretty extensively into a few reasons why they struggle. Areas in which they can and need to improve.

I can say that Oregon is an average defensive team. Their defensive efficiency ranks just a few tenths of a point above average (103.3 vs. 104.1) and prior to entering Pac-12 play, Oregon had played a very average schedule. Their non-conference strength of schedule ranked 211th. Average opposition + average defense + elite offense = 13-0. Note that the Ducks’ three conference losses are to 3 of the 4 highest KenPom rated teams they’ve played. It’s why the Duck SOS was on my Fourteen Things to Watch list (#5).

This isn’t a Duck death certificate. As good friend and Duck fan Matt told me, “Altman’s defense is a process, not a formula.” I love this concept and believe he’s right. There were going to be growing pains with such turnover and Altman should be applauded for what he’s done. A season ago he was coaching a top-10 defense and a season later he’s coaching a top-10 offense. He’s done both successfully. Their current slide perhaps supports the adage that defense wins championships. The Ducks, after all, did win the 2013 Pac-12 Tournament.

The best part about defense, however, is it can often be a simple test of fortitude. Sometimes you can just choose to be a better defender. With Arsalan Kazemi not soon to walk into Matt Knight, I wonder what direction these Ducks will take?

One thought on “On the Oregon Ducks’ Lack of Defense”