I can’t dive into too much hyperbole because it was just one weekend. But I’m really impressed with the Utah Utes. They’re not on the tournament bubble but they might – might – have a chance to have their name at least discussed inside the tournament war room. But not going to dive into hyperbole. OK, maybe some:

Was Utah’s 74-69 win over UCLA on Saturday the Utes’ biggest win of the Larry K tenure?

I’m not sure if that question even really means anything but looking back at his three years in SLC he’s got a few good ones under his belt. They knocked off #19 Oregon last season and eliminated Cal from last year’s Pac-12 tournament. They also held court against CU a season ago and blew BYU out this season. But this win, against a ranked UCLA squad that is…well…UCLA, comes as the greatest Krystko-win at Utah.

Firstly, it was UCLA. The school of Wooden-lore and 11 national titles and everything else that is the powder blue. As a reminder of that lore, I almost got swallowed into the 40th Anniversary of Notre Dame ending the 88 game win streak documentary, but then I realized that it was half Digger Phelps and that my mom was waiting for Pops and I at a restaurant down the street. I digress.

Utah didn’t win this game as the little team that could. It wasn’t like last year’s P12 tourney with the ninth seeded Utes battling into the third round. No, this was a 13-4 team with the belief that they can play with anyone and so they did.

I present the game’s win probability chart courtesy of KenPom: 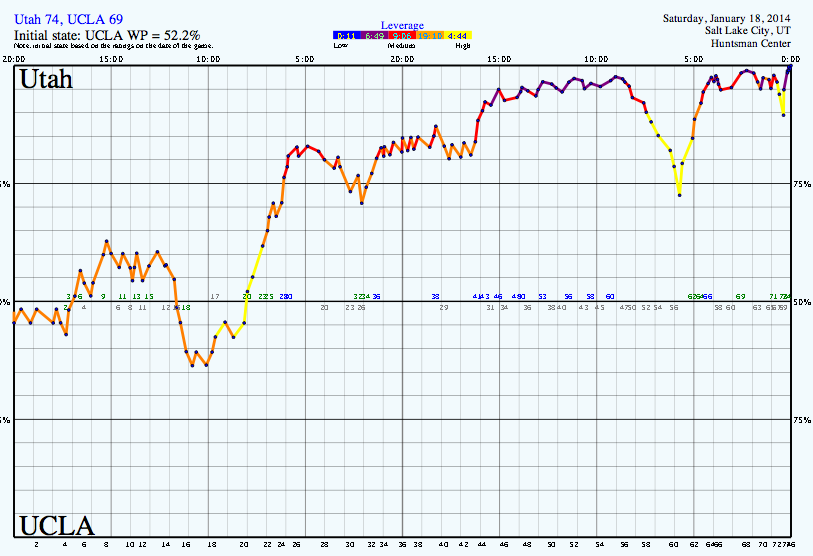 Utah was the expected victor from the first half’s 8-minute mark on. That’s 28 minutes of gameplay in which Utah was the statistical favorite. They subsequently advance their record to 14-4, further validating for themselves that they are to be taken seriously.

Like I said, I don’t see this as a tournament bound basketball team but I can’t yet rule that out. For example: They’ve jumped into KenPom’s top-50 and have contests against Colorado (x2), Arizona (x2), UCLA, and Cal remaining. Which is to say they still have opportunities to bolster that light resume. Am I pining to a possible Utah audience? Absolutely, but what is there, if not hope, amongst fans?

Saturday was a resounding victory for the Utes. The signature win of the Larry Krystkowiak era. Which is to say it wasn’t a fluke, the aforementioned chart suggests it was expected almost wire-to-wire. I’ll try to mute the hyperbole, and Hoyos Revenge will help us remember that Utah tried to give that one away, but that wasn’t just your average win. It was UCLA on the heels of a rough road trip. The Utes, as an emerging program, asserted themselves as an arriving program.

Because sometimes arriving doesn’t necessarily mean landing on the moon and planting your flag.

Sometimes it’s enough to just say that someday you can.