I have a ubiquitously discussed fascination with shots at the rim. I want to know how teams make them and how teams stop them.

A week ago, in the midst of fan euphoria with the Wildcats in the Bay, I went in on Stanford’s #TreeDunk. The silly video lauded the Cardinal as dunking all over Wildcats. I took to the numbers and found that they actually spend very little time at the rim and that’s fine.

What I neglected to address – and I had no qualms about it then – is rim defense. So this week I will.

Defenses are constructed in many ways with lots of different philosophies on how they’re going to keep you from scoring. We can look at UCLA for example. Here’s a team playing significant amounts of zone this season, packing into the lane to compensate for size and athleticism issues. They’re effectively defending by forcing teams to shoot threes. Against the Bruins, 42.3% of shots are from distance (that’s 7th most in the nation). Conversely, Sean Miller’s pack line defense is engineered to limit threes, allowing just 26.9% of shots from deep (23rd lowest in the nation).

But forget about three point defense. You can read about it here and learn a lot.

Defending the rim is interesting because it is so often associated with the blocked shot. It’s the big men blocking the shots and it’s the big men living in the paint. If such is our belief system, we’d be led to think that the Bachynski Devils are the best rim protecting team in the conference – if not nation! After all, the big Canadian leads everyone with 4.1 blocks per game and the Devils subsequently lead the conference in block percentage (a look at blocks per 2-point FG attempts). Here’s how that breaks down for the Pac:

Indeed, with Bachynski swatting shots away, the Devils have the highest rate in the conference. Walking our way further down the list we find that the conference’s second leading shot blocker, Omar Oraby, anchors the eighth best shot blocking team (by percentage). But as these are both big men, we can examine things a little closer to the home of this discussion. The percentage of shots at the rim a given team is blocking:

Perhaps not-surprisingly, this chart demonstrates that some of the more front court adept teams do a better job of blocking shots at the rim. This makes sense as Washington is devoid a significant post presence whereas teams like ASU, OSU, and USC have some significant size down low (you realize Omar Oraby is 7’2″). This further suggests that perhaps Washington’s rim defense is not predicated on shot blocking (though to say anything of Washington’s defense this season is a leap). Size doesn’t necessarily matter when it comes to shot blocking, but it can’t hurt.

Of course noting one stat of a single talent (Bachynski, Oraby) won’t tell us much about the whole. Neither does the lone stat. To note that ASU and Utah sit atop the conference in block percentages is really just to say…well…that they lead the conference in that stat. What if teams were making every other shot? You block a few but they make the rest? I suppose we could look at that too then, couldn’t we. An examination of each Pac-12 team’s defensive field goal percentage at the rim:

Leading the way here is USC. The same team we previously saw sitting in eighth place in block percentage and third in block percentage at the rim. Meanwhile, Colorado is in second with just the seventh best block percentage overall and at the rim. Next is Cal who ranked sixth in both block percentages and, in some regard, we’re starting to see an inverse relationship. I don’t believe this to be statistically relevant but I do think that this is an indicator that just because you’re blocking shots, doesn’t mean people aren’t making other attempts. Our presumed block leaders, ASU and Utah, are in the middle of the pack, yielding pretty average FG percentages.

Washington sits at the bottom of both lists and I’m willing to leave that discussion there. The interesting fact here is that Arizona – they of the nation’s top defense – allow teams to shoot a gaudy 65.6% at the rim (316th nationally). The average team shoots 60.9%. It would seem the Wildcats are amongst the worst rim defenders in the country.

Because what if Arizona just didn’t let teams take shots at the rim? Thus far we’ve noted teams that dismiss shots around the rim (presumably) and teams that affect missing at the rim (dFG%), but what about limiting shot attempts? As we noted earlier re: three-point shooting, teams can be constructed to limit a certain shot. With regards to the close parameter shots, this might be a good strategy. Shall we gander at the teams limiting these chances? We shall:

HOLY PACK LINE DEFENSE the Wildcats don’t let anyone get near the iron! That percentage leads the nation and handily leads the conference. But with regards to whether or not they defend the rim well, can we simply anoint them the Sworn Brother’s of the Rim’s Watch? Probably, but I’m not entirely satisfied. What do we know about Stanford’s rim protection – the team I dogged for not taking shots at the rim and who led this article? They allow 32% of shots up close while the average team is taking 38.3%. Not too shabby while also ranking fourth in dFG% at the rim. Meanwhile, Colorado ranks near the bottom of the twelve at 36.7% of shots at the rim, flirting with average. However, they nearly lead the conference in dFG% against. Are you seeing a pattern? I’m not.

Once again, however, not so fast my friend!  I have one final chart for us (and then I’ll show one more). The above offers gross data and if I’m being completely honest I think I just wanted you to see all of it. The factor we’re not accounting for is defense. Teams play at different paces, putting up more or less shots and subsequently their opponents doing similarly. USC, for example, appears to have the resume of a good rim defending team when looking at % shots allowed and dFG%. But they’re also the third fastest team in the conference behind UCLA and Oregon and are subsequently yielding 12 dunks or layups a night – third most in the conference. So let’s divide the above columns 2 and 3 to get our rim defense rankings: 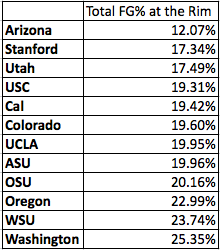 By finding the ratio of rim makes to total field goal attempts on defense, I believe we’re looking at the defense as a collective. After all, the goal of a defense is to prevent the other team from scoring and the other team scores by taking shots. That’s what is represented in the denominator. The numerator in this case (field goals made at the rim) represents the number of easy buckets yielded. In short: As a fraction of total defense, how much are you giving up at the game’s easiest success point?

If you’re Washington, it means that one quarter of all shots taken against you are worth two points from very close to the rim. That’s not good. Conversely, Arizona allows just 12.07% of the shots against them to be successfully laid or dunked in. I wish I had national context to these numbers but I don’t have the bandwidth right now. If you want more, email me and we can talk.

In bringing things full circle, Jordan Bachynski is going to set both the school and conference blocked shot records. He is a factor in protecting the rim as are all great shot blockers. That’s an important and helpful asset to the game. But like everything else, there is no Bachynski in team. Its appears the defensive collective – if not strategy – can often protect the hallowed area. Of course with this information, we can further our understanding of a team’s defensive strategy which would take a team by team analysis. But that’s for another post so just know that Oregon severely misses Arsalan Kazemi and Tony Woods.

But one final chart. This time with no numbers, just color coordination so we can see how all of this adds up across the factors we examined and the mishmash of strategies used to protect (or otherwise) the rim:

NOTE: All data and stats for this piece were obtained from Kenpom.com, hoop-math.com, and basketball-reference.com.