1) Injuries f***ing suck – Jernard Jarreau, Aaron Bright, Spencer Dinwiddie, and Brandon Ashley. If I’m missing others I apologize but when the court is taken devoid these characters it sucks. The Dawgs miss JJ’s size as he projected to help their thin front court that’s become the Perris Blackwell show (I think Rain Man Jr. just got called for a foul). While Aaron Bright is missing out on creating something profoundly special with the same six guys he signed to play college with four years ago. That 2010 six-man class of Dawkins’ has been through quite a bit and it sucks Aaron Bright won’t be a part of their last hoorah. Schools, let alone Colorado, don’t often come across dynamic, 6’5″ point guards capable of taking a game over on either side of the ball. Spencer Dinwiddie was the centerpiece of a tour d’buff, sweeping the nation and conference by storm. And Brandon? Let’s just say I’m going to miss seeing him each night with that team. Injuries f***ing suck. Get well soon, gentlemen.

2) Transfers kinda work – Jermaine Marshall is raining Jahishalls in Tempe. The transfer from Penn State is scoring 15.3ppg and hitting 48% of his threes – 91.2% of which are assisted (presumably by Jahii Carson). Just south, in Tucson, TJ McConnell is being called the most important piece of the #2 team in the country. In ski country, Delon Wright is quickly becoming recognized as one of the best players in the conference. He’s a guard taking 60% of his shots at the rim and making 75% of them. That’s nuts. His line reads like this: 16/7/5. And then there’s Transfer U. Individually, each of Oregon’s transfers (Moser, Young, Calliste, Amardi) are having fine seasons. But as a collective (along with the rest of the Ducks) things have been…better? Since entering the calendar year, Dana’s team is 3-6 and barely looked that good. This past weekend, Dana defended his use of transfers (ironic word choice!). Basketball is indeed a team sport and with such there are strong components of unity and other teamly terms. Oregon has some great talent, but does that make a great team? Nine more games.

3) If you want to play fast you still can go to UCLA – By now we’re all familiar with Andy Enfield’s line from earlier this year lauding his lolly-gagging Trojans to “go to UCLA if you want to play slow.” Well now, halfway through conference play and twenty-plus games into the season, here are the many ways UCLA is outpacing USC:

The Battle of Los Angeles reignites Saturday in the Galen Center. Put your seatbelt on.

4) Parity? Mediocrity? No, it’s gotta be parity – We began the first weeks of Pac-12 play and had four teams ranked in the top-25. Sure, not at once, but between two separate poll releases, each of Arizona, Oregon, Colorado, and UCLA were ranked. This is far from the end-all-be-all barometer, but just a few weeks removed, Oregon is in ninth place, UCLA holds a loss to Oregon State, and Colorado is still learning it’s way through the post-Dinwiddie era. Even Arizona just lost Brandon Ashley. Further, the third place Cal Bears hold a win over Arizona (KenPom #1) and a loss to USC (KenPom #130). The results are unexpected and the games great. Amongst conferences, the Pac-12 ranks as having the 4th fewest blowout losses. I think that’s something to cheer?

5) (non) Shooting guards – With all these guards you might suspect they’d be taking a bunch of threes. After all, this is college basketball, it’s a high value shot, and guards love to shoot. Not the case. As a conference, the Pac-12 ranks 32nd of 33 in the percentage of threes they take. Just 29.1% of Pac-12 shots are taken from distance. That’s a conference with guys like CJ Wilcox, Chasson Randle, Roberto Nelson, Jordan Adams, and Jahii Carson. The average percentage of shots from downtown is 32.3%. When Pac teams are shooting from distance, they’re doing a decent job of making them, too. Their collective 35.2% 3FG% ranks 15th amongst conferences. The average 3FG% is 34.3%. It’s something of a most interesting man situation: We don’t often shoot threes, but when we do, we make a slightly above average amount of them. But what I find really odd is that while it would seem there is a concerted effort to not shoot threes, the Pac ranks 26th amongst the 33 conferences in 2pt FG%. WTF, guys? You’re passing on threes to miss twos? There’s no doubt something to be said about defense in here but as far as observations go, this was interesting.

6) But wait…there’s more – Those guards are really good. Thirteen of the top 15 scorers in the conference are guards. Fifteen of the top-25 ORtgs in the Pac-12 are guards. Furthermore, the All-Conference team is likely to not include a few of these guys: Roberto Nelson, TJ McConnell, Nigel Williams-Goss, Chasson Randle, Justin Cobbs, CJ Wilcox, Askia Booker, or Delon Wright. Hell, even Jordan Adams could get squeezed by his own teammate, Kyle Anderson (serious POY candidate).

7) Tweet! Whistle! Tweettweet! – The first thing addressed at Pac-12 media day was college basketball’s new rules. That we’d hear more whistles and see more free throws. It was a concerted effort to make the following chart look the way that it does: 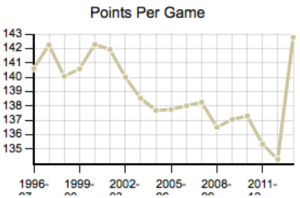 See that progressive, 18-year downward trend in scoring? The NCAA wanted to do away with it and it appears they have. Here’s how it’s looking in the Pac-12:

8) Defense Travels – This title is a little misleading because the Pac-12 is one of the worst road conferences out there. Optimistically said, it appears Pac-12 teams enjoy the greatest home court advantage because they’re winning 68.5% of those games. Now defense leads this observation point because if we look down two lists – the conference rankings by record and by defensive efficiency – we find:

On this list, only Oregon State and Utah differ by one ranking or less. My takeaway? Defense is pretty telling. And here’s what to make of Oregon State being in three spots ahead of their defensive efficiency and Utah five spots below. OSU: has played just four road games and one of those included Washington State. They’ve essentially pulled a “Ducks” and have managed to ride first half’s most efficient offense (108.7) to their 5-4 mark. Utah: now ranks as the 350th luckiest team in the nation. That’s the 2nd most unlucky squad and basically means they exceed expectations but not enough to get a win. I keep citing this for the Utes and what it’s ultimately going to explain is a TOP-4 FINISH IN-CONFERENCE NEXT SEASON. Boom you heard it hear first. Shall I say it again? Utah will finish amongst the top-4 teams in the 2014-15 Pac-12 and return to the NCAA tournament. But for now they’re in tenth place.

9) Nine – That’s how many games to this…and embedding this video marks the triumphant return of Husky Cheerleader Hair Toss (absolutely no pun) to the blog. Welcome back!