I’d written everything below and was leaving this lead for last. I edited the below (moderately) and still didn’t know what to lead in with and then ice dancing delivered gold:

Leader in the Clubhouse: Teams that shoot 16-30 from the line won’t get mentioned as clubhouse leaders. Later in this segment I will contradict that statement but as I’ve written led every Leader in the Clubhouse section with Arizona speak,  allow me to quote my brother in reference to the Wildcats post-Ashley:

Gold. And here’s where I contradict myself and tell you that Arizona State is our clubhouse leader. They beat the aforementioned Wildcats despite their own 15-26 free throw misery. But as both teams struggled from the stripe, it was ASU who gained the win (hardly anyone earned anything in that game). I thought the game was going to boil down to the post play. Kaleb Tarczewski had done a fantastic job keeping Jordan Bachynski from doing anything in three previous match ups. On Valentines, the big Canadian had the game winning disruption as part of his 13 point, 7 board, and 8 block performance. It was his best game against Arizona and only win against Tarc. Also, the Sun Devils did a terrific job of Jermaine Marshalling. Alas, Herb got his signature win, a shower, and to experience a new feeling:

Additionally, now that I’ve given a rare amount of love to the Tempe school, I’d like to note that California garnered a road sweep, Utah won their first road game, and UCLA is back in the top 25.

Biggest Loser: Really difficult to pin anyone to this. I think Stanford sustained the worst or perhaps most damning loss of the weekend as they stood a great chance at beating Washington before not beating Washington. The loss drops them into sixth place which really isn’t all that bad but they were really close to not having to be in sixth place. Beyond that, I’m not soon to pile on USC’s season as it was pretty well known they’d be struggling this year. So, sorry, Cardinal.

What We Learned: Just a short while ago I was ripping this conference. I was quick to get lost in the odd goings on that swept us in the league’s first few weeks particularly with my (our?) high expectations. I mean, look at this: 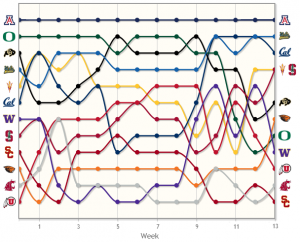 But things are starting to settle out. We’ve seen back-to-back weeks with pretty unshocking results. So what did we learn? Well Jermaine Marshall is tough and can fill the tin. Did we just learn this? A little. But we already knew the guy could score since before he arrived in Tempe. We learned that Utah could win on the road. But we already knew that they were good enough to do it and that USC is really bad. We learned that Stanford continues to struggle in close conference games. But we already knew that as last season they were 2-8 in conference games decided by fewer than 10 points and Johnny Dawkins is just thinking about this season differently. So again, I ask whether we learned anything this weekend? Not really. But sometimes knowing exactly who you are is learning enough.

In Defense Of: The referees. I’ll be honest that I avoided a lot of post-Valentines analysis. I didn’t want to hear an unmutable drone about what the stripes may or may not have missed. And sure, they very well may have botched the close of that game. But there were far too many other components of the basketball contest to harp on the efforts of three gentlemen in a court stormed chaos. That’s result based analysis and I think we can all be better than that. I’m not soon to necessarily defend the stripes, but they can’t be the conversation’s centerpiece. They never should be unless they’re being offered money and trips. Arizona State out uglied the Wildcats on that night. Happy birthday, Arizona. Next game.

The YouTuber: Not linking to a delightfully hilarious or poignant video this week. If you’re from Tucson or went to school there, then you know Eegee’s. It’s a local, caloric legend, namely for the frozen slushees that can spell any hot summer afternoon. My dear friend Lauren has submitted a t-shirt design and NEEDS YOUR VOTES. You’ll have to ‘like’ the Facebook page but you’ll also get to know that Lauren has won Eegee’s for a year. She’s ensured me she’s immune to brain freezes.