It wouldn’t be the preeminent Pac-12 basketball blog if we didn’t get a chance to examine every post season team’s fortunes. Here we get two NIT previews and a CBI preview that digresses into commentary on Andy Enfield.

The not in tournaments:

Opening Remarks: I was inside a raucous Haas Pavilion as Justin Cobbs drifted into the left corner, towards the baseline and Kaleb Tarczewski rolled with him. Cobbs elevated, the seven-footer elevated, and the shot was purely released. Cobbs wound up a heap on the ground, the fans wound up a mess on the court, and the Bears wound up in the NIT. That’s not how the story was supposed to end but that’s how it did. The inconsistencies caught up with them and they closed the season losing eight of their final twelve. That’s not a dancing tune and this is a frustrating NIT bid. In 2012 I watched as Kyle Fogg – an Arizona senior I saw grow, develop, and grind into an first-teamer – accepted a bid into the NIT. He handled it by scoring just 5 points on 2-5 shooting inside the McKale Center. He lost, his final game as a Wildcat, to Bucknell. In Tucson. The point here is that Justin Cobbs and Richard Solomon have tasted sweet tournament success. They danced each of the past two years and are just a year removed from giving Syracuse all they could handle. And now they’ve drawn a home game against Utah Valley, KenPom’s 198th best team, on the same floor that they beat an undefeated and #1 ranked Arizona team. It’s a different stage.

So yeah, that happened. They also don’t shoot the ball and are going to make an effort to score inside the arc with the 333rd slowest offense in the nation. This offense is actually pretty impressive considering they take such a deliberate amount of time and conjure the 13th best A/FG ratio in the country. This suggests that their patience pays off. But not that much. They’re still the 209th most efficient offense. Cal should roll and throw zero basketballs at anyone in doing such.

Stories: The NIT committee doesn’t have the same undisclosed and denied sense of drama that the NCAA committee has. I mean, what do you want me to tell you? There was some sort of sick conservatism joke being played on Cal within their quad? They play a school from Utah with a potential second round game against Arkansas or Indiana State? I don’t suspect that to be the case but I also don’t see the Bears staying very long in this tournament. That’s not an indictment on their talents, but rather a recognition that they’ve already the filet, they don’t want the chuck.

Opening Remarks: Whereas an NIT invite was a let down for Cal, Utah has been on a different trajectory. No one has asked Utah to do anything except join the Pac-12 since 2009. Pardon, they went to the Sun Bowl, but I think we’re walking in stride here. It hasn’t been the sexiest three seasons in the Conference of Champs for the Utes. So garnering this invite was a big deal no matter how illegal what Arizona did to them is in Utah. Now, did I think they’d be a higher seed? Yes. Did I think they’d get to host a game? Yes. Neither is happening for the Utes. But sometimes, when you haven’t really demonstrated a track record of success (in recent history! I know all about Utah as the 11th winningest program) you don’t get treated preferentially. So, they’ll travel to win this thing.

First Opponent: Utah will return to the Bay Area to face the St. Mary’s Gaels. The first thing I want to note is that the last time they traveled to the Bay (2 weeks ago) they beat Cal for their second road win (big accomplishment) and gave everything they had for 39 minutes and 30 seconds to Stanford. Mal-execution cost them the Bay sweep but the overarching sentiment here is that the Utes set a precedence for A) Winning on the road which they had not done all season, and B) Winning in the Bay area. Moraga, CA is just 13 miles from Berkeley. This is familiar territory for the Utes particularly considering they’re basically playing a slightly better version of Washington State: slow as a turtle, threes like preschool. Of course WSU beat Utah which is seemingly inexcusable and perhaps an aberration. That weekend sweep in Washington were the Utah’s only losses to non-tournament teams. Enough revisionism. You knew I wasn’t going to get through a Utah bit without mentioning shots at the rim, right? St. Mary’s allows the 214th highest percentage of shots at the rim (38.8%). Hello, Delon.

Stories: The tale here is that Utah is in the post-season. Here is a program trajectory graph I created used highly advance statistical models to understand what Larry Krystkowiak is trying to do: 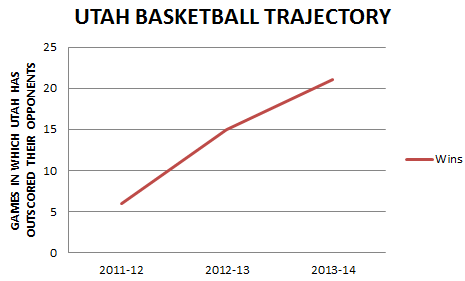 Opening Remarks: The Beavers are going to pay $35k to host their first round game. Is this basically the plot premise of Her? This is their fourth time in the CBI. They won it in 2009 and lost in the semifinals to Washington State in 2011. All of these stats I had to look up because I really don’t know anything about the CBI and it will probably remain that way. I’ll peripherally keep an eye on the Beavs but this could be the extent of it. My eyes are on North Texas.

First Opponent: This tournament puts a new spin on the phrase “cost of winning” as advancing means OSU will pay $50k to host the quarters; $75k to host the semis. Whatever the case, the Beavers have drawn Radford who has the 329th best defense in the nation. Oregon State has the 49th best offense. Plus, it’s Radford and what I really want to do is mix in a Tim Floyd wakes up in El Paso reference because UTEP is in the CBI and USC isn’t. But Andy Enfield is still waking up in Los Angeles and so is Isaac Hamilton (albeit UCLA not USC).