Between Roberto Nelson and CJ Wilcox, these tremendous seniors have weathered the worst Pac-12 storm we’ve ever seen. And that’s on a coast that rarely experiences bad storms. Across their four years, they’ve been a part of some awful conference play. Yet here they are now, on the cusp of being two of the best players in a conference possibly sending 7 teams into the Dance.

And do you realize that neither of these two would make a normal first team all-conference team? Normal would suggest a five-man squad which the Pac-12 doesn’t do so they’ve got a Pac-12 chance at first team. But these guys aren’t even top-5! Sure, neither plays on a particularly dangerous squad so they fly under the radar, ignored pretty regularly despite terrific individual numbers. I get that wins are the most important stat; but that doesn’t mean we can’t appreciate an individual’s efforts to try to win.

I was really excited to see these near identical outputs. The two best players on these two average teams. I mean, even their teams are nearly identical. Washington is 16-13, 8-8 and Oregon State is 15-13, 7-9. I even took a gander at their win shares: Nelson 3.7, Wilcox 4.0. Right on down the line they seem to be pretty similar. Wilcox is 6’5″ 195lbs. Nelson is 6’4″ 198lbs. Same size, same numbers, the big picture suggests they affect the game similarly.

But going a level deeper, we find our divergence. 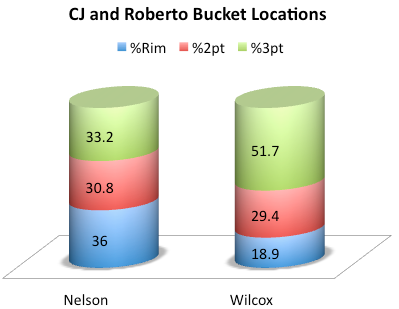 Simply put, Roberto gets to the rim and CJ prefers not to. If you were paying attention to the chart above, you’d have noticed they were making nearly the identical number of FGs per game (6.2 Wilcox, 6.1 Nelson). Yet, per our graph above, Nelson is taking 18.5% more two-point shots than Wilcox. How are they putting up the same number of points. If you guessed free throws, you were right. Nelson’s free throw rate is double that of Wilcox’s (56.7% vs 26.3%). And so it makes sense.

Like our Delon Wright study, Nelson is the slashing creating type. He differs from Wright in that he connects on 40% of his threes (Wright’s an atrocious 25.6%). But ultimately the two of them, as noted, are slashing and creating. Nelson’s possessions result in a play at the rim more than 40% of the time. It’s inside the paint that Nelson fights to 20.6ppg with just a sparse percentage of his shots being assisted. A little more than a third of Nelson’s shots at the rim are assisted. With Wright as our barometer, Nelson gets a slight more help from his friends. Wright has 29.4% of his rim shots assisted. For continuity’s sake, Wilcox is assisted on 45.3% of his rim buckets. These numbers suggest some self-reliance on the part of Nelson and Wright, the ability to create for oneself.

Nelson needs the ball in his hands to affect the game. Now obviously so too does CJ, but he ranks just 19th in the conference in usage, the lowest such percentage amongst the conference’s top-10 leading scorers (Wilcox is fifth). He’s a beautifully pure shooter. I’m inclined to note how often CJ’s threes are assisted but it’s actually below the D-1 average (75.3% vs 84.9%). Not exactly fulfilling our CJ-is-team-reliant narritive. But as such a great shooter (career 39.2% shooter as compared to JJ Redick’s 40.2% or Salim Stoudamire’s 45.8% – wait, Salim was that much better than JJ, sigh…)  it’s understandable that Wilcox is going to get the green light a little more often than not. Particularly as a senior with two underclassmen guards feeding him. Year-over-year, Wilcox’s percentage of assisted threes has decreased (I see you Abdul).

Ultimately, what each of these players is accomplishing is individually impressive and unique. They’ve arrived at similar destinations taking very different paths.

Neither of these seniors will win the Player of the Year award. But each has been a terrific Pac-12 basketball player, contributing to the resurgence of a conference once mired below mediocrity. It was the laughing stock of college basketball.

Today, while neither of their teams has seen great success, they’ve developed into two of the most dynamic and unique players in the conference. A part of arguably the best guard corps in the nation.

And they are seniors at the ends of their respective paths. I enjoyed watching them and I imagine you did, too. They did great. Good luck.