There was an element of awkwardness to the PacHoops Bracket challenge. I had offered up some incredible prizes without the promise of a single one. I couldn’t decide what I wanted to give or what the winner would have earned. But then, as the games unfolded and results fell in, it became clear that I was going to win. Awkward.

SEE ALL OF THE RESULTS

Granted, as the preeminent Pac-12 blogger, it was totally obvious that I pick UConn into the Elite Eight. I mean, anyone with half a blog can see that an eight-loss team with a recent 33-point loss would win a handful of tournament games. The writing was on the wall, clearly. They’d go on to win two games beyond where I had them losing but it didn’t hurt my bracket to pick up those 7-seed points. In beating Florida, the Huskies secured my victory in this Bracket Challenge. Sorry I’m not sorry, Derek the RA.

And before you get any further – if you even got this far amidst my bracket arrogance – don’t even come at me with “you rigged it!” nonsense. I posted my bracket for all to see. Here it is again: 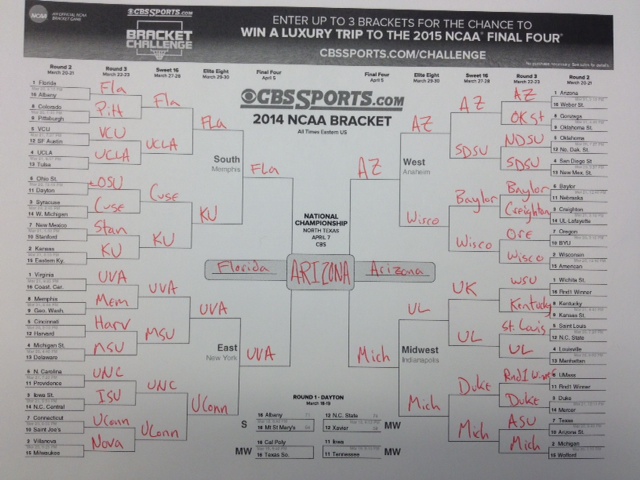 But the real beauty lies in the fact that 32 of you submitted brackets. That 22 of you picked Arizona (my new best friends) and one of you picked Colorado (hell yeah I like that pick). There were two bids for Sparty (and who doesn’t love Izzo?), one for Bucky (they may have beat my Cats but I liked that team and the shot of Traevon Jackson  on the bench after losing to the wrong Cats nearly broke me all over again), and a handful of Gator picks.

The Bracket Challenge worked, we found The One (me), but that’s really not telling of anything at all. Let’s get serious. Next year I’ll finish last or something.