Should we make the tinkle jokes now or later? I’m opting for later because I have to pick and choose my moments to act like an adult and right now shall be one of them. Mom, I hope you’re reading. I also think such humor is better suited for well timed tweets during tense game situations.

Alas, let’s welcome Mr. Coach Wayne Tinkle to the Conference of Champions. While he inherits what could amount to the worst Pac-12 team since – well since really not that long ago when Utah and USC were 6-win teams in 2012 – he can, however, take solace in the fact that he will now be the conference’s tallest coach! Tinkle stands 6-feet-10-inches tall and looks to be the Shaquille to Krystkowiak’s Divac. That said, K crushes bike and phone thieves and Tinkle: 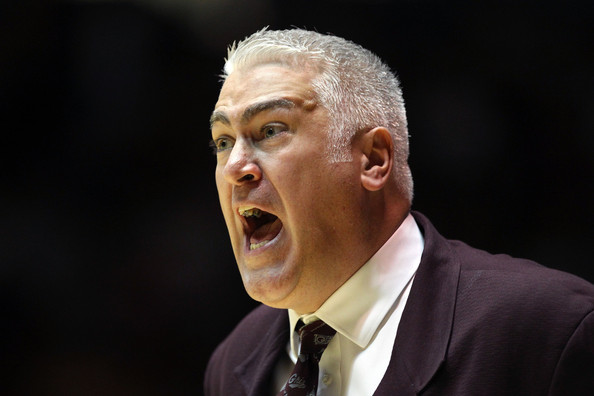 So aside from from gravity defiance, what does Tinkle bring westward? He’s the third man (by my calculations, I could be wrong) to leave the Grizzlies for the Pac. No doubt he aspires to match the success of Mike Montgomery (281 conference wins), but let’s focus on what Tinkly has already done. He’s coached just one team to a losing record and played on CBS in March three times. That’s three more times than Oregon State in the past 24 years. Tinkle can Dance.

Of course a new hire begs the question whether or not he can dance in his new colors. It would seem he won’t be doing such for awhile but he has an auspicious start considering his son is considered a high major talent, a three-star forward named Tres Trinkle who will follow pops to Corvallis. Now let’s run that back real quick: big dad, coaching big son who’s name is Tres. If that doesn’t sound like the trailer to the sequel to The McDermotts: A Jump Shot Story then you’re not paying attention.

Disney just contacted me for a script (I declined after declining to watch Million Dollar Arm).

All in all, this is a good hire. Considering the timing of it all (weird) and the support around this program (minimal as 2014 saw Gill’s worst attendance numbers in years) getting a proven coach is good work. And work is what Tinkle will have to do to have any semblance of success in what amounts to the most success deprived basketball program in the conference.

Is it a good day to be a Beaver? Maybe. But it’s always cool to fly private:

Wheels up to Corvallis! So excited for the new adventure! Let’s Go!! #GoBeavs pic.twitter.com/KI12XmAKtw

When I tiredly opened the Twitter app on my phone while awaiting a train that was seven minutes away, the first news I saw was that Craig Robinson had been let go. It took a second to process, such are Monday mornings, but as that sunk in, all I could think was, “Now what?”

Bob De Carolis oozed confidence just a handful of weeks ago in noting that his coach would return. He listed everything Craig had accomplished that the previous five coaches following Ralph Miller had not pulled off. Now many of these accomplishments are meek (Oregon State had four wins against top-50 and six against top-100 NCAA basketball programs this past season, including wins over two teams that advanced to the Sweet 16), and none included an NCAA tournament visit. But Robinson had bested them all. Oregon State’s best coach in more than twenty years. And now he now joins them as a former Beaver.

While “now what” was my first thought, reactions to the news were the immediate response. To address:

1) Why is Craig Robinson being fired?

Aside from the aforementioned vote of confidence from his boss (you paying attention to this possible future candidates?) we can rationalize why Robinson was fired as the trajectory of his program was less than promising. He was about to lead a team that had very little talent. Everyone of note was leaving and the program’s win totals over his six years reads like this: 18, 14, 10, 21! 14, 16. The Beavers were going to be very bad in 2014-15, competing with that 2011 ten-win squad as worst Robinson team in Corvallis. This is an unfortunate scenario for a seventh year coach. The why fire him question is kind of easy to answer despite some of his semi-unprecedented success in Corvallis.

The quick answers here suggest money was in play. Robinson was owed $4M and will make that $4M whether or not he coaches in Corvallis. Someone with lots of money perhaps wanted Robinson out and made it a possibility for the athletic program to oust the First Coach. They accomplished this either by subsidizing the buyout or threatening to subsidize nothing. Money talks and this maybe wasn’t a possibility when schools normally fire their under-performing coach in – say – March. Because it’s May now and so….

It’s May, every coaching gig has been inquired about, filled or rejected, recruiting is picking up, and everyone is leaving Eugene. You’re offering a job that most closely resembles a rusted ’93 Taurus that also needs a new transmission. And brakes. And a rear window. And probably three new wheels. Gone are the Beavers’ five leading contributors and they might only have a mitten to cover it up (that’s a joke noting that Gary Payton’s son – Gary “The Mitten” Payton II – will be starting at OSU this fall). From Drew:

Wow that Oregon State program is a mess right now. Why would someone want to coach there? Cupboards not just empty, cupboards missing.

The cupboard is bare, it’s non-existent and there isn’t even an appointment with the carpenter to build a new one. But taking over a talented roster is something only Steve Alford, Tubby Smith, and Bill Self got to do (sure there are others but that’s this moment’s #HotSportsTake). In moving coaching jobs, it’s not exactly a pre-requisite. A foundation for success, however, that’s a different story. Craig Robinson was sub-.500 and is the best coach the school’s had since they employed the second best Miller the conference has ever seen [winky face emoji]. In summary: they’re offering a bad role to a thin market.

The reactionary phase is satiated but we’re now back to my initial reaction: Now what?

Well Bob De Carolis lied to us in his press conference noting that he had “no candidates in mind.” Puh-lease. The third point above alludes completely and totally to the idea that there is someone lined up. At least that’s what I want to believe. And if there isn’t paperwork on someone’s desk that would make them the next coach inside Gill, then I have to ask, “BUT SERIOUSLY WHY NOW?” To not have a solid candidate lined up when working this far outside the realm of normal hiring cycles suggests ineptitude within an athletic department that seems to be pretty adept (solid football program, a top ranked baseball team, Women’s hoops danced, 2012-13 gymnastics conference champs).

The timing of this would seem to be an opportunity for De Carolis to either look brilliant or otherwise. 1) Awkwardly fire your coach to bring in [insert sexy hire here which could turn out to be Ben Howland which would be a monster hire at a school like OSU and might also demonstrate just how tarnished the Howland brand is in the wake of his departure from UCLA but we can probably dedicate an entire post to just that and cut out this run on sentence]. Or, 2) awkwardly fire your coach to bring in an elongated coaching hunt, an underwhelming name, and probably some serious heat.

The future of OSU basketball weighs in the De Carolis balances of decision making. And while part of that future is already written – the Beavs are going to suck next year – it’s the AD’s job to think big picture.

What is Bob De Carolis thinking?

Personal Note: I’m bummed to see Craig Robinson leave the conference. I defended his position when he was first retained because I thought he was, if nothing else, OSU’s best option. That’s the basketball side and while I don’t have particularly close access to these personalities, in my few opportunities, Robinson was a charming, thoughtful, funny guy. At Pac-12 Media Day I asked him about how his defense had improved by prefacing it with a comment on Barrack. He laughed, answered, and then coached the conference’s worst defense. But you laugh at my jokes and I think you’re good people. Good luck, Craig. You’ll probably do just fine.