You’ll notice I’m flipping our normal format. Usually this space would be reserved for LOVE but I needed to note the hate, first. It feeds the love. As Tad noted, the jump-start on this season occurred with Dinwiddie’s injury. We saw this team play and they went 9-10 and heartlessly lost to Pitt by 29. They return 91% of the minutes that did that. The same minutes that produced a 96 ORrtg (comparable to Prairie View A&M) and a 104 DRtg (comparable to Monmouth). Try that math on. It doesn’t really add up to wins. I hate to harp on that but if we’re talking tipping points, I think I’m onto something. The program has always got to be bigger than any one individual. I understand losing a key contributor mid-season vs. post-season are very different circumstances. That last season’s jump-start allowed folks to know their roles in what was ultimately going to be a Spencer-less 2015 season. But if we’re looking for a means to viably predict what Colorado is going to do, we have some semblance of a sample set. And it doesn’t look good.

Timing. So much of life is about timing – I hate it as an excuse – but the reality is that being in the right place at the right time helps. It’s almost the entire premise of another Gladwell book, The Outliers. When the Buffs joined the Pac-12 they bought in at the lowest price. 2012 was a miserable season but it gave CU the opportunity to see itself in a winning light. And they’ve run with that, building confidence to the tune of three straight tournament appearances. And then, in what was to be and was becoming their best season, they instead got a jump-start on this season. What I love about this program is that they’ve capitalized on the opportunities at hand. Welcome to the Pac-12, we’ll take the inaugural tournament crown and make the next two NCAAs. If we’ve learned anything about Colorado basketball, we know they’re opportunistic. So, statistics aside, why shouldn’t we think that Tad and crew didn’t take advantage of their jump-start? Undoubtedly they’re faced with a great challenge, but that challenge is going to be faced by freshmen turning sophomores. That’s when players typically make their biggest jump in output. They have a core of veterans and are led by a senior guard. There’s plenty to like here and, if nothing else, this group has been through the fire. Furthermore, the Buffs, once again, find themselves with great timing: This just isn’t that great of a Pac-12 season.

Bonus Love: Josh Scott and Askia Booker. I can’t just love the story of the Buffs, there has to be something more tangible to it all. So with reports that Scott has bulked and Booker has recommitted himself to getting to the rim, I like what I’m hearing. Booker will once again be a polarizing character but he’s also a senior guard. Ever heard me note that I love senior guards? I do. Scott already was one of the top players in the country at getting himself to the free throw line (80th nationally in FTrate). With added size and strength, expect to see either a maintained FTrate or, simply, an increased scoring output. Additionally, I love local recruiting. Dom Collier picked the hometown Buffs. He will be a key part of not only helping the 2014-15 Buffaloes, but also a big part of the programs direction. 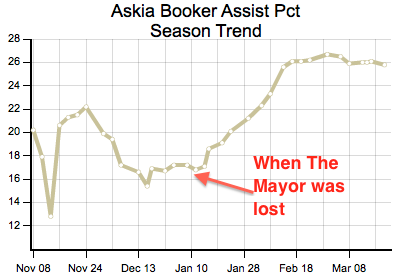 The Buffs needed a point guard and Booker became the point guard. I love this. Sure we’ve covered at length that the team wasn’t as good post-Spencer Dinwiddie. But Booker was willing to do what the team needed. This year they’re going to need a little bit of everything from him. It’s my guess he’s up to the challenge.

Booker is a committed playmaker and puts up career bests in any and everything efficient. No matter how great a year he has, there’s going to be moments he frustrates. But he curbs that and gets the ball, more often than not, into his sturdy big, Josh Scott. He does the Jelly thing while Xavier Johnson demonstrates more discipline and shot selection than previously alluded to. He runs his moth less and his motor more. Dom Collier proves to be the sturdy hand they needed and the sophomores, Jaron Hopkins and Tre’Shaun Fletcher, incrementally improve and, for the fourth straight season, Colorado dances. The program tips the direction of winning.

All this talk of jump-starts has Askia Booker feeling the pressure to be a playmaker. He becomes a maker, alright, taking all of the shots that should be going to Josh Scott. He falls in love with a mid-range game that is not existent and leaves the Buffs in a lurch: incapable of rebounding his quick shots, unable to slow the countering transition attack. Scott’s going to get his; he’s the most adept offensive big in the conference. But it’s never going to be enough with Booker and Johnson’s shot selection (note, this is our rock bottom section). Hopkins I believe will improve but it’s seemingly all for naught. He’s just not getting the touches he needs or deserves. It’s a Boyle team so the defense should be there; the issue becomes the offensive single-mindedness. They finish, once again, in the 200+ range of assist rate and without an NCAA invitation.