In 2012, Ben Howland landed the best recruiting class in the nation. His program had been floundering but that year he amassed what appeared to be his most talented Westwood team in awhile. One of the concerns, however, was that this team wouldn’t have the  traditional Howland characteristics of toughness and defense. These traits have been both quantified and qualified but as a reminder, up until 2012, Howland teams were averaging a 65.8 adjusted tempo (this includes two Pitt seasons) and relentless defense. Until 2012 – and excluding the 2005 anomaly of a 70 AdjT – Howland rarely wavered off of that pace. The variance across tempos, again excluding the 2007 anomaly, was just 1.43. Variance, as a reminder, is a calculation of how far a set of numbers is spread out. It allows us to recognize how fickle a quantified act can be. A smaller number suggests a pretty consistent set of data. A bigger number, conversely, alerts us to a dataset with a great amount of fluctuation.

Howland’s 2012 Bruins would play to a 69.2 adjusted tempo, 5% greater than his average career tempo (including 2005). He significantly deviated from how he’d previously been successful. Three days after the season ended, Ben Howland was fired.

Why Look at This?

I understand that there are a lot of factors that come into a firing. The 2012 Bruins actually won the conference title. They earned a six-seed in the NCAA tournament. Howland was fired nevertheless. While that maybe isn’t directly correlated to adjusted tempo, it would seem that a consistent pace might be a good indicator of prolonged success. A coach presumably gets his job (particularly in the Pac-12) because he has amassed success. He’s probably good at coaching a style he’s become an expert in and gets his players to buy into that style, that system.

Howland’s career tempo variance (including 2005) is 3.9. Need context? Me too. So I found the career variance for every active coach in the Pac-12:

This suggests that Howland was about the median amongst current Pac-12 coaches. Of course none of these men have been fired, so it seems there isn’t a great deal to take away from this regarding the understanding of whether varying from one’s career tempo foretells anything about job security.

The above data will come into play as we monitor the 2014-15 season. Will Krystokowiak begin to normalize as his plan comes into effect? He’s had so little talent at times in Utah that he probably hasn’t been able to dictate tempo. The rest of the Pac dictated Utah’s pace. I predict this season will look a lot more like what a K team wants to be. Will Sendek continue to push the gas pedal? He’s notably played both sides of the continuum. Thus high variance. What’s Ernie’s plan? More to come.

The hypothesis is that greatly deviating from one’s established norm is indicative of a hot seat (if not an already fired man). A desperate times call for desperate measures type theory. So I developed a list of fired Pac-12 coaches and some other notable leads who were relieved of their duties. Here’s what I found:

The major variance culprits were Ken Bone and Seth Greenberg. Each of their last teams played greater than 6% differently (based on AdjT) than their respective career averages. In both cases it was the coach’s slowest team.

Ben Braun significantly deviated from his average tempo, 66, prior to being fired, too. But what I found interesting here was that in each of his final seasons, he tried both extremes: 69.5 in his last season at Cal was the fastest team he’s ever coached, 63.9 at Rice was the second slowest. Mike Davis tried the same extremes in his final campaigns in Bloomington and Birmingham, respectively. Desperate times, desperate measures. 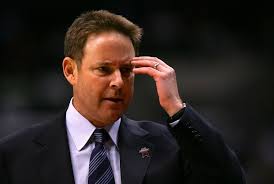 I’d like to reiterate that this is far from an exact science. I’ve already cited Ben Howland’s fastest season, 2005. It was his first dance with UCLA before reverting to his norm and rattling off three straight Final Fours. Clearly, he was not fired after losing to Texas Tech in the 2005 tournament.

But this is an interesting exercise in understanding what makes a given coach good at what he does. So often we’re thrown coach speak about ‘staying the course’ and ‘respecting the process,’ practices I don’t disagree with. It’s therefore interesting to me the times these guys do deviate from what seems to be their course; the paths that made them successful to this point. So while I’m not necessarily saying that a change of pace is indicative of a coach’s impending fall from grace, I do think it can be a telling sign.

Which might draw our attention to the warmer seats in this year’s conference, namely Lorenzo Romar. For the record, I think his job is relatively secure. He’s garnered enough good juju to weather the storm he’s in. But three straight seasons of decreasing win totals isn’t exactly deserving a vote of confidence. He’s had one of the higher degrees of tempo variance amongst current Pac-12 coaches (7.58) and had never coached a Washington team to a sub-70 tempo until…the last three seasons when we’ve seen the bottom begin to fall out. Two seasons ago was the slowest UW team he’s ever coached (65.7). He survived that turn and KenPom actually projects the Huskies at a 70.5 AdjT this season. Further, he’s got the forthcoming recruiting classes and so I reiterate, Romar has banked some good merit in the Athletic Department. He’s coached an NCAA one-seed. But if he’d never had that success, it’s easy to imagine his slowest team and their 17-15 record earning him a pink slip. 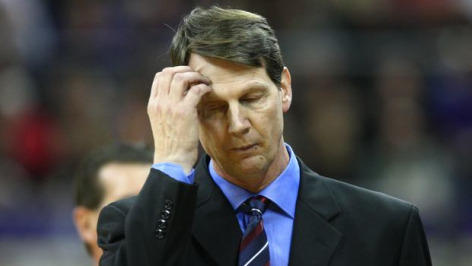 Ken Bone was let go my WSU after a slow season.

We could ask Ken Bone about it. He’s now an assistant at Montana after coaching Washington State to a 10-21 record at the second slowest pace he’s ever coached. They were 6.2% slower than the average Ken Bone team. It’s also worth noting here (with reverence to Romar’s 2014 Huskies) that last season was a historically fast paced season. Examine this KPI spreadsheet for more. Scoring was up at to a four-year high. Rules changes behooved the fast and I looked into it, too. Which is all to say that Bone likely was playing at an even slower pace than what was calculated. Rules changes helped his offense. Just as it did Romar and any other coach flirting with a style change last year. Of course, these trends suggest that speeding up your offense, forcing the defense to make a play and thus more likely to commit a foul (FTA/game was up 13% vs. 2013). Alas, that’s not the strategic changes these men chose to make. It may have cost Ken Bone his job.

Of course Bone also had the highest variance of any coach studied, perhaps giving merit to the idea that it’s really tough to get talent to Pullman. And which also begs the question of whether or not there is a correlation between winning and tempo variance (we’ll examine that next and take into consideration the rules changes with their affect on tempo).

It can’t go overstated that this is not an exact science. A slowing or accelerated tempo doesn’t necessarily mean the axe is coming. But it just might be the Blue Mountains on a Coors Light: an indicator that a shitty beer is trying just a little harder to be less bad.

(I still enjoy a tailgating with a CL).