Happy New Years Everyone. See you on the 15. Conference play starts this week.

Will the Cougars be a permanent fixture at the bottom of these rankings? Scan the rest of this week’s rankings and you’ll find that I can be quite volatile and susceptible to the results of a single game. Basically, Washington State needs just a conference win to jump out of the cellar. LEGGGGGOOO! 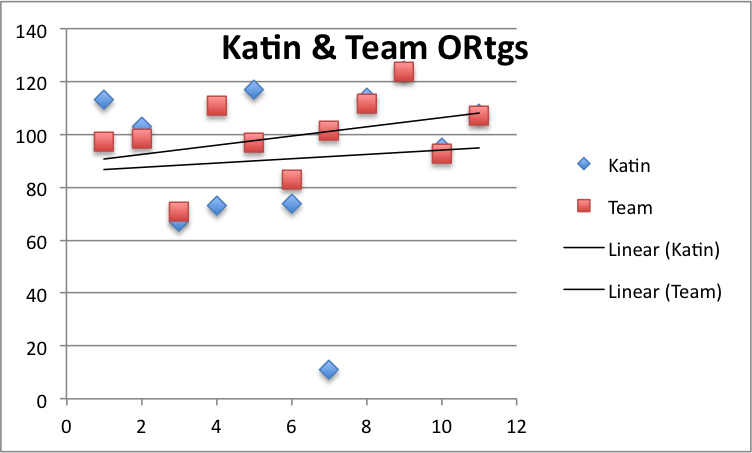 Katin – who leads the team in usage and is a notorious volume shooter – is becoming more efficient, and so too are the Trojans!

If I spent Christmas in Hawaii I imagine I’d have a good time. I also think winning is a lot of fun. Ipso facto, I believe the Colorado Buffalo Christmas wasn’t the kind of Hawaiian festivus I’d like to have. They went 1-2 with losses to a President and a school under immense sanctions. They lost by a combined six points. Lump of coal.

The Harvard of Academics beat the Harvard. Poetry.

Here’s to hoping the visiting Gauchos spent a little too much time face deep in Solo Cups at Isla Vista over the holidays. They’re the highest rated team to visit Corvallis and the Beavers could certainly take advantage of someone else’s Holiday hangover. That game, btw, is tonight.

S-E-C. S-E-C. S-E-C. The Bruins have now lost two straight to the adored conference, dropping that miserable game to Kentucky and now traveling to Bama and falling, 56-50, after a valiant-but-short comeback. In what may become a segment of Bench Watch: UCLA and the Exhausted Cinco the Bruins now rank 342nd in percentage of bench minutes used.

Here’s fodder for a forthcoming blog post: Joe Young Shoots too much at School. That’s the Fox News headline designed to grab you in. Sorry. I suppose I could turn the post into a Buzzfeed-esque number and write 79 Three Pointers Joe Young Shouldn’t Have Shot but I don’t have the time or inclination to watch that much UO video. Holler at me if you do, we can partner. But there’s something basketball to this. He’s taking more than 50% of his shots from downtown, up from 42% last year. He’s also making them at a significantly lower clip than last season (41% vs. 33%). Further, he isn’t getting to the rim or the line nearly as often. Like I said, bigger post coming.

The staple of Cuonzo Martin teams has been rebounding and defense. It’s modern basketball at it’s general finest – or ugliest – and on occasion, a team’s inability to score is going to rear its ugly head. In losing at home to Cal State Bakersfield, Cal managed a paltry 0.81 points per possession which is all a long winded way of saying: They’re going to miss Jabari Bird.

I CALLED IT and I’m about as pumped as Baby Face Bobby Cartwright down there:

In a flexing of pure college basketball, Stanford got its two best players hot (Brown + Randle = 47 points) and did just enough defensively to stave off the Longhorns. I repeat: Called it. But I’ll throw one other thought in there: Was this pure Rick Barnes? Thinkaboutit.

Had I been publishing this on Monday, I’d have ranked the Dawgs second in the conference. Instead they flexed their own CBB muscle and lost – at home – to Stony Brook by yielding 23 points in the game’s final 10 minutes.

If you were paying attention to Las Vegas last Tuesday night you saw a brand new blue print for beating Arizona: Isolate Brandon Ashley and Gabe York defensively. Of course you’ll need a PF/G combo and some phantom fouls that hold Rondae Hollis-Jefferson to 18 minutes, but here are the teams I think that can exploit that iso scenario:

Naturally, in their inaugural week atop the PacHoops Power Rankings, the Utes will triumphantly and heroically host the NAIA Carrol (Montana) Fighting Saints. If you’re interested in attending the Fighting Saints’ “100 Years of Basketball Dinner” on January 16, I’d recommend it. Dinner and live music for just $40.