Pac-12 basketball is back and promptly things returned to how we know them. Which is nothing. The Bay schools let the Huskies know that they ain’t gotta go home, but they had to get the heck outta here. UCLA fans have fired up the same sentiment for their coach. Jordan Matthews? Well this week we’ll call him butter, cause he’s on a roll. Regarding our rankings, Utah remains at the top, a slaughtering of the LA schools their work, that looked just as cool as…well you know. A little of the good stuff:

The Trojans showed that Los Angeles is most certainly at sea-level and SLC and Boulder are not. They might actually be regressing on defense despite last week’s note that they’ve been improving. Should we look at Katin Reinhardt’s output? Let’s. 6-20 for the weekend with just two rebounds and four assists. It’s not quite Alfordian (2-for-the-voluminous-weekend), but it isn’t going to help win a ton of games for ya.

Here, in this competition of our talents, allow me to give you more opportunities – for free – to beat me while I simultaneously reduce my opportunity to beat you. Turnovers are never going to help you beat anyone, least of all Arizona. The Sun Devils rank 294th in TO rate, 14.5 per game. When you’re already a member of the middle amoeba – and on the lower part of it – you can’t afford to be giving teams extra opportunities. Last night, they committed a season high, 22.

Cellar dwellers no more! Well done and having not paid super close attention to this team, my CougCenter faithful have kept me abreast of their incremental progress. Which alerts me, let’s take a look at Josh Hawkinson. Did you know he was averaging a double-double? He went for 11 and 15 against Stanford and didn’t make a single field goal. So the Cardinal rolled – this is about Josh. The Cougs got a nice win in Berkeley – their best of the season – let’s see them roll with this back to the Palouse.

Bryce Alford and I made the same number of three-pointers this weekend. Hell, we’ve made the same number of threes in 2015. I’ll leave the math to you. But let’s focus on the big picture here: You cannot fully judge the Steve Alford hire 15 games into year two. It’s maybe not the best hire – they might’ve done “better” – but even that guy couldn’t have been fairly judged this deep. Alford has been “cursed” with three first rounders. He lost two critical pieces in September – the brink of the season – that effectively blew up the Bruins’ depth. John Octeus and Jonah Bolden would’ve helped. I won’t judge the Alford hire until he’s had time to build. To date, he’s only had an opportunity to start. For whatever it’s worth, there were zero google search results for “Brad Stevens buy out” in the greater Los Angeles area this weekend. I checked.

Lost. Played well-ish. I’ll rarely knock an underdog for competing – and losing – on the road.

The Buffaloes are 2-0 without Josh Scott so clearly that was the problem. The 6’10” guy with an offensive efficiency just this side of the perfect machine was holding the Buffs back. OK, clearly that’s not the case. This was a significant weekend for Colorado. I’d begun to give up on them. Others, too. The Buffs had never beaten UCLA and then they did it without their best player. But the thing in sweeping the LA schools that I noticed most was that the Buffs were playing their best basketball as Xavier Johnson was playing his most inspired basketball. It’s not my favorite that the kid is externally motivated – it takes a something for him to get interested – but when he is, he’s a game changer. The leader of the Buff renaissance. Oh, and it never hurts CU basketball to have Askia Booker shoot 46% for the weekend.

So this is exactly what I was talking about when I said that the middle portion of the conference might cannibalize. Cal beats Washington then losses to Washington State. I also said that losing to WSU is what’s going to cost a team – like Cal – a shot at an invitation to the big Dance. Conversely, beating teams like Washington is going to get them a chance to dance. Beating Washington impressed me but I’m ultimately that low on Washington State; hence the Bears are still ranked below Washington. Fair? That’s where you take your kids. We need a takeaway, however, beyond Cal being a classically enigmatic squad, for which I present to you Exhibit Matthews, Jordan. The sophomore scored 27.5 per game for the weekend on 53% shooting which projects to be lethal upon the return of Jabari.

Do we excuse this weekend as classic Washington, struggling on the road? Or do we demand more of the 21st best team in the country? At this point they aren’t the 21st best team and at this point they’ve lost three in a row. I also think the Dawgs helped confirm that the Bay trip is the toughest of the travel locales. I’m going to withhold strong judgement of these Dawgs for their close road losses. Also, I managed this screen shot Sunday night: 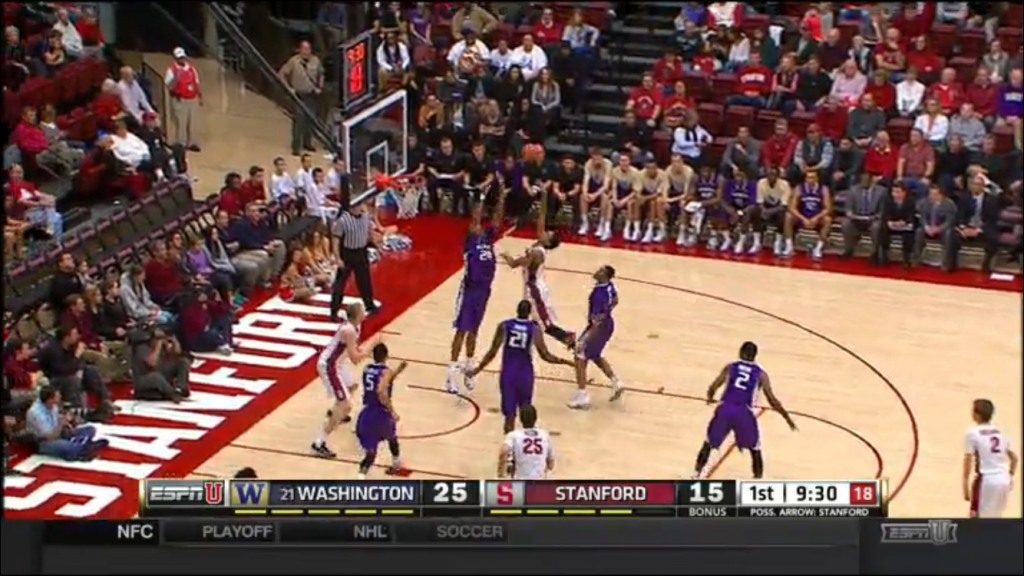 This is what Upshaq does. He affects change.

One week and I kinda wish the Mayor of Oregon, Ohio would change the city’s name. Did you know that six Pac-12 teams scored fewer points that Mariota’s Ducks this weekend? To basketball: So I think we’ll agree that the middle Pac teams will be called the Middle Amoeba. I noted it above in describing ASU but we’ll coin it here. This week’s biggest beneficiary of the Middle Amoeba’s cannibalism was the Ducks. They took care of home business – the Civil War. Everyone else did weird shit so Oregon’s #4 this week.

Pop Quiz: Overtime against Washington was forced when Chasson Randle tied the game by:

A) Jacking up a(nother) off balance three (of which he went 1-7 on the game for)
B) Driving at the rim, daring to attack the nation’s leading shot blocker

If you guessed B you are correct and if you guessed A I wouldn’t have blamed you. We talked about it last week, let’s get Randle at the rim. He was 2-11 from distance this weekend. The rim – or at least attacking – has got to be his happy place. From a team perspective, big sweep this weekend for the enigmatic Cardinal and here’s a stat that supports their enigmatic ways: In the games first 10 minutes, Washington was allowed to shoot 80%. In the second ten minutes, the Huskies were oh-for-the-remained-of-the-half. I call it: The perfect Stanford half.

I was really interested in getting to watch this game. Naturally I was pumped to know that I was flying Southwest during the game and Southwest offers Fox Sports 1. You guys! This is perfect. I was going to listen to Gus Jeezy and Raftery call a Cats game while trekking my way back to San Francisco. Two birds, one stone. Everyone loves efficiency. My flight had no WiFi. Instead of watching Arizona dispose of the Sun Devils and their UNLV demons, I read Unbroken and passed out. Twice. Speaking of instances of two, Sean Miller made two lineup changes, one of which we noted in last week’s power rankings. According to Miller, it was indeed time start Rondae Hollis-Jefferson. He also slotted (the second move) Elliot Pitts into the starting lineup. Keep an eye on the long term affects of this change and the play of Gabe York. It’ll be interesting to see what Miller does next considering Stanley Johnson will not be coming off the bench for another game.

Any time you can send Bruins Nation into a flurry of lynchmobdom, you get points in my book. Sure it doesn’t take much – a Bruin loss more incendiary than the La Brea tar pits – but UCLA hadn’t scored that few points (39) in a game since 1967 (they won that game, btw). But enough about UCLA, Utah was making statements this weekend. They dominated the Bruins, holding them to the same points per possession as the vaunted Kentucky Wildcats (0.65). Ignore that USC and UCLA are proving themselves not very good. One more thought: Utah leads the conference in 3-point FG%.

One thought on “PacHoops Power Rankings: BooYah, We’re Back”