I was very curious how The Drive was going to be introduced. The Pac-12 Networks cuts up so much content that I was really excited to see what they came up with. Naturally things opened with a Wooden shot. Makes sense. But could there have been an any more fitting opening to behind the scene’s 2014-15 Pac-12 footage than Tad Boyle telling the most disappointing team in the conference that “it’s time for us to start playing the way we’re capable of playing.” I love you Pac-12 Networks.

The show itself opens with a less-than-subtle reminder that the Networks is running this shit: A taped sign on the McKale railing that states practice is closed. Immediately we’re brought into practice. We’re special. Once inside practice, we catch Miller reading off of a practice plan. This is one of hundreds of practices he has total recall over and it’s an agenda he’s likely written months, if not years, ago. He probably doesn’t even need to read it. He reads from the paper with the enthusiasm you’d imagine he’d read such predictable text with. Little. He then looks up and tells his team, “Fellahs, I’ve never been more excited for anything in my life than this practice.” I almost ran through a wall. 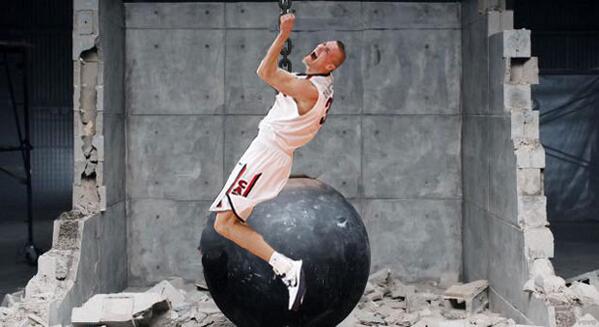 Stemming from the following sequences, I was drawn to note two things throughout the Arizona portions of The Drive. 1) Sean Miller demon smiles, and 2) Arizona dunks. We’ll revisit this later.

The show is full of different montages and interviews. The first player to be interviewed and featured is Kaleb Tarczewski. When we’re introduced to Kaleb, no time is wasted in noting his size. He’s large. As he gets into his background and growing up in New Hampshire, in a rare twist of reversed gender roles, Kaleb tells us it was his mother who built the backcountry cabin the family grew up in. #HighCeilings. He then enlightens us as to the phonetic derivation of his nickname, Zeus. Oh you! You silly-seven-foot-son-of-a-New-Hampshire-woodswoman. Go fill a lane while your coach tells us your game impact is unquantifiable. This is so us. The Pac-12 made us relive all the Haas events of 2/1/2014.

And then it was on to Stanley Johnson. He’s more unveiled than introduced. The first shots are of the freshman lacing his shoes. He’s doubled over himself, seated as he prepares for practice. That’s followed by a shot of him in line, once again hiding his mass as he’s hands on knees, not allowing himself to be fully displayed. As Miller quantifies Stanley’s size of the slow shots of him, we’re still not privileged with the entire package. He’s fading away, defended on a jumper. More measurements and then – IT’S A DUNK MONTAGE. The curtain isn’t lifted away, it’s torn off, the unveiling of Sean Miller’s greatest weapon he’s ever acquired in all of his thunderous and terrifying glory. THIS IS MY WRECKING BALL. DEMON SMILE.

Kaleb then admits that as a freshman, he was a deer in headlights. Stanley, he notes, is not. We’re graced with Miller’s fifth demon smile as he informs us that you shouldn’t come to Arizona unless you’re prepared to handle the pressure and expectations that accompany a program like that. Commercial. 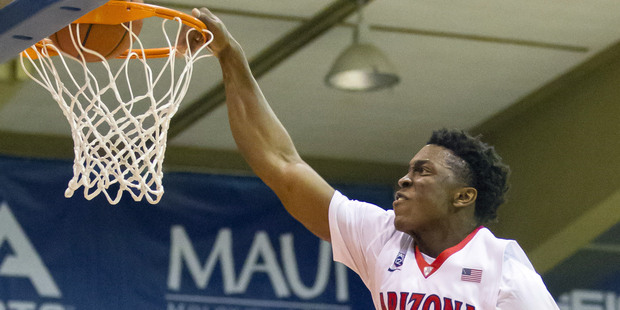 Sticking to the theme of montages and interviews, we kick things off Arizona State-style with none other than…a larger than life banner of James Harden. Ok, so it was probably a touch into the footage and in the background. I’ll distinguish that it was not featured. But I’ll be damned if it wasn’t real early in the ASU portion. You can’t tell me the schools (read: Coaches) don’t have a hand in the cutting of this stuff. This is behind the scenes of their baby’s. Miller later says something to the extent of, “When you’ve been in this long enough, you realize we don’t have an easy job.”

And if we’re to take the following Sendek quotes at face value, then I’ll agree. These guys don’t have an easy job. Herb:

“They score on this every. single. game.”

“When you’re open. Shoot! Now here’s the flip side of that. When you’re not open, you don’t shoot.”

“I don’t want to overcomplicate life, but we gotta play basketball, right?”

Herb also started this sequence off by stating, “What you need in this situation…is right here.” He was in a defensive stance, markedly moving his arms. He looked like this:

ASU is about to win nine straight titles.

Shaq McKissic went to prison. He didn’t have a dad growing up and his best friend was shot dead. Shaq McKissic has lived some. Adversity, for a sports audience, has found its way into his home. We’re given the opportunity to learn more about the hurdles he’s overcome from his family. From Shaq, too, but what I especially appreciated here was that we heard directly from the support system that’s helped this young man overcome those challenges. I know Student-Athlete is a punchline but when you hear Herb say that the NCAA awarded Shaq an additional year and that he’ll now graduate, you’ve got to smile. Or at least be impressed. We’re talking about a degree he thought about from a jail cell. He couldn’t sign a lease while paying his own way at Edmunds Community College in Seattle. Congratulations. You know how we’re going to celebrate? YOUR OWN DUNK MONTAGE. Commercial.

We’re now brought to what all of these scenes have built to: The Territorial Cup. Two coaches with history; two schools with hatred; one team with talent; a basketball.

We already saw this game in January so replaying things isn’t too exciting. Unlike in football, we don’t get nearly the same sideline intimacy. Still the best. The next best thing would be to have terrific commentary for the game. Rather than dub the game over, re-narrate what we’d already seen, they cut things up such that our story is retold by none other than Gus Johnson and Bill Raftery. GUS JEEZY AND…well Bill whom I don’t think has a great nickname but, nevertheless, the terrific tandem calls the game for us. Arizona wins and we head to the press room. Sendek says niceties about his team. Miller opens with a comment about practice. Surprised? Not me. Refresher:

First game after the UNLV loss and then…OH HAAAAAAY! My DVR cut out because the actual Arizona game (90-56 over Oregon) ran into the debut. The rigidity of my DVR left me with about four minutes remaining. Let me guess: Arizona loses to Oregon State?

Let this be a cautionary tale. Record The Drive and then some because this thing is airs right up on the tale end of basketball games being played at historically slow rates. Get some extra DVR space even if this is fixed duration viewing.

I love you Pac-12 Networks.