Before we get too serious with things, I want to remind all Oregon fans that there are two games this weekend – in Eugene – and their attendance would likely be appreciated. That said, if you’re preoccupied, I’d understand. Hell, Dana Altman might even get it. SCOOOOO BUCKS DUCKS. Allow me to remind you that I’m a heart divided. Grandpa – who’s daughter is featured at the tail of this post – gave me a different Ohio State sweatshirt for the first 13 years of my life. I grew up in scarlet hoodies – for the weekend a year that I’d wear one in Arizona – and dad telling me what an asshole Woody Hayes was (great story about my dad’s law partner and Woody Hayes, ask me about it some time). But after grandpa, grandma, a buncha cousins, and a video of my mom telling me she’d root for OSU over Arizona (her alma mater) I have some really good Duckships (which is friendships with Duck fans). Am I split? Probably not. Let’s talk Monday around 10 PST. I love all y’all.

The obvious call here is the first ever CFP championship game in which Oregon or Ohio State will arguably earn themselves the moniker of MOST DESERVING COLLEGE FOOTBALL CHAMPION EVER. That’s literally what I’ll run with. In the hoops world this is – to be honest – a really uninteresting week of Pac-12 basketball. Can we say that in week two? Am I supposed to hype something that’s unhypable? Neverthless, I think the game I’m most interested in is Stanford’s visit to UCLA. It’s doesn’t feature the two best teams to face off or arguably anything even that close to it. But Stanford came it at #3 in our Power Rankings this week suggesting, they’re good. Good enough to beat UCLA in Pauley. For UCLA, that would be six straight. Reeling. Conversely, this would be a really big win for a team that needs a really big win. The Bruins are capable of doing it but will they? I’ll be watching to see if Bryce Alford can connect on his first three point bucket of 20-Quinceañera.

This one’s pretty clear to me but if you disagree, you have the opportunity to channel hop. Simulcast with our GotW – Thursday at 6pm PST on FS1 – will be Arizona State’s visit to Corvallis. While I like what Oregon State is doing with Tinkle Time, and think this is one of their best opportunities at a distinguishing win, I really don’t think this is remotely must-see. You can probably save yourself the thumbing, stick to ESPN and the ‘Furd-UCLA game, and use TV timeouts for things like the restroom or calisthenics.

Sorry to be redundant but it’s got to be UCLA here. They’re losers of five straight and in unimpressive fashion. But, because I’m not going to harp on one team throughout our Week 2 Preview, the team with the most to prove could be the Oregon Ducks. On WANE this week, Spencer and I talked about this being a sleeping giant (can you call a team that mid-season? I feel like that’s a phrase reserved for the “Program” level and perennially used to make ASU football fans feel good). The Ducks have played well for the most part and host the Wildcats who haven’t won in Eugene since 2010 (which is misleading because it was December 30th 2010 but nevertheless it’s been quite awhile).

Also going to give a Colorado mention. They played better against the LA schools, got a kick in the emos from Xavier Johnson, did it all without Josh Scott (whom they’ll get back tonight at Utah) and won’t be lost in the thin air of Salt Lake. Further, they’d kicked the demons of never beating UCLA so why not this curse, too:

UCLA? Nah. OK but seriously. UCLA. But for serious, we’re so early and the schedule is so light that there isn’t much for people to lose. If forced to pick – and I’m forcing myself to pick – I’m going with the Cal Bears. After a big win over UW they lost to WSU suggesting anything is possible. So losing to USC on the heels of that would be bad. Malo if you’re speakin’ Spanish.

This is our newest feature where I text my mom or another family member about the happenings of last week’s Pac-12 to see what she or they have to say. I already can’t wait for next week: 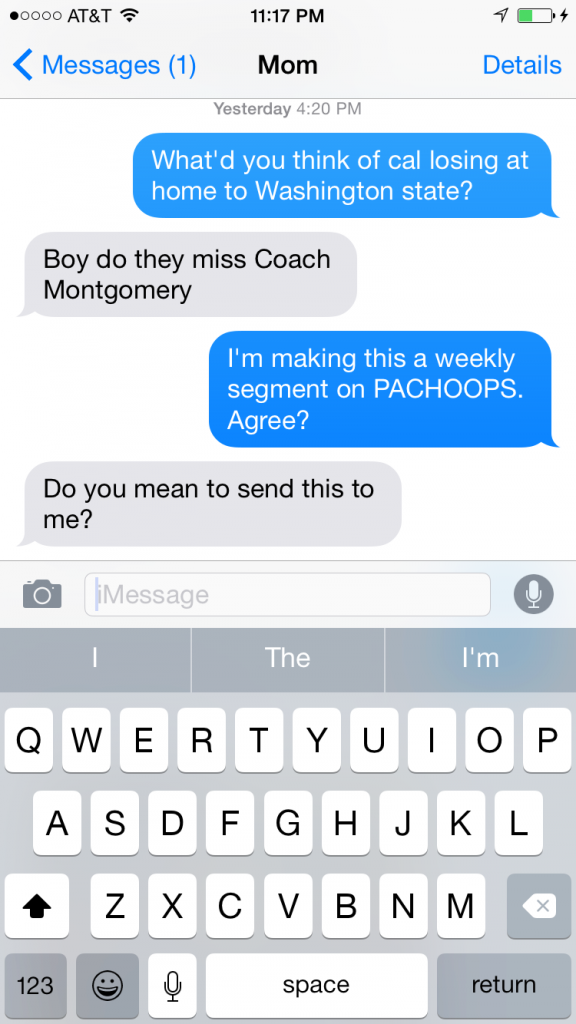