We know Delon Wright is really good and that he’s uniquely gifted at getting to the rim. Last year it was at insane levels as 62% of his offense was a layup or dunk attempt which he made 71% of the time. He exploded onto the scene and to the rim and we took notice.

Presumably, 2015 wasn’t going to surprise us. Last year he was a JuCo transfer, the kid brother of Dorrel. He could sneak up on you.

And to an extent, defenses have adjusted. He’s taking a lower percentage of shots at the rim in 2015 and connecting at a less frequent rate. He’s also taking a few more threes. A shot he hasn’t necessarily improved upon making. Shot charts provided from shotanalytics.com: 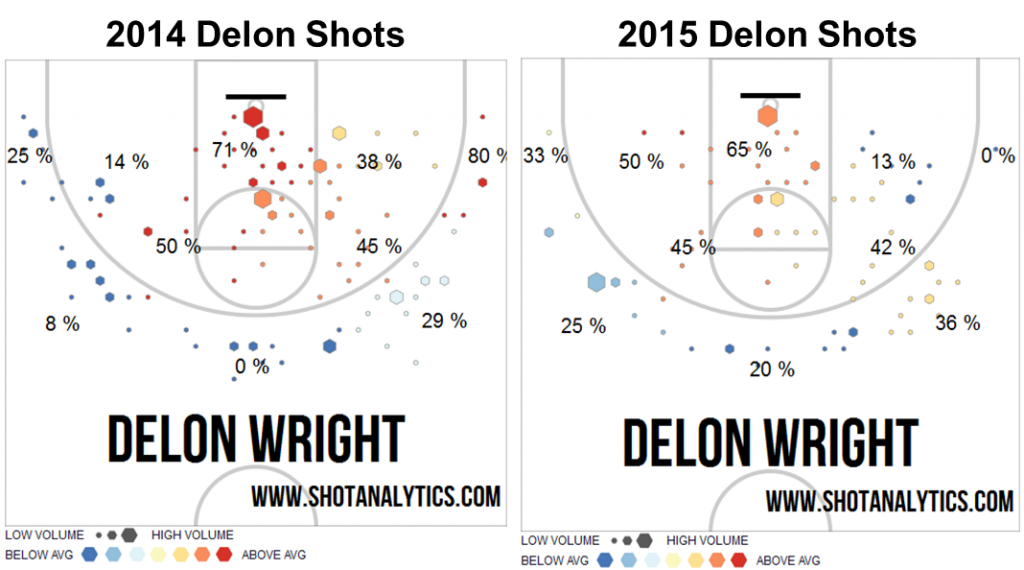 If for whatever reason Wright’s 2015 hasn’t yet impressed you, what the shot chart doesn’t capture is that last year 30% of those buckets at the rim were assisted. This year, that number has dropped to just 14.8%. Delon is working for these buckets.

We also can note that Delon has significantly increased his assist rate in 2015. He ranks 28th nationally in that category, improving his assist rate by nearly 25%. So what might all of this mean? Let’s see what it perhaps looks like first:

In 2014, Utah was taking a very average number of three pointers (32.6% of offense from deep) and connecting at a similarly average rate (35.1% 3FG%). They ranked 15th in 2FG%, however. So, in an effort to not be surprised, defenses have made an effort to better defend the paint against Utah. The GIF above shows a crowded lane. This is commonplace and so Delon has made the effort to, once again, surprise us.

Amongst all of Delon Wright’s assists, 56.4% of them result in three pointers. Last year it was 42%. Delon can still get to the rim, it’s just now a more crowded place for him, leaving the three point line undefended and available for the likes of Brandon Taylor and Jordan Loveridge to rain. And rain they have. Combined, these two are shooting 45% from deep and have made 96 threes.

Delon Wright still gets his buckets where – and seemingly when – he wants to. And while he may only be shooting 30.9% from distance, the surprise is now that he and his Ute teammates are killing you from deep, too. Surprise!

One thought on “Delon Wright Is Still Surprising Us”