The first thing we need to acknowledge is that this is not your dad’s UCLA Bruins. They’re Bryce’s dad’s UCLA Bruins which – ipso facto – means they’re Bryce’s UCLA Bruins (more later). But what we actually need to recognize is that this is not last year’s Bruins. That was a transition monster. A ball hawking (5th highest steal %), Kyle Anderson-ing (remember this?), anti-Ben Ball (38th fastest tempo), bucket accumulating (15th most efficient offense) monster. This ain’t them. Here’s what they look like in paint glory: 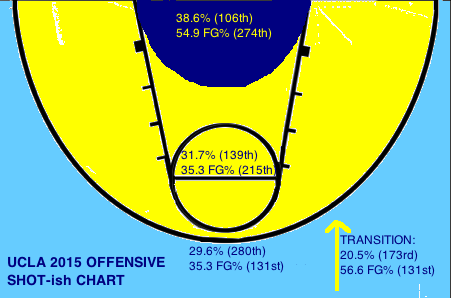 Numbers, across the board, that look pretty pedestrian (for their collective shot chart, check Shot Analytics’ UCLA page) that’s produces the 44th most efficient offense in the nation. Interestingly enough, for as much as we discuss Bryce as a three-point chucker, the Bruin collective doesn’t shoot that many of them (29.6%). They also aren’t quite the mid-range threat they once were (a shot Arizona forces teams to take at alarming rates). This team is quite balanced and plays best when they’re collectively balanced. In UCLA wins, the Bruins Assist/FGM ratio is 60%. In losses, that assist ratio drops to just 44% – there is no ME in Bruin. Making the game easier for themselves is imperative as UCLA uses their bench almost never. A last note: Their transition offense is also quite average while last season’s was off the charts. This component of an offense can often be dictated by…

A zone is often relief for a brief bench. The Bruins don’t have enough bodies to run a consistent man defense so they protect themselves in a zone. They often put length (read: Kevon Looney) at the top of the zone but also run a few variations within their defensive scheme. If you’ve seen this in action, you’ll know their D is not the most active thing you’ve ever seen. They’re not forcing turnovers like they once did (248th nationally) which suggests the lane is full of powder blue. See for yourselves: 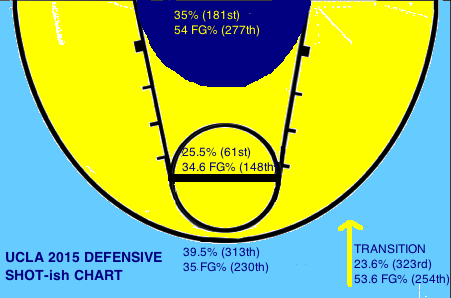 Nearly 40% of opponents’ shots come from beyond the arc which is a gamble we’ve previously discussed regarding UCLA’s zone. Basically you’re either jacking a three or getting a shot at the rim against this team. Fortunately, the Bruins protect the rim effectively enough (that rim FG% is pretty low). And when I note this defense’s inactivity, it’s perhaps a purveyor of transition: 23.6% of offense against UCLA is coming on the break. This is a tough factor considering UCLA’s propensity to zone in which players have specific areas to cover. Expect UCLA to take things real easy on the offensive glass for this game (they crash at the second highest rate in the Pac) in order to get back and limit Arizona’s transition game.

The Recipe to Beating Arizona:

We’ve seen it work three times this season. Here are a forward and a guard’s numbers in Arizona’s three losses:

These players are unique call outs because these are the players elected to operate in isolation against Brandon Ashley and Gabe York. Does UCLA have anyone that could potentially fit the bill of an overpowering guard and a scoring adept forward? Yes.

He attacks differently than he did a season ago but that – in the vacuum of Saturday’s rivalry game – isn’t necessarily a bad thing. “Just” 47.6% of his shots come at the rim and his foul rate has stayed consistent at about 40%. As a senior, his usage has significantly increased to 23.6% and he’s taking and making more threes. Net-net, he’s a fantastic offensive threat and a physical specimen. He’s also getting to the line more and – the part most worrisome to Wildcat fans fearful of York isos – is that of his 89 makes at the rim, just 25 (28.1%) have been assisted. Last year, that mark was much higher (47%) suggesting that Norman is more than capable of making his own magic happen. Plus, he’s done it before, scoring 15 points in last season’s Pac-12 Championship Game against the Wildcats.

Heard this from Walton on Wednesday night before he went into an entire diatribe about the importance of feeding the UCLA post that transitioned into the worldly and humanitarian need for renewable energy:

“I was there the night Bryce Alford fed the post.” Bill Walton

And what a night that must’ve been. Back to basketball (Pasch voice), Looney is shooting 60% FG% at the rim  (solid considering average is about 58%) yet just 40% of that offense is assisted. The increasing threat is that he also is connecting on 40% of his three point attempts. He has a body that projects into the NBA and is most certainly the primary candidate to bully Brandon Ashley. Shot Analytics shot chart: 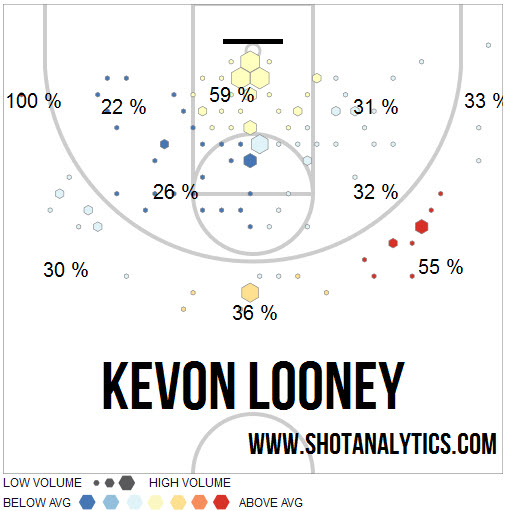 The primary concern for UCLA fans, when looking at the above chart, would be what appears to be a general, mid-range deficiency. He’s shooting just 28.8% from this distance and it’s a shot the Arizona defense is engineered to force him to take. The Cats force 44.5% of offense against them to the mid-range which ranks 3rd nationally. Of course if Arizona is forcing Looney jumpers then the collective defense is playing well and that’ll be an issue for all of UCLA in and of itself.

Arizona has a lot of them. UCLA not so much.

Once again, everyone is quick to attack Arizona’s shooting abilities. The Wildcats counter that by being even quicker to attack the basket. Why take threes when Arizona connects on  the 13th best 2FG% in the nation? TJ McConnell is a mid-range monster in his own right, slicing through zone defenses built to force him to shoot. He’s shooting well and passing better. And why take threes when you can take free throws? Arizona has the 13th highest free throw rate in the nation led by Rondae Hollis-Jefferson and Stanley <3 Contact Johnson. The latter of these anti-three threats has got to be the most concerning for UCLA considering their short bench.

Basically, Arizona chooses to not shoot threes for higher percentage shots. When they do fire from long range, they’re connecting at an above-NCAA-average, 35.7% 3FG%. The Bruins, however, play a defense that forces teams to shoot threes. Last year (with similar styles in play) Arizona shot 9-22 in a loss and 6-18 in a win. Meanwhile, the Wildcats are going to test that poor transition defense. If UCLA crashes the offensive glass against the nation’s top defensive rebounding team they’ll be putting themselves in a position to fail. McConnell is happy to push the pace and Parker Jackson-Cartwright is once again cleared to play, allowing the second unit to operate similarly to the first.

Last year’s Arizona defense was – when historically contextualized  – the third best defense of the modern era. And last year, in both contests, UCLA had two very impressive offensive outputs (75 points/1.07ppp & 75 points/1.09ppp) against that D. This Arizona defense isn’t as good but it isn’t far behind. They currently rate fifth in defensive efficiency and they do such by:

UCLA doesn’t particularly attack the rim (35% of offense there) and Alford isn’t feeding the post; they don’t shoot the mid-range ball well (215th in 2pt jumper FG%); they have a moderately fast offense but that dictates little about offensive output; they are, however, the second best offensive rebounding team in the conference (of course they’ll be facing the best defensive rebounding team in the nation so…).

They are who they are:

Sometimes players are polarizing to a fan base. Let’s look at two of those from both teams:

The cards are stacked against Bryce. Nepotism accusations are harder to shake than the ghost of John Wooden. Wait, bad analogy. But he is who he is. Bryce is on a team that has no point guard to back him up or even to play the position he’s perhaps not naturally suited to play. For any/all of the recruiting or roster building complaints you might have against his dad, Bryce is far from a dumpster fire. Decision making isn’t necessarily a strong suit but it wasn’t when you were a sophomore, either. He’s young and he’s got the keys to a car that has some beautiful parts but maybe don’t run so smoothly together. Jon Octeus’ exclusion from this team isn’t Bryce’s fault. His chin hair is: 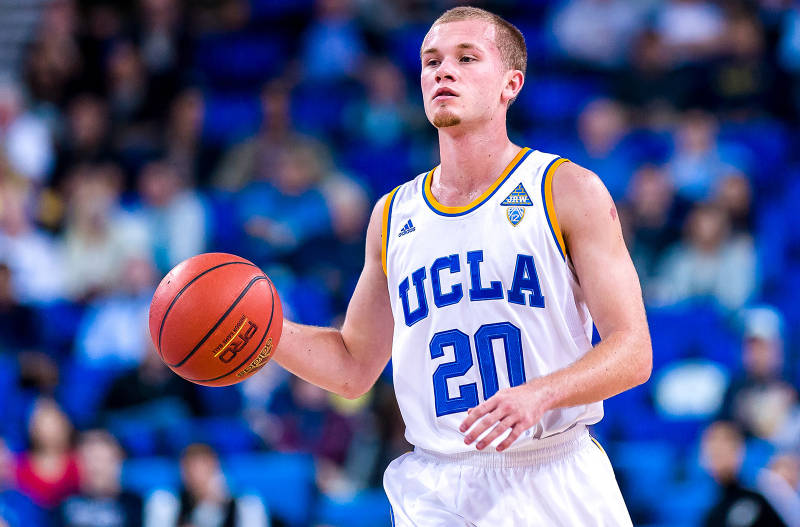 Zeus logs 65.1% of the game’s available minutes for a team that allows the third lowest percentage of shots at the rim in the nation. Zeus, if you didn’t know, is the Center. He averages less than a block per game and fewer rebounds per game than he did a season ago. It’d be easy to say Kaleb stinks. And many people have. Year-over-year, he hasn’t necessarily improved his turnover rate (read: BAD HANDS) or offensive efficiency (read: confidence?). But Kaleb is who is and he’s the integral part of Sean Miller’s rim protecting defense. There’s a tweet I can’t quite find from April-ish 2012 when Sean Miller wrote, “The days of 6’7″ centers is over.” He then brought in a recruiting class of Brandon Ashley, Grant Jerrett, and Kaleb Tarczewski. Maybe he’s not a walking double-double, but he knows his role on a team that features a pair of possible lottery picks and a point guard that’s managed to make Zeus look good on more than one occasion.

Earlier this week, Elite Daily posted rivalry week match ups feature All-Time great rosters. Naturally, no one agreed with any of it. Here’s my All-Time great UCLA vs. Arizona rosters: 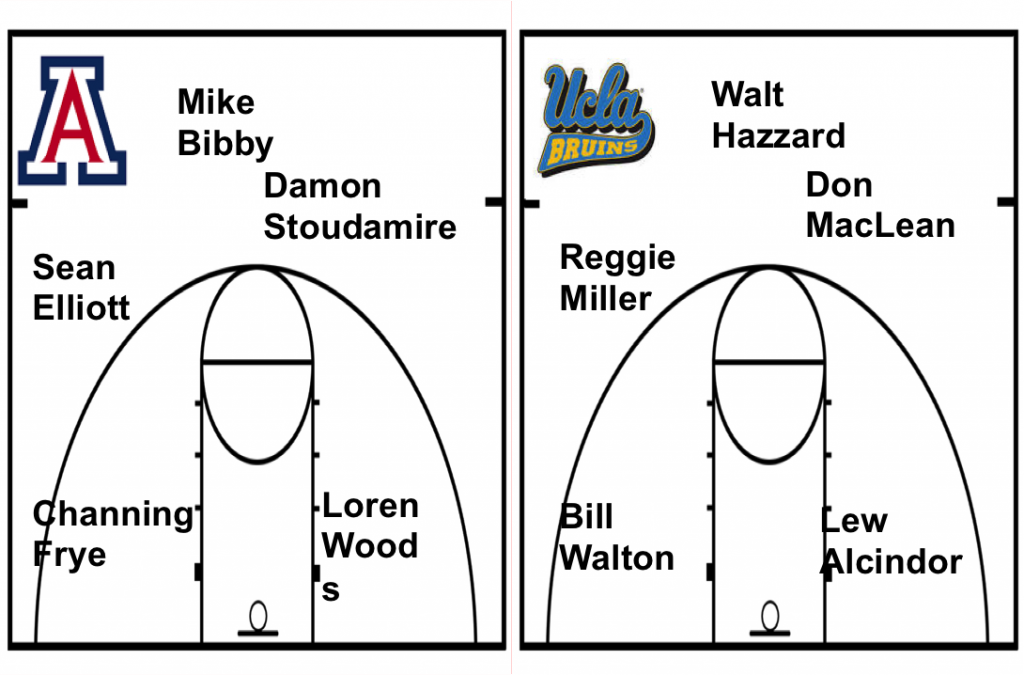 By the way, full credit to…

One thought on “Everything you need to know about UCLA @ Arizona”