When it comes to knowing everything about the Utah Utes, it’s not wrong to note Delon Wright. And while that’s both short sighted and narrow, it’s not entirely inaccurate. He’s just really damn good. But after two double-negatives in nearly as many sentences, credit where credit is rightfully due: Larry Krystkowiak. In my estimation he’s the man with the plan and its come to near perfect execution. He built his program for the 2015 season (and most certainly beyond) and that’s exactly how things have played out.

So more about this team.

Delon is terrific but what else is going on? A 6’5″ point-combo-guard does not alone constitute the fifth most efficient defense in the country. He alone does not protect the rim at alarmingly elite – if not destructive – levels. He alone does not carry a Top-20 3FG% (he actually detracts from it). There are a lot of layers to this Utah onion. Let’s peel:

The components of this offense aren’t overwhelming. The areas they shoot from are generally well spread with an affinity for threes because – you know – they make a ton of them. Here’s the shot chart from Shot Analytics and the locale breakdown: 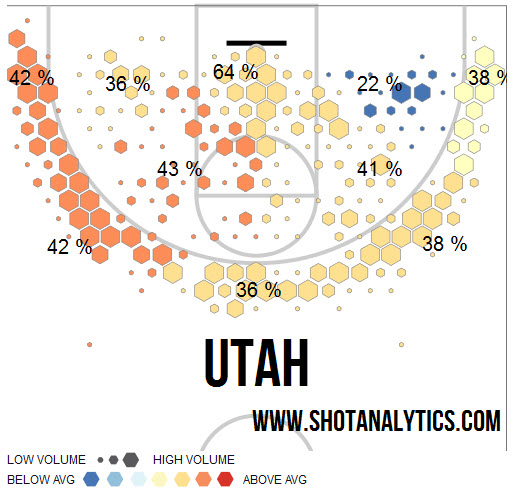 The Utes accomplish all of this at a deliberate pace (314th in adjusted tempo), but we’ll dive into that later.

As the shot distribution applies to playing Arizona, the Utes are a fantastic mid-range team. This is a shot Arizona will let them take (45% of shots against are jumpers). How does Arizona defend the three? 32% of shots are from deep and teams are making 32% of them. The latter is a below average rate and in summary their three-point D is certainly formidable. In Tucson, however, the Utes shot 9-19 from distance. That obviously was a non-factor but there is a precedent for hitting that critical shot against the Cats.

One thing to note – probably about both teams – is the manner in which they protect the rim. The Utes have fantastic size and do a great job of both limiting teams’ opportunities at the rim as well as affecting the shot itself. Arizona really only does one of these in that they simply don’t allow you to get to the rim: 8th lowest % of shots at the rim and when you do get there, you generally can convert (62% rim FG% is 281st nationally).

Back to Utah. They rank 77th in % shots at the rim and 23rd in FG% at the rim. This basically equates to tremendous difficulty scoring at the tin. When you consider that Utah really doesn’t allow you to take threes, that level of rim protection can be devastating. Perimeter defenders can be more aggressive in their three point D knowing the levels of protection. Additionally, more than 15% of shots at the rim are blocked which ranks 25th nationally and first in the conference. An impressive feat considering the Pac has (and had) two elite shot blockers in Jordan Bell and Robert Upshaw.

Arizona is a formidable shooting team despite what everyone says about them not being able to shoot. But whatever. The Wildcats have the 8th highest eFG% in the country despite taking the 340th lowest percentage of threes. Math tells me this means they are wildly effective inside the arc and Utah is most certainly going to challenge this. If you’ll recall the Tucson bout, TJ McConnell was dared into the paint and won. Can it happen again? Let’s ask Stanley.

The unique thing to point out is that the Average Possession Length (APL) for a Utah defensive possession is 17.6 seconds, the 56th fastest time in the country. More on that…now!

These are two fantastic teams. Dominant, really. Look at last night. They lead the conference in scoring margin and rank 4th (AZ) and 5th (Utah) in the nation in that stat. What this tells me is these teams do what they want. “This is what’s for dinner and you’re going to eat it. Finish your veggies and you’re not getting dessert.” Both teams are defense first with affective and efficient offenses to follow. Basically the same model.

Arizona follows a traditional route to elite defense: force teams into a low percentage shot (2 point jumpers) and allow no one to get to the rim for easy baskets. They don’t turn the ball over yielding transition baskets and they grab tons of rebounds (1st in defensive rebounding rate in the country). This adds up to very long defensive possessions. The APL for an Arizona defensive possession is 19.2 seconds, 297th slowest in the nation. This is a pretty normal thing for elite defenses. The rest of the Top-5 defenses rank as follows in defensive APL:

Wait what? Utah allows the 56th earliest shots against the fifth best defense in the country? I’m fascinated by this because they’re only the second Top-10 defense of the last 5 years to do this. Only Stephen F. Austin’s 2013 team had a swifter APL (they were 27-5 that season).

What does this means for Saturday night? Arizona loves to take early shots. They push the pace, running an offensive APL ranking 27th in the nation (easily the swiftest of Sean Miller’s career). Utah’s defense is geared to defend what Arizona’s offense will bring: Pace and paint attacks. In part, this is why I was disappointed to see Utah start in gimmicky zones in Tucson. They deviated from what they do.

When Utah is on offense they slow the hell out of the game. Their offensive APL ranks 329th (20.3 seconds). Compare that to Arizona’s 297th defensive  APL (19.2 seconds) and once again we see an offense and defense feeding into one another. How does Utah do it?

Take a look at this chart examining the Pac-12’s offenses 30-seconds-or-later into the shot clock:

The obvious takeaway is that USC is really bad. After that, we notice that Utah’s offense is not only geared towards late possessions, it’s wildly effective in those scenarios. Their late clock eFG% is better than eight Pac-12 teams’ collective eFG%. The primary culprit is Jordan Loveridge who takes 21% of his shots with five-or-fewer seconds to get it off. That’s nuts. That’s clutch. That’s what Utah does. It’s also what Arizona’s defense does.

It would seem that this is a factor that benefits Arizona. That perhaps their defense can be its best self later in the possession, only when Utah is finally making its effort. In Tucson, Utah took 6 shots late in the clock (15%) but connected at just a 24% eFG%.

I wish I could be there. I’m rumored to have two friends in attendance but they never really confirmed anything. I have an open dinner invitation from an old boss if I make to SLC. I’m not going to make it.

I think Arizona wins. They take it by 11 when it’s all said and done.