There have been a lot of articles and numbers being tossed around regarding Pac-12 attendance this season. Here’s 1000 more words and maybe what seven straight losses looks like:

I could have my hand forced into our second 50 Shades joke following WSU’s gray out. I’m going to do it: Take a look at Washington State’s KenPom numbers for 50 Shades of red: 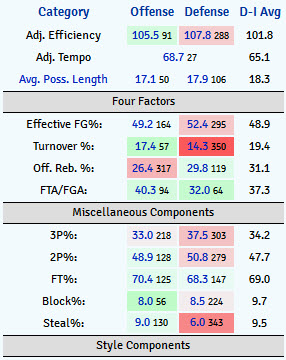 Andy Enfield now has four career Pac-12 wins. Ernie Kent has already surpassed this number at Washington State, as well has Wayne Tinkle at Oregon State and Steve Alford at UCLA. Four wins. 28 losses. This is what that looks like in a pie chart: 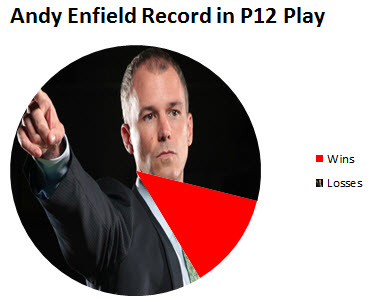 Before beating Stanford on Sunday, I was prepared to craft a letter to Tad Boyle saying it’d be cool if the season just ended. Like it’s cool dude, just sit the rest of this one out. Funny thing is, his team showed up. Sure their signs of vitality came against whatever you call a Johnny Dawkins team, but the heart was pumping and everyone was healthy again on the court. Askia shot about 6-21 inside the arc for the weekend and all could feel right again.

I’ve heard of snake bit but this? Oregon State just can’t win on the road. They’re 2-7 this year away from Gill.

I feel like there’s something to be said here about Larry Krystkowiak’s sweet grass burning ritual but I just can’t make the connection.

The Bears are 6-7 with a five game winning streak and a six game losing streak. It’s befuddling to say the least and how about this: In conference play, the Bears are operating at a -11.9 points per 100 possessions (95.7 Offensive Efficiency, 106.6 Defensive (in)Efficiency). For comparison’s sake, I looked at the same margin for other 6-7 in conference teams throughout the country:

Everyone else is hovering right around a push which pretty directly suggests their .500 record. Cal, on the other hand, is playing with fire.

So I’m actually really disappointed that I didn’t respond to an email from Drew Murawa asking the following Burning Question prior to the start of the second half of the conference season: Which team do you think will have the biggest change in performance between halves of Conference play? (NOTE: I’m pretty sure Drew worded it better than that but you’re all still with me here, right?) I was going to answer with ASU. I promise! They started the season with an awful four game stretch of at Arizona, Oregon road trip, hosting Utah. They averaged just 52 points per game during that stretch where they had to play three top-10 defenses. They’ve since upped that scoring to 74.6 per contest and so – as the Devils split in Washington – we must revisit a Herb classic following their first conference win (after that defensive gauntlet):

Before the season we said it could be a blessing or a curse if Joe Young was taking all of the shots. Interestingly enough, he’s only nominally increased his usage and shot rates (2014: 24.1% usage & 28.4% percentage vs. 2015: 26.3% & 29%) while unable to uphold last season’s insane 128.6 offensive rating (still a good 113). What’s perhaps not getting attention are his teammates. Dana has played deep into his bench for years – it’s his thing – and this year he hasn’t much of one. Seven different players play greater than 20 minutes per game and then Joseph plays all of the minutes. I’m not convinced this team is going to make the NCAA tournament happen, but if Dana can have some semblance of roster continuity, this team is going to be a force next year.

Got an email that said, “Who else sees UCLA going from an 11-seed to the Sweet 16?” It was a group email and I wrote back, “You’re not crazy. I can see it.” And then I looped this:

I want to take a little walk down memory lane. Get used to it because Arizona is retiring Jason Terry’s jersey this week so we might have a heavy nostalgia week. Alas, three Wildcats scored 17 or more points Sunday against Washington State: Brandon Ashley, Rondae Hollis-Jefferson, and Kaleb Tarczewski (yes that Kaleb whom every rails on except for the man behind this keyboard and I know that one game does not a player/season/career make but there’s a lot more to Zeus than he gets credit for and it’s too bad that credit only comes around when you can see it in just one column of the boxscore /end Tarczewski rant). I’m not sure the last time this triple scoring feat was accomplished but in 1998 Arizona had three players AVERAGE 17 points per game: Miles Simon (17.2), Mike Bibby (17.2), and Michael Dickerson (18). The aforementioned Terry scored 10.6 per game. That was fun.

Because the Pac-12 basically sucks, Utah is setting up to be a very interesting study of whether or not conference play matters. The Utes did a terrific job of challenging themselves in the non-conference but have since been let down by the rest of the conference. Seemingly no matter what average margin of victory the Utes maintain (26.3 points per 100 if you’ll recall the margins we described in our Cal section), I’m curious how conference ineptitude will, A) Harm the Utes come selection Sunday? and B) How two-and-a-half months of beating people by +26 might affect their March mettle? Don’t get me wrong, they’re great and I love that they’re so wildly balanced. I actually think their consistency bodes well for putting on the March blinders and just playing ball; not getting distracted by the bright lights and hoopla. But it’s still the Big Dance and people will be questioning Utah’s “toughness.” I don’t think I will and I’m still eyeballing 2/28.

One thought on “PacHoops Power Rankings: Bring Your ID to the Airport”