Wow, right for the jugular out of the gate. There was no nightmare scenario I could construct in October that would’ve come close to the dawning horror of this winter.  Even the most pessimistic of BuffNation would’ve guaranteed an NIT berth and a 6th-place finish in the Pac-12.  The reality is much, much worse.

The funny thing about this season is that everyone could see the flaws at the onset – no leadership on defense, no true point guard, a lack of outside shooting, etc – we as a fanbase all just dismissed it as a ‘Tad’ll fix ’em’ deal.  We had become wrapped up in success, and just trusted the system to continue, in some form, as we had seen before.  Outsiders too, as shown by CU’s 3rd place finish in the preseason media poll.  We all were taken in by the shiny object that is Tad’s heralded dome.

The injuries didn’t help.  At a time that CU needed as much consistency as they could muster, Coach Boyle was having to run out a different lineup each and every night.  I don’t think anyone was immune this season.  Freshman Dom Collier started the year out sidelined with a wrist, Josh Scott famously screwed up his back and missed a month, Xavier Johnson suffered the dreaded high ankle sprain, Jaron Hopkins had similar ankle issues, and Ski Booker succumbed to a pair of hip pointers (which I’ve always imagined as just someone pointing to your hip and saying, ‘wow, that looks like it hurts.’).  Throw in an uncharacteristic slew of suspensions, and you never knew who would be available in the opening weeks of conference play.

That’s just an excuse, however.  Really, this all comes down to a lack of leadership.  There’s too many guys looking for someone else to step up, rather than grabbing opportunity by the balls, and doing it right.  At the first sign of difficulty, especially on the road, this bunch folds like a card table.  By now, I think the team just expects something horrible to happen, and plays in a constant preparatory wince. Not a pretty sight.

The strength of Tad’s teams has always been defense. The Buffs rank 9th in the conference in effective defense. What’s up with that?

In back to back years the team lost their best defender – 2013 Andre Roberson, 2014 Spencer Dinwiddie.  I think they finally just got to a point where the loss of all that talent became a problem.  Don’t forget that the KenPom numbers in conference play this year are eerily similar to those in conference play last.  It makes sense, as the Buffs that finished last season are essentially identical to the bunch that is playing out the string now.

If you absolutely must point to something, look at defensive rebounding.  CU finished 6th nationally in defensive rate in ’13-’14, but are barely inside the top-60 this winter.  Tad’s whole system is based on defensive rebounding and shot-percentage defense. Without one of the pillars, the whole thing seems shaky.  And, think about it, Roberson was a rebounding machine, and Dinwiddie was a fantastic rebounder for a guard.  Throw in the injuries to the forwards, and the wound of their absence festers.

Some will point to perimeter defense, and it is a massive problem.  Statistically, however, it’s actually slightly better than it has been over the last few years.  When you play the pack-line, you’re going to give up some open looks, that’s why any weakness underneath is all the more painful.

Please caption this photo which is also your Twitter avatar and makes me want a single malt: 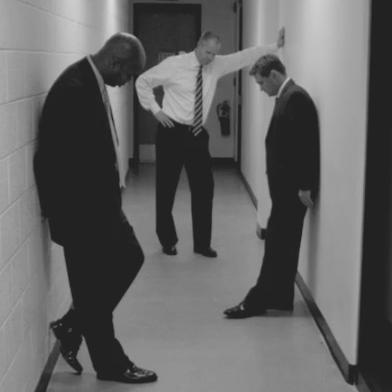 “Did we really just lock ourselves out of the locker room again?”

Askia Booker has been a polarizing guy, how will you remember him as a Colorado Buffalo?

This season aside, as a winner.  An entertaining winner.  No matter what he was doing on the court, he always had me watching with a smile. John McClane in Black and Gold; the sneering action hero fighting against seemingly insurmountable odds.

Honestly, one of the best players in school history.  I still don’t get why some CU fans are reluctant to embrace him, but it is what it is. I wrote a lot about it yesterday in my senior day retrospective, but I’ll hearken back to what I said back at the start of the year – I wish we had 12 more scholarship players just like him.

I know they’re back but are they back? Which is to say, are Josh Scott and Xavier Johnson 100% healthy?

Josh? Definitely not.  He’s still moving like an old man, and has been seen riding the bike on the sideline to keep the back loose during spells on the bench. The dude needs the offseason, bad.

Xavier?  Who knows at this point.  He’s having to take ‘medicine’ prior to each game, and certainly isn’t playing like ‘XJ.’ The same for Ski (hip pointers) and Jaron Hopkins (ankle).  Ski took a number of bumps on the LA swing (including an especially cheap one), and Jaron has been weirdly absent after a strong run in January.  With Xavier, however, I also can’t help but wonder where his head is at.

What’s on the horizon for CU? Gimme a run down of incoming talent (or otherwise) and a brief look at 2016.

I’m worried that we’re going to see a lot of the same.  There’s always the prospect of some unexpected attrition, but, as it stands now, only one scholarship player is graduating (Booker), and CU has yet to earn a commitment from a 2015 recruit.  They only have one scholarship to offer, but the last year has just been one long tease in the pursuit of anyone to take it.

So, what you see now, sans Ski, is a lot of what you’ll see next November, in terms of personnel.  There will be one major addition, however.  Josh Fortune, a former four star recruit from Providence is transferring in, and will be taking the sparkplug role in the backcourt.  Reports from practice are that he’s the real deal, so take from that what you will.

Farther out on the horizon, CU already has two commitments for the 2016 recruiting class – Deleon Brown from Grand Rapids, MI, and Cameron Slatterwhite from Gilbert, AZ.  Both are lanky guards in the Boyle mold with lots of upside.  Brown is actually graduating high school this spring as a 17 year old, but will be spending next season at a prep school.  He could always join the program early, but the prep route seems pretty locked in at this point.  Really, he probably needs the extra year of growth, physically and mentally.

Explain to us a scenario in which Colorado beats Arizona?

Well, it’s currently blizzarding outside, so maybe the Arizona flight is canceled, and they have to forfeit. Some other scenarios:

Other than that, it should be a UofA victory.

Is Donnie Veal (whom I beat twice in High School in head-to-head matchups and who would go on to be a 2nd round pick while I studied biology at UCSD) still on the Chicago White Sox?

Unless he changed the spelling of his name to J-e-f-f S-a-m-a-r-d-z-i-j-a, then no.  (I think he’s in the Braves organization now?)

Much like how to kiss a woman, that’s something every man must learn for themselves.

OK Tried to sneak that one past ya. You write a score prediction for every game. What’s your 2015 straight up and ATS record?

10-6, both straight up and ATS.  Giving opponents about an extra point per game.  Good enough to make some money, if I wagered, WHICH I DON’T, SINCE SPORTS GAMBLING IS ILLEGAL IN COLORADO.

Unless Ski pulls the magic he was conjuring in Tucson, it’ll look a lot like the game in Boulder last year.  I expect a 15-20 point final that is all but over by halftime.  It’s where the team is at right now, unfortunately.