I’m ecstatic to be headed to HecEd for my first Washington-Arizona game. Allow me a litany of reasons: Some of my favorites are Seattlites; this is my favorite Macklemore song; I once brought a Husky (best friend) to the second row of the McKale Center (Cats by 17 if you were curious); I like coffee; the Kid’s kid catches passes for Arizona. All of which is to say that I’m bummed the Dawgs are struggling because I’d like to see HecEd (and whatever Airlines) on full tilt. The Dawg Pound is revered.

Alas, so too is Jack Follman. We’ve worked together on a multitude of AZ-UW pieces, he’s a contributor across the internets; most specifically: Pacific Takes. I had some questions for him to catch us up on all things Washington (five game losing streak), Seattle, and this rivalry.

I’m going to Seattle. What must I do to capture the entire University of Washington basketball experience?

Hmm, tough since Washington basketball is pretty far down the list of essential Seattle things, but you can have a pretty good overall Seattle basketball experience. Go to the Seattle Center to see the Space Needle and the ghost of the Sonics at the Key Arena. Hit up Oskar’s Kitchen for a few beers since you should want to be heavily hydrated for a game that might not be that exciting. Why Oskar’s? Simply because it is owned by Shawn Kemp Sr. and there is a decent chance you will see a Seattle basketball legend just hanging out before the game. Then, have some more beers near campus and check out the game and keep an eye out for Jamal Crawford. I know that it is the middle of the NBA season, but I don’t think I have been to a Seattle basketball event without seeing him.

So we can be quick to note the Washington has struggled following the dismissal of Robert Upshaw. That’s kind of obvious considering he was so dynamic. But perhaps under the radar has been the fact that Jernard Jarreau has been missing as well. What’s his status?

Jarreau had surgery about a month ago and the word was that he would be out 4-6 weeks so maybe he could be back for the very end of Pac-12 play and the tournament. However, I wouldn’t be shocked if they sit him for the rest of the season with how big of a lost cause it has become in hopes that he can come back 100 percent next year.

In the absence of these two bigs, how have the Huskies at least tried to adjust?

It seems to me that the Huskies have tried to play a little more small ball, take more outside shots and run a little bit more. Kind of going back more to what you would usually see in a Lorenzo Romar, guard-heavy scheme. Unfortunately, outside of Nigel Williams-Goss, I just don’t know if they have the talent or depth at guard to win many games in this scheme.

Can multi-guard basketball be successful in a high-post offense?

Are there any plans to Ouija Board Antoine Tyler into the game?

That would be a godsend, but even with Tyler’s skills I think Washington still drop the game by five, but maybe not if they can bring in Kenny Tyler, Malik Major and the 90s basketball movie cliched big Eastern European guy.

Before conference play, I said Washington basketball – the program’s progress and momentum – was one of 12 critical things to watch. Well I’ve been watching and they’re 3-8. What’s the health of this program? Are there warm seats?

Not good and while the dismissal of Upshaw officially sank the season, I think it was quietly going down the tubes anyways as the Huskies had lost five out of eight before the dismissal anyways including an embarrassing home loss to Stony Brooks, a home loss to WSU and an absolute thrashing by Utah.
It is tough with Romar right now. I see it as very similar to the Mike Riley situation at Oregon State in football or maybe Ernie Kent at the end of his run at Oregon. Romar is Washington basketball and the program was a mess before him. People really want him to be the one who gets them back going again, but the program clearly seems to be in a rut and the glory years of the Romar era are further in the past than it might seem. I think he is heading towards  the hot seat, but an excellent 2015 recruiting class is helping keep him away from that seat for a little while longer.

Nigel Williams-Goss flirted with leaving for the NBA. Is this still a possibility? What’s the strength of his game?

The NBA is still a possibility, but I would not bet on it right now. I think he comes back for at least another year. He is a great pure point guard with excellent size that can distribute while also hitting mid-range shots and floaters. 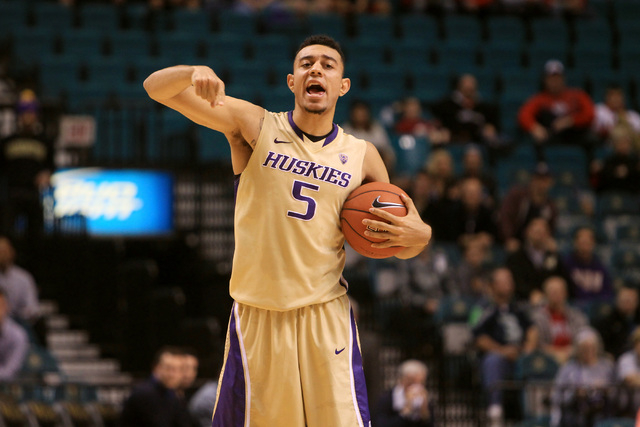 I’m a huge fan of seniors and Shawn Kemp Jr. has had a great senior year. Tell me about what he’s perhaps meant to this team and program and what he’s done better this season besides just be better (career highs – by a wide margin – in basically everything)?

To me the biggest thing is that he appears to be as fully recovered as he could get from Graves Disease, which he was diagnosed with over a year ago. His health simply makes him look like a different player this season.

Now it’s time to call a Spade a Spade: This isn’t the most intriguing game. But there is history to this rivalry. I want you to pick a starting five plus a sixth man off of Arizona teams during the LoRo era (2003-present).

It’s been almost 3-years to the day (Feb 18, 2012) since Washington last beat Arizona. Can Friday be the night to reverse that?