When it comes to fandom, sports understanding, and humanity, you don’t have to follow a blue blood program to know a sport. Jeff Nusser does hoops. He does far more (better) than HOTTAKES for the power site he co-founded, the fantastic WSU blog, CougCenter.

And so he’s a fan of a program in change while he watches golden boy, Tony Bennett, dominate the ACC from across the country. Yet we must look forward and in doing such we find Arizona looming on the eve of President’s day (worth noting: growing up in Tucson we got Rodeo Break, not President’s Day. Fact). Cougars versus Cats and Jeff kindly and witfully catches us up on all things crimson and grey.

Months ago, before nary an Ernie Kent game was coached, you seemed less than optimistic surrounding his summer on the recruiting circuit. We’ve now got a little time under our belts, how are you feeling about Ernie the recruiter?

The jury is still out. I’ve been working on a piece that I haven’t quite finished and published, but the gist is this: His good teams at Oregon had multiple experienced top 100 recruits on them, but his worst teams were the ones that were devoid of that kind of talent. That’s not to say he can’t win without them at WSU — no coach is a slave to his past — but history suggests it will be a struggle if he’s not able to lure some top-notch talent to Pullman. And the guys he’s landed in his first two classes not only aren’t top 100 guys … they’re not even fringe top 100 guys. Upon his hire, Kent insisted his recruiting ties were as strong as ever. That doesn’t appear to be the case. Perhaps he just needs some time to reacquaint himself with the slimeballs, er, coaches on the grassroots circuit.

What about Ernie the coach?

I’ve been much more impressed than I imagined I’d be. As a longtime Pac-10/12 fan, I thought I’d seen enough of Kent to have a good handle on what he could do. But watching him up close, I have a better appreciation for what he can do. The smile, the over-the-top positivity that was on display when he was broadcasting … it’s legit. And it’s exactly what this team needed after the death march that was Ken Bone’s final season. He’s made basketball fun again for those guys, both psychologically and stylistically.

They’re playing the uptempo, early offense system he was known for, and it’s allowed the Cougs to pick up some wins that seemed nearly impossible heading into the season (Stanford, Oregon, Washington … before we knew the Huskies were what they are). They don’t play a lick of defense — now that’s something familiar — but they’ve made enough improvements on offense to be competitive and interesting. And after the past couple of seasons, merely being interesting and aesthetically pleasing again is a welcome development. 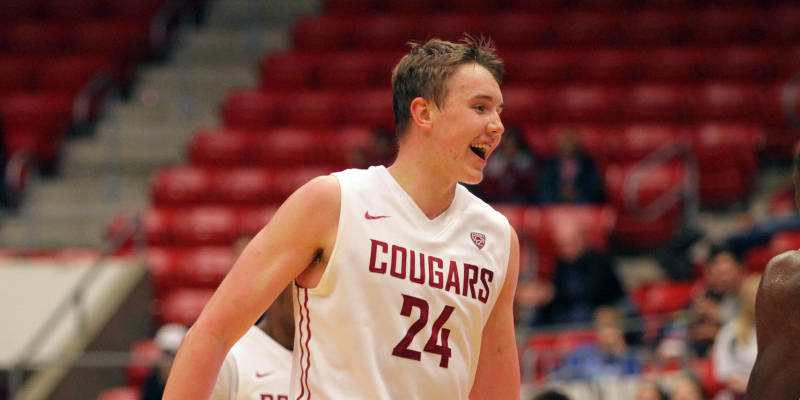 IT’S THE SWEETEST BOY IN THE PAC-12

Josh Hawkinson is becoming one of my favorite under-the-radar-players in the conference. Did you see this coming?

Of course not. His parents probably didn’t. But I will say this: Bone was high on him as a recruit — unheralded as he was — and when I watched his high school video, I could see why. He had soft hands, pretty good feet, and a nice face-up game. He lacked obvious Pac-12 “athleticism,” but there were some really nice tools there. And though his freshman season didn’t impress those who looked at his raw numbers, his rate-based stats revealed him to be an impressive rebounder. It was unclear how it would hold up over starter’s minutes, but it clearly has. I think he’s wearing down a bit right now, and he certainly needs to add strength to his frame to realize his full potential, but getting two more years of him is an exciting proposition. Who knows? By the time graduates, he might not look like he’s still in high school!

I don’t know if this is a question but I always appreciate your tweets/comments on results-based analysis. Thank you. Feel free to comment as you desire.

If my team’s results were consistently positive, I’d probably be more focused on results than process. Alas!

When Klay erupted a few weeks back, this was what you said:

WHY DO SOME HIGH SCHOOL STUDENTS WRITE IN 4-PT FONT???

Whoops! That was the wrong tweet. You said this about, Klay:

One of the great joys of my life is watching @KlayThompson play at WSU. Brings me so much joy to watch him succeed in the NBA.

For a singular moment, it’s this: 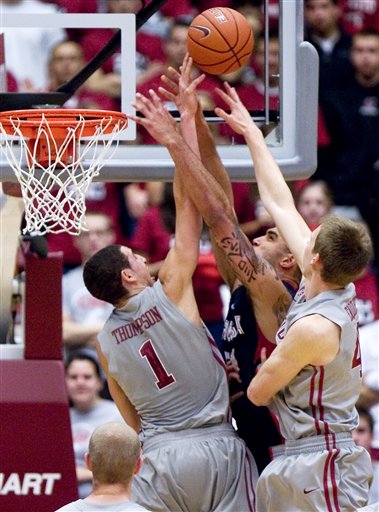 That was from a 24-point, 7-steal, 6-assist, 6-rebound performance — which also included one magnificent block of Robert Sacre — in an 81-59 beatdown of Gonzaga in December 2010 that broke a two-game losing streak to the Zags. (A two-game losing streak — those were the days!) A close second was the 43 points he dropped on Washington in the Pac-12 tournament. He hit 8-of-14 threes … in a two-point loss. Needing a win to keep their NCAA tournament hopes alive, the Cougs couldn’t make 43 stinking points stand up because they gave up 57 points in the second half. It was pretty much the perfect representation of his WSU career.

Last these two squared off (Arizona and WSU) the Cougars managed just 25 points. Can the Cougars surpass that mark?

SO FUNNY ADAM. You’re joking, but if this was an honest question, I’d answer it thusly: This is a much, much better offensive team than the one that struggled so mightily last season. For one, DaVonte Lacy is playing this time around. Second, the game is in Pullman. And third, independent of all that, pace alone is going to dictate a higher total.

Does Ernie’s team have a chance Sunday night?

Frankly, I’ll be stunned if the game is competitive, as the Cougars have struggled to score against disciplined defenses. Arizona is going to have a lot of fun running up and down the floor and scoring at will. I’m thinking something like 90-65, Wildcats.