Thursday night’s affair in Palo Alto. UCLA @ Stanford is a grudge match that previously saw UCLA snap a vicious five-game skid in two overtimes. If you’ll recall, Chasson Randle (who shoots 89% from the line) missed the second of two free-throws at the end of the first overtime. UCLA would win. So while I prefaced this week with doom-and-gloom and turned it to optimism, it’s worth noting that Stanford still has legitimate tournament aspirations. In order to do such they’ll need to be #TakingCareOfBusinessAtHome. Can UCLA be disruptive to that task? I know they have the skills to do it. They’ve proven as much but they’re also just 1-4 on the road this conference season. Maples isn’t exactly the toughest road game, but for UCLA it’s a road game nonetheless.

I’m not going anywhere near Thursday’s 8pm tip featuring USC @ Cal. Actually, I said that wrong. I’ll technically be closer to that game than any other game played. It’s in Berkeley. I’m 35-public-transport minutes from Haas. But I also can’t really justify watching these two teams play on my precious time.

Everyone? I suppose that because there aren’t any rallying cries to get additional teams into the NCAA tournament, the major battle lines are for a Top-4 finish in the conference. Trust me, Wednesday to Saturday in Vegas is way too long. Earning the first round bye is huge. So let’s quick look at what fourth place looks like:

Well that was a fun exercise. In choosing one, I’d like to note the Oregon Ducks. Earlier this week I wrote that the Ducks haven’t really stood out. For better or worse, they’ve just existed. They have a great opportunity to hold court at home against a re-identifying Washington team and what will likely be an emotional Ernie Kent return to Eugene. They’re one of the teams currently in fourth and while five of their final nine are roadies, they’re done with Arizona and host Utah. They’re work’s set out for them, but it could be lining up well.

I reckon the theme of this week has been that all is lost. That only Arizona and Utah – with Stanford scratching and clawing – are set in the NCAA Tournament. Does that mean the Stanford Cardinal are the team with the most to lose? I think it has to be. They play inferior competition – albeit the GotW – at home and should sweep the weekend. As we know, the Cardinal don’t handle “should” very well (see exhibits Dayton, 2014 S16 & Career, J. Dawkins). A home loss at any point the rest of the way would be crippling to Stanford’s At Large chances as both Texas and UConn are falling apart (combined 4-8 last 12)

Sometimes, when the conference you love just isn’t providing anything to love, you go to the Love Well (but I agree with almost none of her picks): 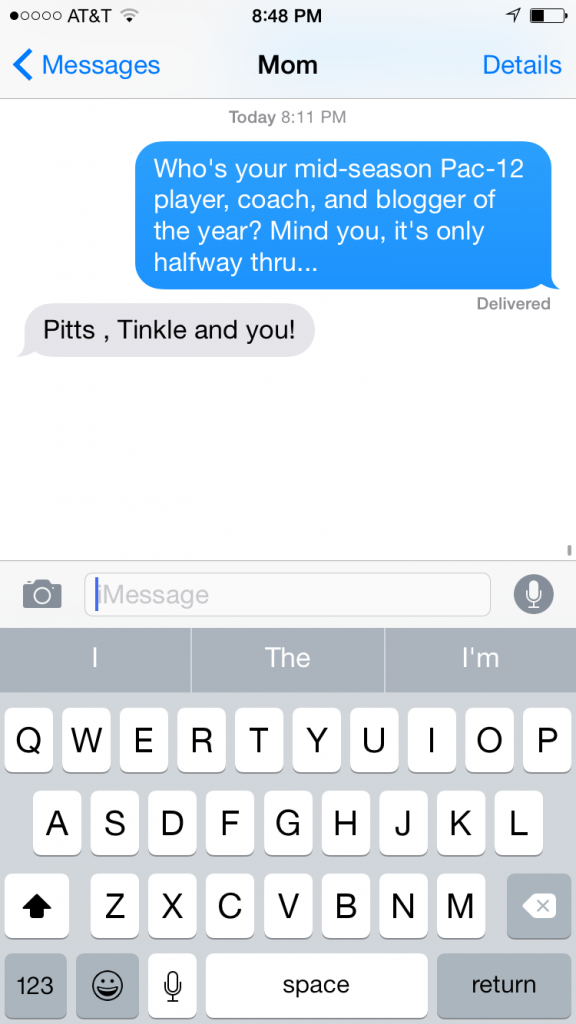