Allow me to make a mountain out of a mole-scrimmage. As a rule, we shouldn’t read into scrimmages. They’re for entertainment purposes, a means to generate hype around the team, program, and season. I’m not talking about the “secret scrimmages” sealed as tight as a government drone policy. But I can’t help being shocked that in Stanford’s brief (20-minute) Cardinal vs. White scrimmage, one team managed to outscore the other by sixteen. I confess, this is nothing to be startled over. But the final score was 40-24 and it made sense but it didn’t. Like how do you evenly split your team into a blow out? Or why not pause and mix things up to allow for even play? It’s your scrimmage. Like I said, this is admittedly making a mountain out of a molehill but it just seems odd. Arizona’s Red-Blue game yielded an 8-point scoring difference, Cal’s was 3…in three overtimes. Of course Oregon State’s scrimmage was a 77-54 blowout (NOTE: the Beavers never scored 77 points in a Pac-12 game last season) so who really knows. But because the conversation of Stanford basketball has often been player development, I’m curious who’s learning from such a game? This type of competition? Of course I didn’t see the game and – by rule – we’re not to make anything of it. But this feels fittingly familiar for the least familiar Stanford team we’ve seen in awhile. Gone is the “core” that won two NIT titles and beat Kansas. Is that Stanford basketball? It might be. But this year really doesn’t project to anything “special” which at this point at Stanford is an 18-11 regular season, .500 ball in conference, and a strange post-season (but a post-season nonetheless I suppose).

*turn on the new Adele album to read the following sections

I just don’t really love them but I’ll dive into that later (see: I hate them, Why).

Once again the Cardinal have a nice roster: it’s balanced with size, athleticism, experience and  a semblance of depth. They have a big who will stretch the floor (Rosco Allen), a guard that will defend (Robert Cartwright), muscle that will bang (Reid Travis), a slasher with size (Marcus Allen) and a plethora of talent to fill in behind that. It’s the same thing every year: fine roster, fine results. There is no next level. But in some regards, this feels like a fresh start. Gone are the many of the core players we’ve disappointingly ridden for a few campaigns now. But Travis was shorted a year due to injuries. Allen, Rosco has effectively been a rotation player yet has demonstrated promise. It’s unfortunate to write that Allen, Marcus is going to miss significant time due to a foot injury. Scouting Stars and small sample sizes suggest there’s once again talent inside Maples with the most promising part being we just don’t know. Maybe Dorian Pickens is the next Anthony Brown!?

A few years ago – when Stanford won the NIT – I looked into how NIT success might translate into future success (and for the life of me I can’t find the post). In that study I found that (and I paraphrase) most teams who won the NIT went on to pretty immediate success the next season (read: NCAA tournament). In 2012, the Cardinal won the NIT and followed that with a disappointing 18-12 campaign despite returning about 90% of that NIT winning roster. They did not improve. Now much of that roster would go on to win a Sweet 16 and follow that with another NIT championship this past season. But why – give me a reason – should we believe the Cardinal can improve on a 24-13, 9-9, sixth place finish after losing Randle, Brown, and Nastic? And I won’t be the curmudgeon yelling at you for meddling on my lawn; but, subsequently, attendance numbers for Stanford basketball live on a graph that starts somewhere near the top left part of your page and heads towards the bottom right. Furthermore, Johnny’s not the only Dookie in the Pac-12 anymore. Welcome, Bobby! 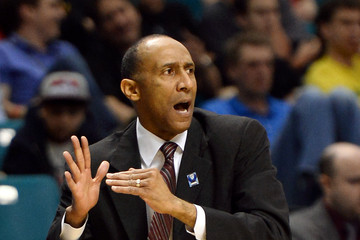 Stat you must know: 3rd

Highest Pac-12 finish in Johnny Dawkins’ tenure at Stanford. And that’s really not bad -it is in fact good – when you consider 23 of the last 30 Pac-12 champions have been either Arizona or UCLA. It’s been tough to get up in there. But now consider that their 2014 3rd place finish was through a five way tiebreaker amongst 10-8 teams. Their best conference record in this era has been 10-8 which they’ve accomplished twice earning them 3rd (previously mentioned) and 7th.

Not a ton but some has been made of this 30-second shot clock. It was piloted at the 2015 NIT… which Stanford won! So I asked Rosco Allen if he noticed anything about it:

Not so much, because neither team really pressed the ball. When you press on defense, then it might make a difference because now after the 10 seconds goes down on the backcourt, you only have 20 seconds left as opposed to 25, so that’s the only real difference I saw.

So many good basketball things happen in Pauley Pavilion. Allen comes back sooner than expected, Reid Travis makes a run at Pac-12 POY (14/9/3) while Rosco Allen handily wins most improved (13/5/3). In other words: PLAYER DEVELOPMENT! They make the NCAA tournament and the kind man I talked to for an hour on a flight from O’Hare to SFO re-purchases his season tickets to Cardinal MBB he cancelled this season in protest of team leadership.

The ticket boycott is validated as Stanford struggles and Dawkins even experiments by traveling with only the scrimmage-dominant Cardinal team. That fails. Marcus Allen’s rehab goes exceptionally well but during that process he decides to joining the hords of Stanford students dropping out to start companies. He partners with his doctor to start RHBLT, a company aiming to change the world through cloud based application of mobility integrated data models for foot rehabilitation. They have seed and angel funding from Chris Sacca, Jeff Clavier, and…Johnny Dawkins. Needless to say, they do not win their third National Invitational Tournament.

One thought on “2015-16 Stanford Basketball Preview: The same but the same”