“Well, that quote was from two and a half years ago off the record in practice when I was making a point. It wasn’t intended to be any disrespect to anyone else. So the fact that you bring that up, I forgot about that.”

And you know exactly who said that and what quote he’s talking about (except for my mom who says reading what I write is like a foreign language to her). But as reminder, that was our presser winning Trojan head coach, Andy Enfield!, being brash and arrogant just like the Trojans grow ‘em. And we haven’t heard much from him since. Which I suppose is a good thing. You can’t do much chest bumping and mouth running when you’ve only ever won six Pac-12 games. Furthermore, he’s currently BMOC as the football coaching situation is what it is. Andy Enfield is the most stable thing USC has right now. And yet we’re still not convinced of what he’s capable of doing. Is he out of his weight class? Or was the cupboard just that bare when he inherited Kevin O’Neil’s Trojans (yes, yes it was)? Rebuilding generally takes about four seasons. By recruiting measures, Enfield appears to be tracking quite well. The concern lies in 23 total wins and no signature victory. But maybe I’m not giving enough value to their first round Pac-12 tournament win (the classic 12/5 upset) last season. Of course beating ASU has rarely been the projection point for a basketball programs, but in the midst of rebuilding, you’ll take what you can get.

Their backcourt. Or at least their backcourt with Katin Reinhart playing that NBA volume shooting veteran off the bench. Enfield took to not starting the former UNLV Rebel which led to the emergence of Juju Jacobs and Elijah Stewart. Take, for example, their upset of ASU. The tandem combined for 39 points (27 from Stewart), taking 57% of the team’s shots while sitting just a combined four minutes. Reinhart, meanwhile, played an effective 24 minutes and made 4 of his 6 shots. That was the future of USC basketball and it now adds a healthy Jordan McLaughlin. In the front court, I’ve long been a fan of Nicola Jovanovic. Last season his offensive numbers didn’t spike as I thought they might’ve, but he’s proven an effective rebounder and defender, a side of the floor the Trojans have struggled on. He’ll be joined by incoming freshman, Bennie Boatright, who can evidently stroke it for a 6’10” big.

History. Facts. Reality. Everything by which one bases prognostication. Those are actually strong words but I can’t shake the fact that in two years this program has won only 6 conference games. Enfield has been quick to say that they’ve lost some close ones (8 losses came by 5-or-less points and a 9th game went to overtime) but then there’s also the game in which they scored just 39 points in a home game or five losses by 20+ or the two year aggregate score of 356-454 (0-5) against UCLA. Things can look nice on paper, there can be an entire galaxy of stars on the recruiting pages, but it is six conference wins right now and that cannot be overlooked. We haven’t seen marked improvement year-over-year the way one might hope to see or as has been the case with other coaching staffs. 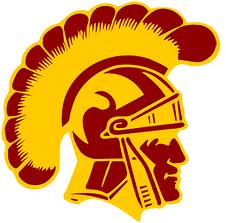 As noted in our intro, Andy Enfield had forgotten about his “play for UCLA” quote. Still hasn’t beat ‘em.

The stars align (that’s a recruiting joke)! Jordan McLaughlin, with two shoulders, spearheads Dunk City like it’s March 2013. Boatright and Jacobs are stars. Enfield is so high from November home wins over USD, Monmouth, New Mexico, and CSUN that he tells Haden, I got this, puts Helton back to coordinator and beats UCLA on 11/27 as the football coach. Enfield is then hired as the first ever (that we know of) dual revenue sport coach, leading the Trojan empire to heights only Hector had built.

I can’t see a scenario where this team replicates it’s last two seasons. Theoretically, there are too many good pieces to the roster. Is that they hype? Is it the coaching? There are actual upperclassmen on this roster now – how bad could it be? Bad. Katin Reinhart becomes the collegiate version of Nick Young, channeling the former Trojan’s brash nature and female aptitude. In other words: a complete distraction. Jacobs and Stewart don’t progress. Having worked 6-months in a PT clinic, I understand that recovering from shoulder surgery is miserable; Jordan McLaughlin’s shoulder hasn’t recovered. They improve their win total by one for the third consecutive year. Pat Haden hires his daughter as a basketball consultant.