Because, of course, the contests themselves are never enough. There must be narrative beyond ball-in-hoop. The monster must eat.

Sean Miller loves to thank his fans (‘preciate it, Coach!). Without failure there’s a “best fans” and “McKale Hyperbole” baked into each and every one of his media addresses. He’s a man who knows his audience. But his audience extends beyond the 14,545 adoring seats in McKale and the greater Tucson metropolitan area. Arizona Basketball is national. That’s a fact Sean Miller is sure of. A fact he fosters. When he speaks, those recorders and cameras have lots and lots of ears behind them. Those keyboards have lots and lots of eyeballs on them. Following Monday’s innocuous 90-60 defeat of Bradley, watch this escalate:

Miller is amazed at the emptiness of some arenas early in the year. Not naming names, but uh, he’s dropping some shade on a certain rival

School > Fans > Nation and the monster had his feed.  Even the Champions Classic couldn’t conjure greater takes than the presumed war of Western words and recruiting:

The highlight of the past 24 hours is still Sean Miller’s postgame press conference. STORY: https://t.co/3lgZmlpHbl

In hearing Miller’s calculated comments, it was clear that he wasn’t walking into the monster’s trap but rather whistling the beast close, patting him on the head and spoon feeding him a tasty morsel and a “gooooboy.” The monster rolled over for a belly rub.

Think about it, Miller was coming off an opening night game in which his 12th ranked Wildcats could only be streamed online. I watched from a phone. Then it was a 5pm PST Pac-12-Networks-limiting contest against Bradley. Meanwhile, Miller’s contemporaries were at the Champion’s Classic playing a made-for-TV event as the centerpieces of college basketball. There was Coach K, Cal, Izzo, and Bill glad-handing at the United Center while Sean was…lost in Larry Scott’s brainchild? Maryland and Georgetown played a game that was attended and live commentated by Michael Wilbon and Scott Von Pelt, two of ESPN’s highest paid talents. Are the Pac-12 Networks a failure? That’s a whole different topic.

Shade was thrown! UCLA was dissed!

And the Bruins are getting recruits. They have the 4th rated 2016 class. Inconsequently, they’re not getting audiences. You know who else doesn’t draw? LSU (50th nationally), Cal (54th), and Washington (78th). Those three schools had the 5th, 3rd, and 6th rated classes in 2015, respectively.

The beast’s perfect treat: Miller’s statement is both factual and flawed. 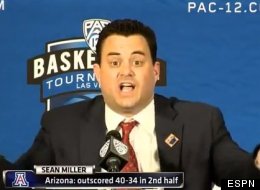 And what is the measurement of attention? Is it recruits? Fan attendance? Clicks, page views, impressions, subscriptions, form completions, mentions, likes, or purchases? In an age of hyper localized and personalized media, how we appeal to an audience can be very specific. The key to success in these endeavors is a complete and thorough understanding of audience.

I’ll leave you with this final thought: why would a coach who is often deflective of his team’s success and complimentary of his opponents (if not sarcastically) conjure positive attention to his team? A team that is amidst a rebuild (perhaps reload) after losing four starters and following a summer in which Miller called California a “title contender?”

Maybe, just maybe, Miller has learned he’s got a team better than even he thought?

3 thoughts on “Sean Miller has your attention: Of Monsters and Media”