A 2015-16 conversation of UCLA basketball has to start with Bryce Alford. I polled everyone I live with and the coach’s son was unanimously voted the most polarizing player in the conference. In the interest of data journalism, I should inform you that I live alone. But you know I’m not wrong. Put aside you daddy issues as I’m going to take the tried and true measure of high-browing your perceptions with arrogant data. Here’s some Bryce:

You might not like him but don’t let it could reality. And sure I’ve breezed over some of his flaws (most notably his goatee, shooting at the rim (14% total shots, 46FG% there), defensive efforts). Nevertheless, unless you’re reading in Tucson, Palo Alto or Salt Lake, he’s played in a weekend of the tournament you haven’t.

We’re sports fans and we love bravado, boldness, challenges. Try this on:

UCLA currently has the #1 strength of schedule according to KenPom (ok – that’s a joke as it hasn’t been updated and everyone is tied at #1). But it won’t be hard to imagine a world where that’s a reality. I question – but don’t fault – Steve Alford for this scheduling. What sort of roster expectations did he have for year 3? In year 3 at New Mexico he went 30-5, it was his best team. Was he expecting the same trajectory? This isn’t one of those fluke schedules where you catch a team amidst their cycles (i.e.. This is Kentucky, Carolina, and Gonzaga. They’re always good! And I’m not convinced Alford has the team to weather that storm. But it’s the kind of effort that is going to ultimately galvanize this program. Because I still don’t feel like this is Steve Alford’s UCLA. Neither of these successes in year’s one and two felt distinctly his. And don’t misquote me here – what he’s done at UCLA has been impressive in my eyes. His UCLA style of play fingerprint is nothing like what it was at Iowa or New Mexico. He’s adjusted to the roster he had..and gone to two Sweet Sixteens. And so now, as he builds his program around a nice class of guards (Aaron Holiday, Prince Ali) and experienced guards (Alford and Isaac Hamilton) with a front court of Tony Parker and the improving Thomas Welsh, this doesn’t seem like a half bad roster. Particularly if you’ve forgotten about Jonah Bolden. Here’s an excerpt from a Scout eval:

Bolden is a long and slender forward with pretty good athleticism who is a threat to shoot from the catch, can really pass it, rebounds well and plays hard. He’s going to have to get stronger and improve his handle.

You know what that sounds a lot like (note he’s listed at 6’10”)? Kevon Looney. He turned out to be a pretty good Bruin. And Bolden has had that year inside the system, to get stronger. From a starting perspective, there’s a nice core of experience on the floor for the Bruins to attack that hellacious schedule.

Last season, with probably a better roster, the Bruins lost each Top-100 KenPom, non-conference game they played. They suffered a five game losing streak over the holidays which included road losses to CU and Utah as well as that first half in Chicago against Kentucky (7-41). I suppose the silver lining (if not the point) is that it didn’t necessarily break them. But, the Pac-12 has only gotten better this year. A five game losing streak likely won’t be survivable. Because Tony Parker is likely exactly who he is. And while that’s a fine Pac-12 Center, he seems to leave more to be desired. I’m far from excited about Isaac Hamilton as a great option here (albeit nice to have ahead of the freshmen). There’s a lot of youth on this roster – 11 freshmen or sophomores – and it’s not like Alford has been bringing in Kentucky-esque classes. It’s not that I think this is a bad team, I just think everyone else around them got better. 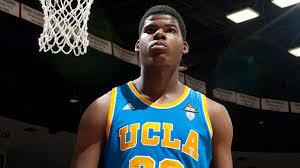 Points and rebounds by Tony Parker against Gonzaga in last season’s Sweet Sixteen loss. The Zags don’t give up double-doubles – Jahlil Okafor went for 9 & 8. Their frontcourt might be my favorite. And on the biggest stage, Tony Parker got his against the biggest kids. Now one game does not a trajectory make, and Tony’s thing has always been cyclical. But sometimes things happen in a senior season. You know the routine, you know coach, you know what to expect. When UCLA lost to Gonzaga in December of last season, Parker had 5 points and 9 rebounds. Three months later, while the Bruins still couldn’t quite pull off the upset, Parker went for that aforementioned 16 & 11. He knew what to expect. And he succeeded.

The ultimate self congratulations:

Another NCAA tournament! As noted, the SOS is there and Bryce is better than you’ll ever admit. And if you’re not going to give him credit, I know someone else who is: Pac-12 coaches! Bryce Alford is your 2015-16 Player of the Year (seriously, name me the candidate list and try to tell me that’s far off). He’s a born POY, after all. Naturally, Steve is Coach of the Year cementing Bryce’s place as the 2045 COY somewhere. All of that said, Bryce’s POY campaign won’t quite lead to what Steve’s 1987 campaign yielded: 30-4 and a national title.

One thought on “2015-16 UCLA Basketball Preview: Bryce is better than you”