Your weekly PacHoops Power Rankings debuts! In all honesty, this one is moderately-to-highly in depth. Let’s consider that this is our first power rankings so it’s kind of like capturing the previous 3 week’s information. Moving forward I can’t promise awesome data realizations or incredible anecdotes about my life as noted in our WSU blurb. The season is young, Stanford is already at .500, Bryce Alford is shooting 28% from distance, and how fly did your coach look in his Thanksgiving week polo?

In what I imagine is going to be a season of attrition for this top spot, the Ducks are here. They didn’t participate in a super sexy pre-season tournament, for them it was the “Global Sports Shootout” which wrapped things up, randomly, on Wednesday after covering all three weeks of hoop. It was highlighted (PUN 100% ABSOLUTELY INTENDED) by the Ducks’ win over Baylor during the Tip-off Marathon. Old news. So attrition earned them #1 in these “rankings” but that’s not because they aren’t good. Look – if you haven’t already – at Chris Boucher’s KenPom #s and a highlight. Also note that it’s pronounced like Bobby Boucher. Also note that this team is playing without Jordan Bell and Dylan Ennis. Attrition or sitting at their rightful spot?

Jakob Poeltl isn’t emerging as a Player of the Year candidate so much as he is asserting. The big Austrian rates 4th in the KPoy (KenPom’s Player of the Year) rankings. And for those of you not buying Utah as a top-3 team in this conference, what more do you need than a POY big with solid guard play to compete for a league title? Oh, right, guard play. Brandon Taylor and Isaiah Wright have offensive ratings of 82 and 73, respectively, following campaigns of 118 and 105. They’ll improve, but even in this past week against Idaho State (not good) the two combined for 6 assists and 6 turnovers. While Lorenzo Bonam has been great (114 Ortg on 19% usage), they’re going to need more out of those two.

We could chalk this odd weekendup up to the fact that Arizona never is successful in Anaheim (Elite 8 losses at the Honda Center in 1998, 2003, 2011, and 2014)…but Santa Clara clanking two free throws with 6.7 seconds remaining in a tie ball game didn’t happen at the Honda Center. That was at Cal State Fullerton’s Titan Gym. Yes, Arizona nearly suffered the worst loss of Sean Miller’s career (by KenPom rating, Santa Clara rates 225th while his previous worst loss was at Xavier in 2007 to the 213th rated Duquesne Dukes). Following that game a loss then seemed inevitable and Kris Dunn delivered, torching the Wildcats who seem to be missing a defensive stopper (Rondae Hollis-Jefferson?) as opposed to a certain 76ers point guard (TJ McConnell). In the DirecTV Wooden Legacy (that ironically aired at times on the Pac-12 Networks), Arizona gave up 44 to Jared Brownridge, 19 to Kris Dunn (in just 21 foul plagued minutes), and 17 to James Webb. This team wasn’t cursed by venue, they’re cursed with learning a rigorous defense and to play with one another – two learning curves that generally are pretty steep. Give this one time. 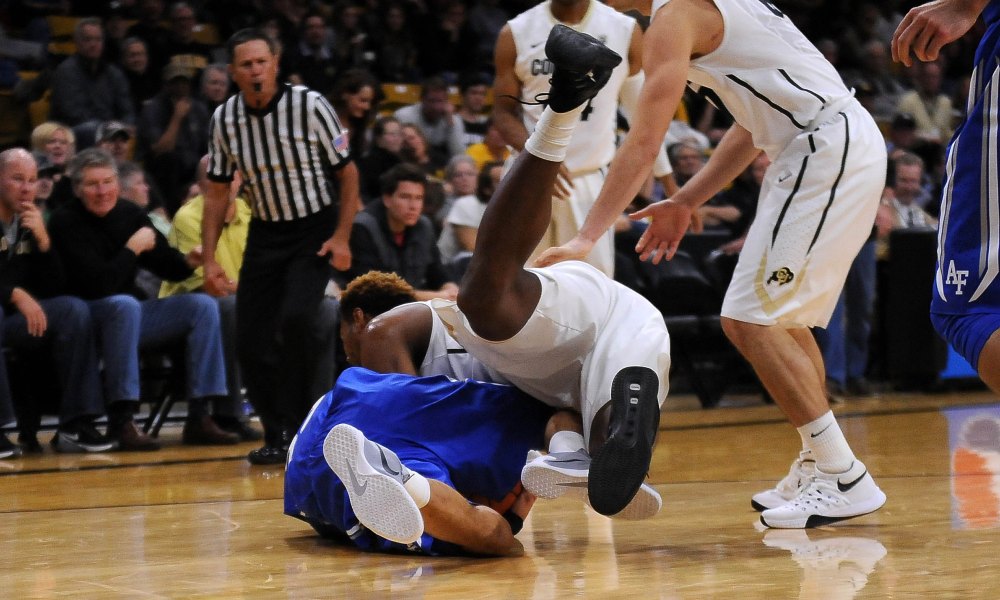 He bit another man. Let that digest for a second. Now we won’t dwell because that could deter from us recognizing how high we’re ranking the Buffs right now! Josh Scott is playing uber well and George King is currently taking shots at Askia Booker rates (31.1% shot rate).

I’m not soon going to say “I told you so” because even my arrogance (that has proclaimed myself the preeminent Pac-12 blogger) won’t stoop to those depths. It’s week f*cking three!! I will, however, point out that through their last 3 halves of basketball, the Cal defense has yielded greater than 1.30 points per possession to San Diego State (one half) and Richmond (the other two halves otherwise known as “a full game”). For a team that’s coached by a guy touting toughness and defensive accountability, those aren’t inspiring numbers.

Valparaiso was the first team to take what I think is the toughest Pac-12 road trip this season. The Crusaders played at Oregon and Oregon State last week, splitting the two games. Both were tightly contested. Neither of which I saw. With regards to the Beavers, I’m really just interested in that 12/12 game at Kansas.

You wish your bench was as cool as ours @MonmouthBench pic.twitter.com/0U0oe6WxSa

The bravado scheduling by Hurley is actually kind of making the Sun Devils look alright. They beat NC State (suck on that, Herb!) and played a very tough Brooklyn finals in a game that saw a single tear of pride fall down Coach K’s face: Hurley vs. Wojciechowski. The Sun Devils lost. In overtime.

Washington has played Texas twice and never on US soil. They’ve also now split those games. All of which is really a weird series of facts. It’s also weird that Gonzaga and Washington hadn’t played since 2007 (search everywhere else for the google maps breakdown of that phenomenon). The Huskies trip to the Bahamas can’t be considered a wild success but they’re young, presumably developing, taking the third swiftest offensive possessions in the country (13.6 seconds APL), and this:

They’ve played just four games, one of which was against Cal State Los Angeles which is a Division 2 school that we used to play in my playing days at UCSD. I once took the train straight outta compton (that’s a literal phrase not an album title in this scenario) from the Cal State LA game to my aunt and uncle’s in Hollywood for Passover dinner. True story.

We’re going to put these guys right here at the bottom as they take their annual multi-week break for finals or whatever it is “student-athletes” are supposed to be doing while the rest of us tune in to some great Saturday high-major match ups. Do you think Johnny will take his team to Levi’s for the Pac-12 Championship game?