Gabe York once dunked over a kid in a high school game. As York was an Arizona commit, I probably watched that moment on loop 1000 times. The poor kid had no idea it was coming. York elevated over the unsuspecting high schooler and made him poster material (although I think it’s time that we update the insult from posterized to Vined or Tubed or something more to the digital effect). Here it is but know that it’s a featured search result for “Gabe York dunk”

For Gabe York it’s been the moments. There’s always one and it’s an available narrative when it comes to college basketball. Gabe York is a showman and he seeks out the game’s biggest moments – the outcome in the balances and in need of something to tip the scale. It can be fun and it can be riveting and it can be infuriating.

York has been frustrating. Consider his moments at Cal, USC and Colorado. Three moments to capture a victory have yielded three mis-dribbles and three losses (the moment, for the record, does not define the loss it just headlines it). More broadly, his shooting efforts in losses at Utah, Colorado, and a slim victory at Washington read 14-47 (29%). Consider his missed dunk attempts, the effort to capture a hashtag and the subsequent blocked shots. Gabe York has frustrated, it’s undeniable.

But Gabe York fucking went for it.

He didn’t always succeed, he hasn’t always captured his moments. But he went for it and that’s something. For what are we but walking experiments of our own capabilities?

Gabe York went for it and inside Honda Center. Sean Miller dialed up his number in the Elite Eight. It was the waning moments and Gabe York was asked to curl off a screen, catch a pass for an elbow jumper, and connect on the shot. In 2014, Gabe York connected on 16% of those shot attempts. He curled, he caught, and he missed.

One year later it was the same team – Wisconsin – in the same game – the elite eight – and the same coach asked the same player to curl, catch, and connect. This time it was a three. This time he made it.

If you didn’t know, Arizona lost both games.

And now consider Gabe York’s Arizona career. He isn’t Kaleb Tarczewski and he isn’t TJ McConnell. He’s not Grant Jerrett or Stanley Johnson. He’s worn every hat the program could ask of him. He barely saw the floor as a pup, taking 32 shots the entire season. As a sophomore he was continuing to develop until he was thrust into the starting lineup of the best team in the country when Brandon Ashley broke his foot.

And then last year, his junior campaign. That was the role York was built to play: veteran shooter on a team built to attack the rim. Look at his 2015 3FG% and how it progressed with the season: 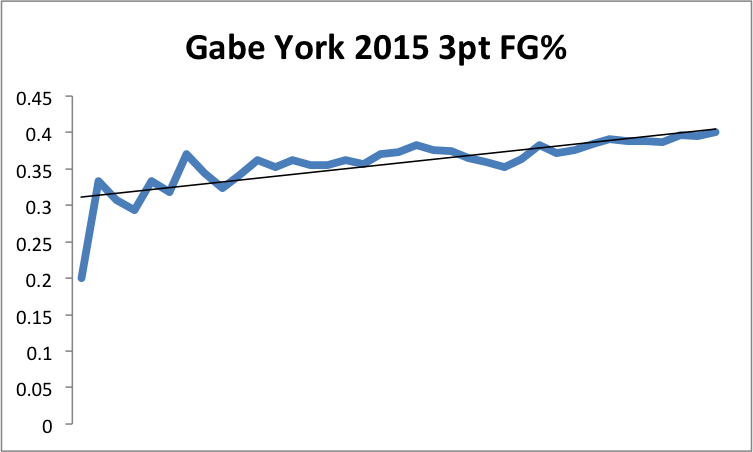 He just got better. He scored 19 as Ohio State packed the lane and 11 as we sought Badger revenge. He only got better. That season was the perfect role for Gabe and he was perfect in it. The mid-range jumper he missed at an 84% clip as a sophomore? The one he clanked in the elite eight? He made 50% of them as a junior.

I suppose this is the cool thing about senior day. We remember this isn’t a vacuum. That a career shouldn’t be defined by moments but by progress and process. Four years expands far beyond success and failure. A coach once told me you have to earn the opportunity to fail. We want is to celebrate success, a feeling we don’t quite get without the existence of failure.

York is going to join Tarczewski on Arizona’s Top-10 wins list and the juxtaposition is glorious. York of all his hats and Kaleb of his consistency. We appreciate Kaleb having played within the constricts of his coach’s rigid and disciplined system. Meanwhile, we appreciate York’s ability to break that mold, hit a shit-load of “noooooooooooooKAY” shots and capture a game’s biggest moments.

And it’s my sincere belief that despite how some of these waning moments have played out, Gabe will get one. He’s got a few weeks to do it and there’s hopefully enough McKale magic in the kid that it’s going to work.

Because we don’t get a story without a guy who goes for it.

And Gabe York – for better or worse – will fucking go for it.