The consistent joke about the Oregon roster was inconsistency. Last year it was no longer a joke. Dana returned 60% of his minutes and took his squad to the conference title, tournament title, and Elite Eight. They were the #1 seed in the West where they did what all great Pac-12 teams do in Anaheim.

And lament Dillon Brooks’ foot. At least not yet. The timetable is indefinite and foot injuries are tricky. But the blessing of depth is that you get to practice better and you can navigate injury. Further, in SI’s “What-If’” column, the absence of Brooks drops the Ducks all the way from fourth to…eighth.

And lament the loss of Elgin Cook and Dwayne Benjamin. Granted, I don’t like the narrative of player replacement – college basketball rosters are more art than Moneyball – but these were the versatile forwards that made the mysterious Duck zone work. Yes – Boucher is a uniquely gifted offensive player, as are Brooks, Tyler Dorsey, and the soon-to-be-reintroduced Dylan Ennis. Oregon teams, however, have rarely had a problem scoring. They’ve rated in the top-25 of offensive efficiency in four of Altman’s six seasons in Eugene. But what separated last season’s group was their defense and those versatile, long forwards. Consider that this team won’t have Brooks for a spell (the last of those versatile defenders) and the Ducks could have something of a learning curve on the defensive end.

Returning minutes on this roster (including Ennis).

Some think that this team is a Final Four contender only with Brooks. That feels extreme in that 1) I don’t see him missing the whole season, and 2) this is a really deep, good team. Absolutely their defense will be a work in progress. But this team has already endured a deep March run during which everyone doubted their seeding. Losing in Anaheim did not validate anyone who doubted their seeding. It proved to this group – that largely returns – that they belong on that seed line and they’ll want back on that seed line. For you Duck fans out there, it looks something like this: Sacramento, San Jose, Phoenix. If you don’t like travel, this is a good year to be a Duck fan. 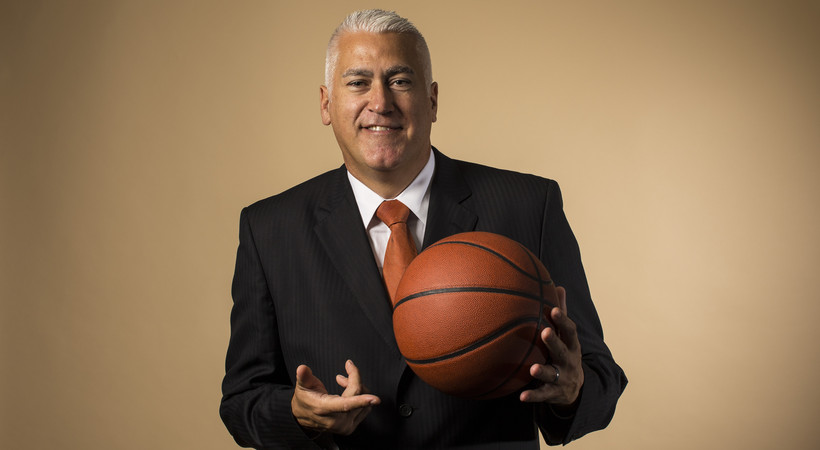 You can’t make this up: Oregon State, this season, adds a player named Ben Kone. On to your regularly scheduled preview.

The NCAA tournament had not hosted the Beavers since 1990. Then, last season, the Beavers danced! It was short lived and unfortunate the country couldn’t further enjoy the talents of Gary Payton II. I think, however, we’re all about to discover just how good he was (read: Corvallis void). But the full season, and year prior, led us to believe that the Beavers have become the latest P12 upstarts (after Colorado then Utah). They leveraged the sons of their coaching staff and pieced together a vastly improved offense from Tinkle’s inaugural campaign.

And keep asking how the Beavers will replace GP2? You don’t replace that.

And recognize that the Beaver offense improved by 12 points per 100 possessions across Tinkle’s first two seasons. Significant. They saw an influx of talent after that first campaign that they won’t quite match this year. But it’s worth observing that when they were thin on talent in 2015, they played effective (albeit sssslllloooowwww) team defense (17th nationally). They infused the roster with Tres Tinkle and Stephen Thompson and made the aforementioned leap (97 > 109). Obviously all teams aspire to a balance, but I’ll be curious how Tinkle optimizes this roster.

Possessions per game  – year over year – that the Beavers averaged. It will be interesting to see the direction of the OSU pace considering they lose perhaps the conference’s most electric player (on either side of the ball).

This is Wayne’s second most talented roster in his OSU tenure. Which really isn’t saying much when you consider what he had to work with in year one (recall, he started walk-ons). With a really shitty roster he won 17 games. With a young roster (and an NBA-level talent) he went to the school’s first NCAA tournament in a Millennial’s life. In a down Pac-12 season (this year), I’m very excited to see what kind of magic Wayne can conjure. And while we criticized Ernie for the lack of direction in his program, this one is clearly on the up no matter this season’s results (of course that’s barring complete implosion). They’ll introduce more 2017 talent with Thompson’s brother (a 4-star) while Tres and Stephen only project to improve. I don’t expect Oregon State to be fantastic this season, but they’re going to be competitive. And that’s a great thing.