They didn’t. Things started off with a loss to Monmouth which ultimately wound up hurting Monmouth perhaps more than it helped. The Hawks went 28-8 and played basically every high major around. They didn’t dance. But neither did UCLA! The Bruins would beat #1 Kentucky three weeks later but those Wildcats were eventually unranked. Steve’s squad would lose 10 of their final 15 including their final five straight. UCLA will start 2016-17 on a five game losing streak. They dropped all three of their games against USC by an average margin of 19. Last season was a really bad one in Westwood.

And linger on the letter. I already was that guy for us! I asked about the effect it has had on the program and Alford was predictably dismissive but not in a bad way. He addressed it such that it hasn’t been a focal point. It wasn’t something the players necessarily talked about and the kids didn’t really care about the money (returned $5.4M bonus). Well, let’s ask Nigel Hayes? I digress. Ultimately, I really appreciated this from Alford:

Consequences is a great word that I learned from Coach Knight. If you’re out of a stance, you don’t block out, you don’t think the game, you don’t move the ball, make the extra play, there are going to be consequences. You’re going to lose games because the victor always favors the team that makes the fewest mistakes. So I wanted our players to see those consequences when we as coaches don’t perform well. Whether it was giving back an extension or writing a letter to the fan base or just letting them know we care.

And consider that – while I don’t love that the Bruins got better at positions they didn’t necessarily need to get better at – they did get better. Lonzo Ball is the playmaking guard that allows Bryce to finally move off the ball (also – tangent time – don’t be that guy who harps on Bryce because he’s coach’s son. Do you realize Bryce played the most Pac-12 minutes last year with a pedestrian 22.3% usage? That was the 3rd highest usage on the team. He shot 37% from three and just 63% of those threes were assisted. To help, that’s a very good shooting percentage on a lot of threes he created himself (the ones that bother you). This year, Lonzo Ball is going to be assisting on a lot of Bryce threes. I’m going to guess Bryce shoots 43% from distance. Heard it here. And read this. Bryce is good; you just chose not to like him. /tangent). I’m concerned, to be clear, about the defense. It’s thrived on opportunism in part because their guards (BRYCE!) have been lacking defensively and because they could put a lengthy unique at the top of their zone (Anderson > Looney > Bolden). I won’t soon trust TJ Leaf up there and I don’t foresee Gyorgy Goloman being particularly successful either. That said, those two will be critical pieces to what was a thin front court (injuries) last season. I suppose I could go on but if you’re like me and picked UCLA 4th you should probably begin to regret that pick.

Percentage of returning minutes from last season’s 15-17 team. I repeat: What will change?

UCLA is going to be pretty good. Possibly damn good. Like a few other rosters they lack a traditional small forward for which Dillon Brooks will continue to thrive. But there are some very unique lineups Alford can roll out there. The Bruins, above all else, have depth, which lends itself to defense, the effort side of the ball. As I noted, I think Bryce shoots 43% from distance and Ball is an All-Conference performer. Isaac Hamilton probably stands to do the best amongst the lot as he’s the lone slasher (Prince Ali?) on this roster. Ball’s ability to create and shoot coupled with Bryce’s shooting will make things easy for Isaac. Of course I can’t get 600+ words into UCLA basketball without mentioning Tommy Welsh’s two-point jumper. Remember? I think he’s going to have to play somewhat more traditionally this year, a back to the basket big, as his and TJ Leaf’s skill sets parallel one another. If there’s a concern for these Bruins it’s that the interior could be soft. Rebounding could be an issue. So could the fact that they return 75% of the minutes that went 15-17. 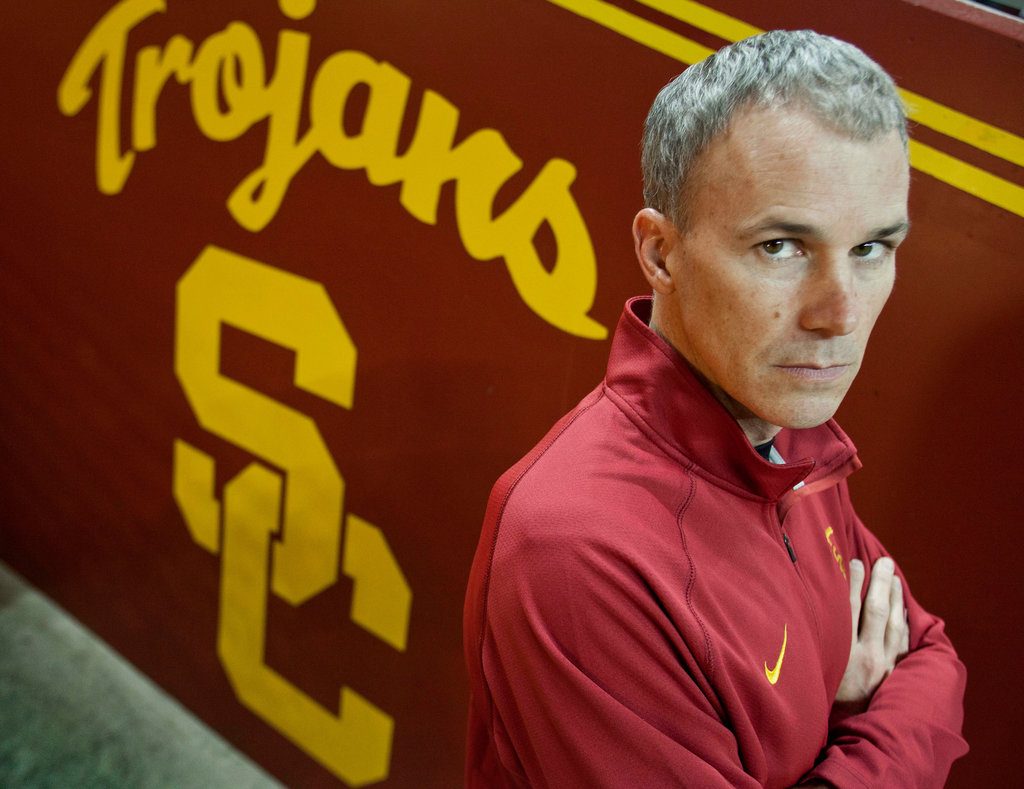 Julian Jacobs and Nikola Jovanovic were critical pieces to a team that made the 2016 NCAA tournament. They left the program. They were juniors. They were not drafted. But Andy Enfield is left with a roster that I like and reinforcements that I think are more than capable. Of course they’re all left to…Andy Enfield.

Last season on “Play slow over there”

The Trojans were the darlings of the Pac (country? Nah) and charged out to an 18-5 record. They’d notched a win over Wichita State and peaked at 21st in the polls. USC was a season early! They weren’t. Well they really were in that they made the NCAA tournament and swept UCLA by an average margin of 19 in three games. That’s legit. But what gives us pause was that after that 18-5 start, the Trojans wrapped up 2016 losing eight of their final eleven, crawling to a 21-13 finish. Again, not bad, but not where we allowed our imaginations to soar at 18-5 in early-Feb.

And poo-poo the Trojans because they lost two guys to the draft. Yes they declared and no they weren’t drafted. Enfield said all the right things at Media Day; that he’s not going to stand in the way of kids making a decision that’s going to be best for them (however the kid interprets that). Enfield embraces them as a part of the Trojan family. But just because they declared for greener pastures, doesn’t necessarily mean they leave a gapping hole (like, for example, Brown at Cal, Poeltl, the Washington pups, etc.). Scan the roster and you’ll agree. Or at least allow me to convince:

And celebrate Elijah Stewart. While Julian Jacobs led the team in assists, I believe Jordan McLaughlin has that position well filled. Where the Trojans will continue to thrive is in transition and Elijah Stewart is well poised to be the kind of wing-athlete that excels for Enfield. His efficiency sat at 117 last year, which would be amongst conference leaders. Except that he didn’t nearly qualify. He was used in just 15.7% of possessions (recall, high efficiency/low utilization suggests future success). I’m wildly high on Chimezie Metu and Bennie Boatright shot 36% from distance as a 6’10” freshman. McLaughlin shot 42% from deep. With increased minutes to Metu, I’d imagine a bump in defensive efficiency. The Trojans were 8th most efficient defense (otherwise read, inefficient) in Pac-12 play which is when that 3-8 spell began. They also welcome Shaqquan Aaron, a Louisville transfer and former 5-star prospect.

Progression of national rankings in percentage of shots at the rim for the Trojans. Remember dunk city? It’s what we raved about in the Enfield system. Well in his best season as a college coach (yes, last year was better than his best at FGCU), they took fewer shots at the rim and paralleled national numbers by taking an increased number of threes. And it was the right decision! The Trojans last year had the 20th best 3FG% in the nation.

I’m high on these Trojans. I recognize that I’m not as high on their coach as I am their talent but one of the two has got to win out, right? A classic, Johnny’s and Joes vs. X’s and O’s debate. It’s a really nice roster and this is that critical fourth year to a rebuild. Many of our recent Pac-12 rebuilds have seen tremendous third year success (find the chart in the WSU preview), year four is when the plan really comes to fruition (see: Krystkowiak, Larry). I expect to see the Trojans finish in the Top-5 (easily) and if Metu makes a significant leap, this could be a very dangerous squad.