It’s a unique juxtaposition as we hit the homestretch of the season and Lauri has looked less like a lottery pick and more like a Finnish freshman. Before earning this past week’s Player of the Week honors, during the previous five games, the sharp shooter had connected on a cool 27% of his shots. In earning the aforementioned award, the Finn shot 53% afield.

The drop off has been significant and lent itself to diagnostics. Was it Confidence? Trier’s return? Fatigue? The freshman wall?

As we prefer to quantify things at PacHoops, we won’t explore his confidence (Sean Miller said he’s plenty confident), Trier’s return (this may affect his volume opportunity but not his making abilities), or fatigue (I have a Synergy account not a SportsVu account). Which leaves us with the freshman wall.

To understand such, I looked at Lauri’s five-game rolling shooting percentage. I like to look at this number to gauge how “hot” or “cold” a player is by aggregating his season into five game glances. Thus far, here’s Lauri: 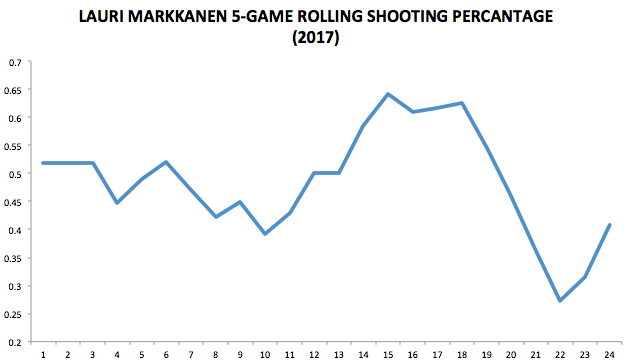 As you can see, Lauri had reached great heights around the middle of the season and maintained a very hot hand for a serious portion of the year. There’s a reason he’s being considered for the first pick in the draft. Consider, he’s a seven footer that has sustained greater than 60% shooting for eight games while making 26 threes.

So to understand Lauri’s case and the prospects of his return to mean (49%), I pieced the rolling 5 game shooting percentages of 20 loose comparables. It’s a cohort of one-and-dones, teammates and peers to help understand the burden and tribulations of being a phenomenal freshman.

While this is a limited study and doesn’t offer nearly the sample size we’d want to examine the actual freshman wall, what I found was statistically inconclusive yet encouraging. A glance at the cohort and their respective 5-game rolling FG% standard deviations:

As it were, the cohort had its highs and lows. Zach LaVine had the greatest variance, anchored by a streak of 74% shooting and a bottom of 19% (the lowest 5 game streak in the study). The most consistent freshman has been Markelle Fultz who also has the smallest sample size. Amongst freshmen with a full season’s data, Shabazz Mohammad was the most consistent; a standard deviation of just 4% – whereas he also had the sixth lowest FG% or mean.

But what does acquiring this information mean for Lauri Markkanen and the prospects of Arizona getting its star back? This weekend went a long way in answering that question but what might we learn from his comps?

Lauri’s struggles have been amongst the worst. Before this weekend he was sitting at the most standard deviations from mean (-2.51). The cohort had an average peak (height above  mean) 11 games into their careers. This makes sense as that’s right around the time non-conference play is wrapping up and the majority of inferior opponents have been consumed. Lauri’s, however, came later than any other freshman (20 games). The late peak is a unique indicator that a resurgence is due, but not guaranteed.

In looking at the comps who completed their freshmen campaigns, they finished an average of one half (-0.51) standard deviation below mean during their final five games. This suggests that Lauri, who’s well off his mean in the last handful of games, should regain his touch, but perhaps not at the levels we’d dream.

But Lauri Markkanen isn’t his peers. He’s being considered for the first pick in the draft because of his uniqueness. To quantify his uniqueness, we need look no further than his size (7-feet) and his ability to make the game’s most difficult (albeit high value) shot (46% – 55th nationally). He may be the best of that size to shoot that shot. Yet as the three is difficult to make as a 7-footer, a dunk or layup is presumably much easier. It is, in fact, a means to regain one’s scoring aptitude.

The season itself has a max of twelve games remaining for Lauri. Plenty of time for him to regain himself below the rim and then beyond the arc.