The Pac-12 has three top 10 teams for the first time since 1992. In that year, per Greg Hansen, none of those three went to the Final Four. It’s as if getting to the game’s greatest stage were difficult or something?

Dillon Brooks is shooting 56% from three across the Ducks’ last four games. Tyler Dorsey is shooting 50% from the same distance across the same four games. If you were curious Oregon’s missing link, it’s long been their ability to connect from the perimeter. For reasons lost to us, they Ducks simply weren’t shooting well for a long while. They are now.

Lauri Markkanen is shooting 27% from the field over his last five games. Before this cold streak he had been on a five game streak of 63%. Which Lauri plays across the next (and final) five?

Cal is a KenPom Top-50 team. That generally means (not a hard rule) they’ll make the NCAA tournament. Kudos! They’re also the worst rated offense amongst the KenPom Top-50 and play the nation’s 307th slowest tempo. Wins are indeed the greatest stat but Cal is not soon to win any aesthetics awards. 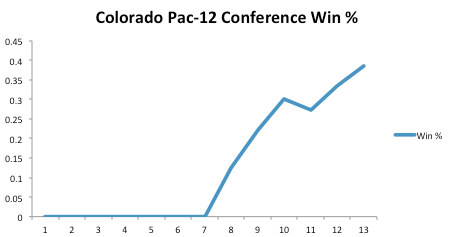 As graphs go, this is an auspicious one. And now allow yourself to wonder: What if they win in Eugene Saturday?

In conference play, Tra Holder is shooting 40/50/80 and while I know this shooting percentages game is usually 40/50/90, those are some ridiculous numbers for a 6’1″ guard playing the most minutes in the conference.

My Washington State preview concluded with this sentence:

I also believe they’ll notch a win over one team that finishes in the Top 3.

To date this hasn’t come to fruition but with the Top-3 all but locked in (Arizona, UCLA, and Oregon), the Cougars have two more chances: Arizona at home on Thursday and UCLA in Pauley on the season’s final day (3/4).

Before the season began, I wanted to know if the Huskies could get shots off faster than last year’s 13.6 second average possession length. They’re currently tracking behind (15.1 seconds) and the recent absence of Markelle Fultz hasn’t helped. The Dawgs played their two lowest possession games of the season without their lottery pick.

Rather than effuse on the Beavers’ nearing historic ineptitude, PODCAST: