For me, Media Day is about the experience. Larry Scott noted as much in his opening remarks, that it’s an opportunity for the student-athletes to do something they don’t necessarily always get to do. For Brandon Ashley, it was the chance to come home and answer to his mom. She asked the last question of the Power Forward, confirming that he was taking his vitamins and that he was ready for the season. You should’ve seen how Brandon beamed, smiled, and got embarrassed all at the same time. I call it 2015’s first shining moment. END_OF_DOCUMENT_TOKEN_TO_BE_REPLACED

Tomorrow, for the third straight year, I will be attending the Pac-12’s Basketball Media Day. Can’t wait. In all honesty, it’s a little boring. I love the opportunity to go but there are platitudes abound. More gets said by the Guilty Remnant.

The fun part is reading between the lines. Like knowing Andy Enfield ripped UCLA and hearing him have to then praise UCLA. Or listening to Bob Dibler discuss Ed Rush and trips to Cancun. Basically, nothing will be said tomorrow that shocks us.

But what if it didn’t play out that way?

I’ve scripted the questions I’d like to ask and provided what I think coaches will respond with and what I wish they’d respond with. END_OF_DOCUMENT_TOKEN_TO_BE_REPLACED

END_OF_DOCUMENT_TOKEN_TO_BE_REPLACED 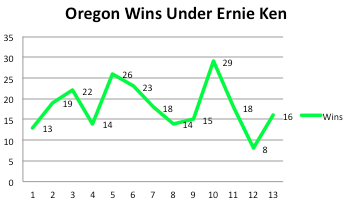 David Piper is the editor and founder of Addicted to Quack. He knows Duck sports inside and out and created the web’s top blog for following all things Oregon.

In the spring of 2010, coming off their second straight bottom two finish in the Pac-12, the Oregon Ducks fired their all-time winningest head coach, Ernie Kent. Oregon would take well over a month to name a successor, and in that time, transfer after transfer decimated the Oregon program. In all, five players left Oregon, with no incoming recruits having been signed as Dana Altman took over as head coach in April. Only one of the holdovers was an underclassmen. That player was E. J. Singler.

Singler committed to Oregon even as they were coming off a 2-16 conference season in 2008-09. The Oregon 6A player of the year at South Medford, he was more known for being Kyle’s little brother, although he has been a good player in his own right. He imprinted himself on the team right away, becoming a starter his freshman year, and earning a reputation as a guy who does a little bit of everything—shooting 45% from the field while finishing third on the team in rebounds and assits.

But it was after Altman took over that Singler really began to assert himself. The 2010-11 Ducks may have been one of the least talented Pac-12 squads ever assembled. The roster looked straight out of the bottom half of the Big Sky. Only two players, Singler and Joevan Catron, would sniff the floor on a team that was even halfway decent. But the team ran everything through E.J., who was second on the team in scoring, rebounding, and blocks, and somehow led the team to a 20 win season. More transfers ensued, leaving only two players from the Ernie Kent era still on the team two seasons after his departure.

This season, Singler is the lone remaining player from the Kent era, the lone four-year senior on the roster. In the most tumultuous time in Oregon history, a four-year stretch in which the Ducks fired their all-time winningest coach, opened a new arena after over 80 seasons at Mac Court, and saw 12 players transfer out of the Oregon program, E.J. has been our rock. He has been the one consistent thing about this program, the one face that has seen through the entire time of transition.

E.J.’s numbers are down across the board this season, as he has been battling a pretty bad case of knee tendonitis all year. However, he is still the unquestionable leader of the squad. Despite missing out on the conference title, he still likely has led this team to the NCAA Tournaement for the first time since 2008, and the program back to being respectable. The most anybody can do is hope to leave a place better than how they found it. E.J. is the one player over the last handful of seasons who has really left a lasting mark on Oregon basketball, and the program is in a much better place for it.