Yesterday I wrote about the Pac-12 POY race. I introduced some new names and addressed the progress of some of the serious contenders. I even explained why a few guys would have great years but won’t win the award.

Jahii Carson is going to win the Pac-12 POY award.

Maybe it’s the Holiday Egg Nog and the spirit of hyperbole in this jolly time of family, giving, and caring. A Happy Hanukkah Eve to you and yours. But Carson does things on a basketball court that the other kids can’t. Quickly with the numbers: He plays has scored or assisted on 46% of the Sun Devils’ made baskets. He’s 5’10” and he’s half their offense. And when he’s not on the floor:

Jahii Carson might be the most important player in country to his team. Arizona St has just 1 basket since he went out with his 2nd foul

Now I’ve already once mentioned hyperbole and I already made a prediction that he’d be the POY. We’re just 170 words into this party and that’s already transpired. But Carson is doing it. Doing everything. And on Monday night he did it again, leading ASU to their first win over a ranked opponent since January 8, 2010. One week after that win, in Tempe, I’d run my best Half-Marathon: 1:37:22. There’s no correlation between the two events, but note it has been a long time since ASU beat a ranked opponent.

Hell, with Jahii’s latest 23 point, 5 assist and >50% shooting effort, he made this happen:

You guys, I know Herb’s weird but that’s him doing what can only be described as a variation of the dirty bird – perhaps the unkempt fowl? – after a November win. November, not March. A home November win against a team that scored 35 points in a 40 minute basketball game.

Carson has people wildly excited about a program that’s had their coach on the hot seat for 2.5 years. As mentioned, it was the Devils’ first victory over a ranked opponent in 1418 days and even Buzz Williams might dance to that (though I doubt it).

I’m not going to dive into the stats on why Carson is so fantastic. You can already see and read and hear about that in a multitude of other places. Yesterday I asked Jeff Eisenberg if he thought we could put Carson in the National POY conversation. He wouldn’t bite but if the Devils start to become for real, rattle off a win against another ranked opponent this week in Creighton and garner themselves a top-25 ranking they can maintain, I say “Why no Jahii?”

But before we wrap this party, I’ll advocate for the Devil momentarily (I realize the irony in using that idiom here as any article that talks about how great an ASU student-athlete is intrinsically advocating for the Devil), he hasn’t won the big game just yet. He and the Devils have won just one top-25 game with the opportunity to do it again on Thursday.

I’ll be paying attention if I’m not in a turkey and pie coma. And everyone else should be, too. Maybe it’s the holiday hyperbole, but Jahii Carson is your Pac-12 POY.

I’m a big proponent of keeping local talent local around and so when Herb Sendek secured a commitment from Jahii Carson – and then much later received his NCAA clearance – it was a big. Huge for a program that went 12-19 the year before Carson enrolled and 10-21 the year he rode the pine. Once he saw the court, the Sun Devils were a bubble team right up until Vegas and finished 22-13. Need further proof that the kid’s a program changer? Carrick Felix’s ORtg without Jahii: 95.1. With Jahii? 110.4 and Felix was drafted by an National Basketball Association team. Maybe you’ve heard of that league. Jahii Carson changes lives.

Why I love them: Carson is the obvious reason to think highly of the Devils. He’s fully deserving of any print or voice he’s getting as an All-American. And have you been following any of these NCAA rules changes? Of course not. I did for whatever reason, however, and now allow me to synopsize with a quote from Bobby D (Pac-12 Coordinator of Officials):

“We are probably going to see more whistles than we have in the past.”

Well shit. And he quoted this in regards to hand checking rules and do you know who often draws the most hand checks? Riquickulous water bugs who blow by their defenders and already get to the line at a 42.4% clip. Expect the fastest guard in the conference, if not nation, to benefit from these rules changes. Of course Jahii is only 5’10” so he’s not always going to get a shot off. He’s gotta find someone to dish to, right? Enter Penn State graduate transfer, Jermaine Marshall. The numbers suggest that Marshall is a jump shooter – he took just 15% of his shots last year at the rim. Then, on all those shots he’s taking of the jumping variety, a high percentage of those are being assisted. Translation: Jermaine moves off the ball, gets open, hits shot. The off ball focus (also addressed by Bobby D) should behoove such a player as he runs around screens unimpeded by superfluous bumps and grabs. Between Jordan Bachynski on the block and Carson, Marshall should see plenty of open looks from the perimeter; a shot he’s proven he can make.

Stat you should know:

That’s the number of shots that Jordan Bachynski needs to block this season to become the Pac-12’s all-time leading shot blocker. He’s blocked 181 to this point – good for 11th in conference history. Last season the big Canadian dismissed 120 would be buckets. A repeat performance and he stands alone as the Prime Minister of Prevention.

“But we went through a period of time when we had more NBA draft picks than any conference in the country.  We were spitting out lottery picks like nickels … our talent level is as good as it has been in a long time.” – Hyperbole Herb on the health of Pac-12 hoops

Outlook: I think the Devils have some really nice pieces and a relatively balanced roster. They’ll introduce to us a pretty good fill-in for Carrick Felix when MSU transfer Brandan Kearney becomes available during the second semester. And with one of the nation’s best players, you really can’t count the Devils too far out of things. Hell, Matt Norlander picked them to finish third. I’m not that high on them but Herb has pieced together a pretty decent little ball club. This year it’s been noted that he’s sitting on a pretty warm seat for past performances (see: 2010-12) and we haven’t seen the Devil dance since James Harden donned the maroon and piss gold. Are they going to be good enough to dance? JAHII WILL DANCE IN HIS FINAL COLLEGE SEASON (I’m going to regret that later). For the first time in a long time, the Sun Devils are playing a non-conference slate that’s a touch better than cupcake (@UNLV, Marquette, Creighton) and, because, Jahii.

With the regular season now wrapped and the Pac-12′s seniors having played their final home games, we’re taking a tour across the conference and bidding this group of seniors farewell.

David Bowers is a freelance writer and general expert on the sporting scene across the state of Arizona. His work can be found on his own blog, DavidABowers.com and as a featured columnist at Bleacher Report and Best College Tailgate.

Arizona State’s Carrick Felix is the Pac-12’s Most Improved Player:

Carrick Felix entered his senior season with something to prove.

The hometown product from Millennium High School in Goodyear, Ariz., just west of Phoenix was not recruited to play Division I basketball after averaging 19.7 points and 13 rebounds per game in his high school career.

He signed with the College of Southern Idaho in 2008 and received a medical redshirt in his first season. The 2009-10 season saw Felix average 14.8 points and 4.7 rebounds per game at Southern Idaho and earned him a spot on the Sun Devils roster after the departure of standouts James Harden and Jeff Pendergraph.

Felix struggled to make an impact in the 2010-11 season, seeing action in 30 games, but only getting the start in eight. He averaged a mere 4.6 points and 1.5 rebounds per game. He shot a paltry 39-percent from the field and 20-percent from beyond the arc. The Sun Devils won 22 games that year but lost in the first round of the NIT, an embarrassing end to a promising season.

The 2011-12 season was an outright disaster for the Sun Devils. Their record of 10-21 was one of the worst in a long time and Carrick Felix was the second-leading scorer behind Trent Lockett. Felix’s 10.5 points and four boards per game were an improvement, but nowhere near what head coach Herb Sendek had hoped to see in the junior wing that started all but two games.

Felix graduated with a B.S. in Communications in the spring of 2012 and was accepted into the Master’s of Liberal Studies program in the summer. Heading into the 2012-13 season, there was a new attitude or swagger in Tempe. The freshman phenom, Jahii Carson was academically cleared to play and there were two new assistant coaches with NBA pedigrees in Eric Musselman and Larry Greer on the sidelines.

In two seasons at Arizona State, Felix averaged 7.5 points and 2.8 rebounds per game. He shot 41-percent from the field and 28-percent from three-point territory. He also had zero career double-doubles, this season, he recorded three in a one-week span.

Felix finished the season in the top 15 of six categories in the Pac-12 including No. 6 in steals and No. 7 in rebounds. His field-goal percentage jumped to 51-percent and his 3-point shooting improved to 36-percent. He started all 31 games and led the Devils in field goal percentage, three-point percentage, rebounds and steals. His 14.2 points and 34 blocks were second best on the team as well. He scored in double digits in 25 games this season and 20 or more in seven games including 22 in his final regular season game against rival Arizona.

The numbers are astounding and Felix was named to the second team All-Pac-12 as well as the exclusive Pac-12 All-Defense team with teammate Jordan Bachynski.

The 6’6”, 196 lb. guard/forward had a bumpy road to begin his college basketball career, but he peaked at the best time possible. If Felix does not get picked up in the 2013 NBA Draft, he has the talent and skill to play in Europe or the D-League to prove that he can play for the NBA and I am sure wherever he goes will be better that southern Idaho.

The glass has to be half full. It must with nary a game yet played. For such, over the next few days, I’ll be posting why each of the conference’s twelve teams have reasons to be optimistic. 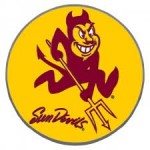