END_OF_DOCUMENT_TOKEN_TO_BE_REPLACED

I’ve made no bones about it: I am a University of Arizona Wildcats fan.

Have been since the day I was born and will be until the day I die. The McKale Center is Mecca; Lute Olson, god; Elliot, Kerr, Reeves, Stoudamire, Simon, Bibby, Dickerson, Terry, Gardner, Stoudamire, Budinger, disciples.

I love nothing more than attending a game at McKale, cheering on the ‘Cats amongst 14,000 fellow fans, rising to our feet as the game ebbs, screaming as the moment begs.

That said, some of my fondest Arizona memories are on the road. Traveling with a finite but dedicated group of Wildcat aficionados, proudly donning the Cardinal and Navy into hostile territory.

I’ve done this in arenas from New York to Los Angeles, seen blow out wins and blow out losses, made new friends and enemies. I even once got to watch UA hoops at noon and football at six, both live in Vegas, for my brother’s 22nd birthday.

Coach Miller, you’ve coached with and for Herb Sendek. Now, I was in Tempe two-years ago when you beat that school by 19 and I just want to know: was that as much fun for you as it was for me?

Miller of course had a very PC answer. Divulging very little of his fiery, competitive demeanor at an Arizona Athletics fundraiser hosted by the Bay Cats at San Francisco’s Olympic Club. I wrote about that great night in Tempe, read it here.

But the best game, the greatest moment on the road, was 2006 in San Diego.

I’d bought the tickets via SDSU the day they became open to the public – that is to say months in advance. Had I any foresight I would have swooped up the max allotment and made myself a pretty penny for a collegian. Alas, hindsight is always 20-20.

Attending the Chase Budinger homecoming would be my Dad, his best friend, and me, all coincidentally sitting next to the entire Budinger family along with a stadium full of Arizona fans (Zonies love San Diego and any excuse to get over there).

If you’ve never been to Viejas Arena at Aztec Bowl (formerly Cox Arena), it’s a scene. They have a raucous and famously crude student section (who like all San Diego sports fans really only show up when it’s a big game, if at all) and is designed in a deep, pit fashion. There are no seating rings to the arena, just vertical seating bearing down on the court. To summarize: loud.

At the time, Arizona was a team that rolled teams like the Aztecs and did just that – often heading to the bench to deafening “U-OF-A” chants, the game culminating with an Arizona victory, 69-48.

My mild mannered father and I were enjoying the game, commenting on Marcus Williams’ need to play consistently hard, Budinger’s upside, Jewann McClellan’s sneaky athleticism, and what Mustafa Shakur was supposed to become. On the road, with your team rolling an inferior opponent is convenient and nice and not a time for you to start chirping.

Unless of course a bandwagon SDSU “fan” conveniently at the game to see Lute Olson’s Wildcats decides he needs to start the chirping.

Such became the case for us. Amidst a big Arizona run, one that essentially put the game away in the first half, with my Dad and me and three-quarters of the stadium on their feet cheering Steve Fisher’s forced time out, a San Diego weather fan turned to us and with a hideous scowl and the conviction of a person at his first basketball game turned to us and scathed, “GO HOME!”

Now let me go back to what I’d said earlier, about how my Dad is mild mannered. That’s an understatement. The dude is constantly cool, calm, and collected, a brilliant lawyer, with an answer to any and every problem. But amongst all of my grossly intelligent father’s talents, quick wit and humor are not his strong suits. Hence, neither is significant trash talk. He’s often left that to his two boys, the younger of which (not me) can be hellacious in an opposing arena.

But on this night, with my old man visiting one of his favorite cities, watching his favorite team with his childhood best friend who had gone to blows at my Dad’s defense on more than one occasion as grade schoolers and with his favorite son (yeah, I said that), well, my Dad overcame all of his innately trash talk prohibitive characteristics to provide the single greatest moment in trash talk history.

With the aforementioned San Diego State Bandwagoneer standing a row below us, scowling up and reveling in his mediocre Aztec glory at his witless “GO HOME,” and before I could get anything out regarding SDSU’s lack of relevant athletic anything or welcoming him to his first game, my father promptly and matter of factly, in a perfect tone of equal parts arrogance, certitude and go-fuck-yourself, told said Aztec: “Your lesson’s not over yet.”

My jaw hit the floor as the trash offender meekly turned around to take in the rest of the one-sided game, unsure how to handle the lesson he’d just received. It’s actually taken a few years for me to absorb the magnitude of that moment and just how perfect it was. If hyperbole will allow me, I’ve never been more proud of my Pops.

My immediate and distant futures undoubtedly contain road trips to many more Arizona games, hopefully being highlighted by attending a game on a Monday night in April. This weekend I’ll be in Seattle, once again attending an Arizona road game as part of a bigger celebration of my brother’s birthday. No doubt we’ll have a phenomenal time, remind a few Zags that Cinderella’s slipper can’t be that comfortable for that long, and hopefully not forget our winter coats.

But while I always have a great time watching the ‘Cats, that evening in San Diego will always be tough to top. 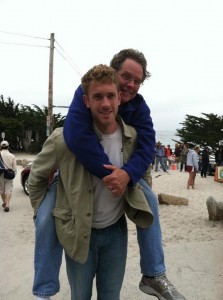