Conference play is here and while there are many legitimate basketball related things to watch for – like games and such – here are some under-the-radar stories to keep an eye on. Enjoy.

Is Utah going to be biblically bad?
Sure, the eyeball test tells us that the Utes are bad. As do the RPI rankings, scoreboards, statistics, and probably Krystkowiak himself. But isn’t that the fun of it? While we all root of eternal greatness, why can’t we eagerly anticipate a defeated season – in fact the second since 2008 (Oregon State). The Utes could be biblically bad but unfortunately so too is the conference, lessening the odds of an oh-for-eighteener. But hey, like that little kid in Angels in the Outfield kept saying, “It could happen!”

Will Kevin O’Neill try to fight another booster?
With all eyes on Matt Barkley, Lane Kiffin, and the now uninhibited Trojan football program, will KO go buck wild and fight anyone he wants? Odds are against it but again, we’re talking about this guy. A good quote and a coach who can get a lot out of his players, he does tend to leave a trail of destruction in his path. I recommend not getting in his way but then again, he probably stands to lose a lot more than you.

Joe Burton – Josh Smith: The Big-off
Read the following in your best Michael Buffer voice: in the Los Angeles corner, standing six-feet, ten-inches tall, and a soft three hundred and ten pounds…JOSH SMITH. From the Corvalis corner, a six-feet, seven-inch two-hundred and eighty pound baby face, Joeeeeeeee Burton! These two, hefty as they may be, manage to toss around the weight for good. Smith is still looking to find some semblance of conditioning and when he does he’s capable of big things. Burton has been a serviceable center, capable of putting up formidable numbers while also playing a facilitators role in Craig Robinson’s Princeton offense (3.8 apg). These two will rumble off just once this season, January 19 in Corvalis. 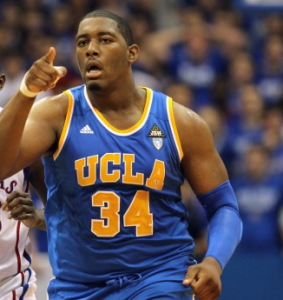 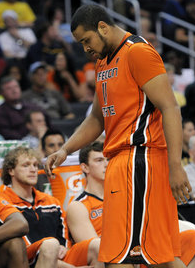 Will Sean Miller clear whatever is in his throat?
If you’ve ever watched Miller patrol the sidelines, you know he’s a pretty fiery dude. That said, he also is constantly hacking and coughing away, an assumed attempt to clear his throat. With another edge-of-your-seat-this-ain’t-gonna-be-easy type season in Tucson, Miller no doubt needs all of his voice to convey his message to the youthful Wildcats. Perhaps try some lozenges, Coach? 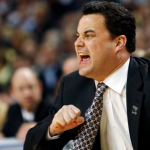 Who will be the first to posterize someone?
The hoppy Nick Johnson?