And here it is.

Round 1 of the Pac-12 Coaches Death Match opens today and voting will remain open through Monday, 2/27. Vote, share, comment.

On the surface, this would appear to be a cutesy battle. The ever grinning, cordial and kind LoRo squares off against the unsuspecting and perhaps aptly named, Dana Altman. A couple of Pacific North Westerners all granola, jogging, and North Face? Nah. The Nike Knuckler could care less if nary a swear word left Lorenzo’s smiling lips. He wants to put that legacy Husky into the canvas almost as bad as Romar would like to send Dana-poo right back to Creighton and his fourteen years of mid-major mediocrity. A Dawg and a Duck. Barks and quacks. Who’s louder?

The Colorado Cranium, no doubt an attacking fighter, will have his hands full in this trap of a 7/10 game. Do you really think after seeing what happened to an ill prepared PJ Carlesimo that Monty would take coach’s self defense lightly? No way. Like the Civil War, this should be a war of attrition, in which Boyle and his jumbo paws pound away at Papa Monty until one of the becomes an opportunist; at which point either Monty swiftly wins or Boyle wears him out for an eventual kill. The crafty vet should have something up his sleeve and is no softy – someone had to teach Jorge. Will Boyle bruise his way to the win or can the Bay Hopper finagle his way to Round 2? 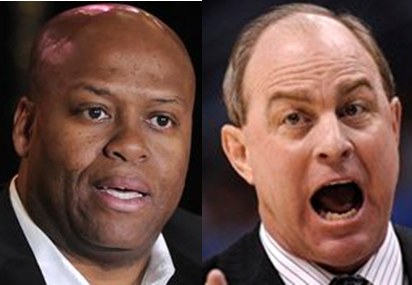 Yeah Robinson family, Let’s Move indeed. As the Capacious Corvallian looks to smash some domes – wouldn’t you if you lived in Corvallis while your kid sister flew Air Force One? – the Westwood Wailer needs a spark. And this time hiring an guru on the AAU circuit to reignite your recruiting efforts ain’t gonna cut it. This is “to the heart stop” if you read the non-rules and it’ll take more spine than suspending a malcontent for one half. Will CRob and the Secret Service handily eliminate Howland or could there be a little wizardry coming out of Westwood once again? 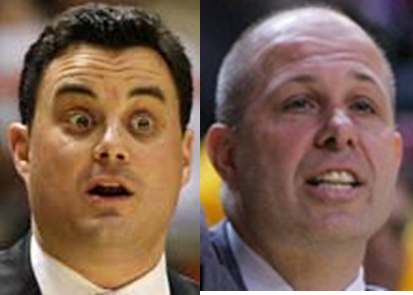 Awkward! Sendek used to be Miller’s boss. Now the boy faced Pittsburgher basically tells the Herbivore how it is. Or does he? Yeah, he pretty much does but maybe – just maybe – the Tempe Terror can conjure up and be his own James Harden and do something other than be just OK. While this one appears stacked well against Sendek, Whooping did spout off about the XU-Cincinnati fight and how it wasn’t all that bad. Have you seen Xavier’s record post melee? 9-10. So maybe he can rile himself up for this one, but will it translate?