The 8/9 matchup opened tight. Altman and the Nike brass threw all they could at sweet LoRo until they became just another moment that MJ will list as a failure for his post-third-retirement This is Why I Succeed poster. Reality of it is that the HecEd Hammer ended Dana; slapping him up and down the ring with a stack of Uncle Phil’s Benjamin’s until he cried “uncle” because Altman looks like a dude who needs to surrender by saying “uncle.”

Soon after the cleanup crew scraped the neon out of the mat, Boyle and Monty took center stage and this one went the distance. The eno-weathered veteran used his tact, wit, and GSW mandated self-defense to stay close to the thunder paws of the Colorado Cranium who never quite controlled the match but does appear to have the ability to kill a bear (see below). Alas, Tad advances. 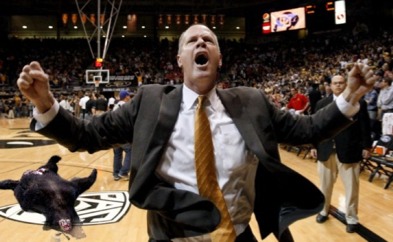 Courtesy of SkidMark at allbuffs.com

And then the Westwood Wailer and Capacious Corvallian decided to go ahead and take it to another level. Or was it a match no one wanted to win? However you slice it, this bout was decided by three votes. Three votes. Or roughly two fewer halves than Reeves Nelson was suspended for prior to being ousted not unlike his maligned coach by the biggest of Beavers.

The final tilt was not your classic case of saving the best for last as it was indeed the worst for last. Whooping took the Tempe Terror to task and didn’t look back. He received the most votes (110) in annihilating the Herbivore who received the fewest (35) then curled up in James Harden’s beard for a soft cry.

Be ready, get ready as Round 2 begins tomorrow and you know the top-4 seeds are itching to battle.

In fact, Bruizin’ Boozin’ Bozo just ate the entire backside of a cow and washed it down with a bottle of Jack while doing his clown makeup and staring down Ichabod who was simultaneously juggling (borrowing Bozo’s flaming juggling daggers) and holding crane posses for Miyagi in a fruitless effort to get the Cruel Cardinal to smile while he watched the Worst Cry Ever on repeat utterly stone faced. Of course K was just in the corner chewing metal.

One thought on “Round 1 Takedown Shakedown: The Results”