The Pac has definitely taken a turn for the defensive considering the days past. In 2001-02, the Pac-10 had seven of it’s teams scoring more than 73.1ppg. Today that number is just two, and they barely eclipse that mark.

So yeah, it’s a big deal to be named the Pac-12 dPOY in a day and age when defense is becoming central to the changing western style.

The candidates (and there are some good ones): 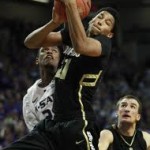 Here’s a dude I recently saw Seth Davis call the most underrated in the nation. I’m not exactly sure if this is a good distinction or not and Isn’t calling him underrated sorta like rating him? Alas, his play stands for itself. We’ve watched this dude defend the spectrum of sizes and shapes and he’s taken all comers. His length is something to behold. Many still feel he was a major snub from last year’s dPOY during the Jorge farewell tour, further adding to the underrated dialogue. Whatever you want to call it, this guy can lock down.

From the moment I saw Kazemi take the court, I was impressed with his rebound timing. I watched him elevate as others were being sucked down by gravity along with the ball. But the Iranian-born kid was going up, a position of strength, to capture that ball. To secure it. And he did. Like really well, amongst many other things. As the argument was made for him is POY, Kazemi has done a bit of it all and well.

Look, this is a two man race, but I wanted to be sure to include the athletic guy with a fro because he’s pretty darned good, too.

Pac-12 Defensive Player of the Year